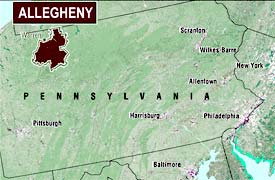 Since Pennsylvania’s gas drilling boom ramped up in 2008, companies have been fined regularly for environmental accidents — $23,500 here for spilling 5,000 gallons of waste, $15,557 there for spilling 295 gallons of hydrochloric acid. The fines often amount to slaps on the wrist for companies that stand to make hefty profits from their wells.

But the penalties just got a lot more serious for an owner of Kansas-based Swamp Angel Energy and for the company’s site supervisor, who pleaded guilty last week to felony violations of the Safe Drinking Water Act.

As part of a plea agreement with the U.S. attorney for western Pennsylvania, part-owner Michael Evans, 66, of La Quinta, Calif., and John Morgan, 54, of Sheffield, Penn., admitted dumping 200,000 gallons of brine – salty wastewater that’s created in the drilling process – down an abandoned oil well. The maximum penalty for both Evans and Morgan is three years in prison, a fine of $250,000, or both. Sentencing will be June 24. Attorneys for both men declined to comment.

According to Pennsylvania’s Department of Environmental Protection, which regulates oil and gas drilling, Swamp Angel has 77 active, permitted wells in Pennsylvania, all of them in McKean County. The company is also registered as a municipal and residential waste hauler in the state.

The lack of treatment options is expected to become even more critical in 2011, when the state has pledged to have stronger wastewater treatment regulations in place, forcing some plants that currently accept drilling wastewater to make expensive upgrades or to stop accepting it entirely.

Some companies are trying to solve the problem by recycling and reusing their wastewater. (With recycling, the industry is still left with dirty, hard-to-deal-with wastewater, but there’s less of it.)

According to acting U.S. Attorney Robert Cessar, authorities learned about the illegal dumping from a tipster. The EPA found that empty drums had been buried on the site and removed them after determining that they had contained non-hazardous waste.

Regional EPA spokeswoman Terri White said the EPA didn’t test to see if area drinking water wells had been contaminated by the brine, because the nearest residential well is about a mile away.

"And the other factor that we considered is that where the two guys dumped the brine was an old oil well," she said. "It was a deep well, much deeper than the shallow aquifer where folks get their water."

White said the brine was left in the abandoned well.

Asked whether the felony charges would prohibit Swamp Angel Energy from receiving permits to drill more wells, DEP spokesman Neil Weaver said in an e-mail, "DEP must consider compliance history as a part of our regulatory review process. Environmental violations, including federal violations, could affect a company's ability to acquire and maintain permits, certifications, authorizations and licenses to do business within the Commonwealth."

The wastewater problem resurfaced with another fine this week, when the DEP fined the borough of Jersey Shore $75,000 after its wastewater treatment plant accepted more drilling wastewater than the state allowed. As a result, the plant discharged contaminants, including fecal matter, into the Susquehanna River between September 2008 and May 2009.

Correction, Feb. 22, 2010: This post originally said that John Morgan was a subcontractor for Swamp Angel Energy. He should have been identified as the site supervisor. The story also implied that the Swamp Angel well was drilled into the Marcellus Shale. Although the well is located in the Marcellus Shale area, the story should have said that it was drilled into a different geologic formation.