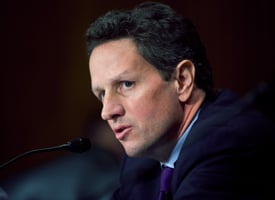 Timothy Geithner, the nominee to be secretary of the Treasury, moved one step closer to confirmation Wednesday -- but not until repeatedly acknowledging mistakes in both his personal taxes and in his role as a financial regulator.

Geithner, the president of the Federal Reserve Bank of New York, was warmly greeted but encountered tough questioning from Democrats and Republicans during his three-and-a-half-hour confirmation hearing before the Senate Finance Committee.

Sen. Ron Wyden, Democrat from Oregon, honed in on Geithner's oversight of Citigroup, the giant bank holding company that nearly collapsed last year. Regulation of Citigroup, which received a $52 billion government rescue, was the subject of a ProPublica investigation earlier this month.

Wyden, noting the Fed's "significant supervisory role" over Citigroup, then asked why Geithner missed obvious signals in 2007, such as the resignation of the company's chief executive in the wake of huge losses from real estate lending.

"The alarm bells were going off," he told Geithner, so "what would you have done differently?"

Geithner responded generally, acknowledging "failures in the checks and balances."

He added that "supervision could have been more effective."

Wyden interrupted, "Should your supervision have been more effective?"

Arizona Republican Sen. Jon Kyl raised other issues relating to government interaction with Citigroup but said they would be part of a lengthy list of written questions Geithner would need to answer before the Senate votes on his confirmation. Another Republican, Sen. Jim Bunning of Kentucky, said he too would submit written questions for Geithner.

Kyl had the testiest exchange with President Barack Obama's nominee, pressing Geithner repeatedly on his failure to pay self-employment taxes while working at the International Monetary Fund.

Kyl wanted to know why Geithner did not pay back taxes for the years 2001 and 2002 until two months ago, when the issue arose during the Obama transition's vetting process. In 2006, after an IRS audit, Geithner had paid self-employment taxes for 2003 and 2004.

"I didn't think about it again" after the audit, Geithner said.

But Kyl wondered whether he didn't pay because the statute of limitations for the 2001 and 2002 returns had expired by 2006, leaving Geithner without a legal obligation to pay. When Geithner fell back on some earlier explanations, Kyl reacted sharply.

"Would you answer my question rather than dancing around it?" he said.

Geithner said he simply hadn't considered the matter until "I was forced to go back and go through it again and think about it" during his confirmation process. "I don't believe, Senator, that I was avoiding my liability," Geithner said. "I made a series of mistakes."

Some senators seemed more interested in making statements than hearing what Geithner had to say. Both Sens. John Kerry (D-MA) and Pat Roberts (R-KS) spoke for more than their allotted five minutes before Geithner had a chance to briefly reply.