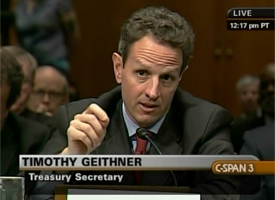 One of the first questions Tim Geithner faced this afternoon during a Senate banking committee hearing was about the same thing we've been focusing on: the lack of details in his new plan. This seemed like déjà vu all over again, said Sen. Richard Shelby (R-AL), pointing out that about four months ago, the previous Treasury secretary had made his way to Capitol Hill to tout a plan that was short on details and long on zeros.

Geithner admitted as much, calling the plan the "broad architecture" of an approach, but promised those details would be forthcoming. He then, unprompted, gave what he called a "candid" warning: This -- the big banks' troubles -- is going to be "an expensive problem for the nation," he said. He wasn't asking for more money today, he said, but that day might come; it depends on how his approach plays out. Here's the exchange: