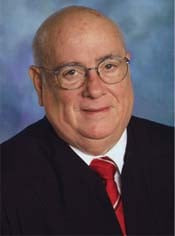 A federal judge who spoke at length with ProPublica about his experience working through about a dozen constitutional challenges mounted by Guantanamo prisoners is being asked by a detainee’s lawyer to remove himself from a pending case based on quoted portions of his interviews.

In one comment, Chief Judge Royce Lamberth of the U.S. District Court in Washington, D.C., said, "How confident can I be that if I make the wrong choice that he won’t be the one that blows up the Washington Monument or the Capitol?" In a recusal motion (PDF) filed Friday, lawyer H. Candace Gorman said this statement suggests that the judge’s personal fears – not just the facts of the case – will drive his decision whether to order the release of her client.

Sticky situations like this are one reason the vast majority of judges avoid talking to the press about pending cases. That means the public rarely sees their deliberative process – the thoughts they wrestle with, the ideas they discard – and is left only with their final written opinions, if they choose to write at all. In the Guantanamo cases, these decisions are literally opaque – they’re heavily blacked out for security reasons.

Lamberth and two of his colleagues gave detailed interviews for our article, which aimed to shed light on the usually obscure workings of the third branch of government in an area of unusually great public interest. Their comments lent fresh perspective to a long-running debate, recently chronicled at Scotusblog, about whether a law establishing a new preventive detention process would better protect public safety and detainees’ rights in the battle against terrorist forces.

They also ventured to sound human – not the first quality typically associated with the federal bench – by speaking of struggles not just of intellect but also of conscience.

For instance, Lamberth said, under the current system the judges are grappling with the prospect of keeping detainees in prison most likely for life based on far less evidence than the "beyond a reasonable doubt" proof that is required in ordinary criminal cases.

Were the judges too human? In Lamberth’s case, Gorman argues, yes. "[W]ill this Court hold Petitioner indefinitely in fear that it might make a mistake?" her motion asks. This fear, she claims, makes the judge improperly partial to the government’s position that he should deny the habeas petition of Abdal Razak Ali, an Algerian captured in Pakistan in March 2002, and endorse his continued detention.

There are different ways to look at all this. Most judges probably worry about making mistakes – perhaps the more troubling scenario is a judge who believes himself infallible – and it may be better to know they worry than to pretend they don’t. But what is good for the public to know could be prejudicial to a litigant – we’ll just have to see how this one plays out – and that’s what matters in court. Which brings us back to the general tendency of judges to stay mum. And which may explain why Gorman, who writes a blog about Guantanamo where she frequently criticizes government secrecy, believed she had the duty to press this unusual motion on behalf of her client against one of the few judges who has been transparent.

Both Gorman and Lamberth politely declined to comment on the pending motion.