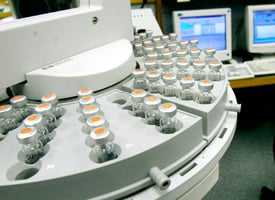 Forensic science has helped send thousands of suspected murderers, rapists and other alleged criminals to prison.

But according to a much-anticipated report released today by the nation's leading scientific research group, this evidence can't always be trusted. Calling the forensic science system "badly fragmented," the report's authors said their findings could trigger a massive overhaul of the nation's crime labs.

Evidence such as fingerprints, shoeprints, bite marks and hair has been commonplace in the courtroom for decades and popularized on TV shows like CSI. Today's report, however, concluded that independent research is needed to determine whether these methods are actually reliable. (Because DNA evidence has been better studied than these older techniques, the report largely sidestepped critiquing it, despite some instances of DNA testing errors.)

The report, commissioned by Congress and conducted by the National Academy of Sciences, painted a somewhat dire picture of the nation's crime labs. It showed poorly trained technicians using unsubstantiated methods to analyze cases in labs that are often underfunded or poorly supervised.

While the report notes that not all labs face these problems, it concluded that deficiencies are common enough to warrant significant reform.

"Reliable forensic evidence increases the ability of law enforcement officials to identify those who commit crimes, and it protects innocent people from being convicted of crimes they didn't commit," Harry T. Edwards, former chief judge of the U.S. Court of Appeals for the District of Columbia and co-chairman of the committee that produced the report, said in a statement. He added, "There is a tremendous need for the forensic science community to improve."

Most significantly, and perhaps most controversially, the report recommended overhauling how the federal government approaches forensic science by taking it out of the hands of the U.S. Justice Department, which has been criticized for having a lax approach. Congress should create a new, independent federal agency to police crime labs, the report said.

We called a Justice Department spokesman for comment but have not heard back.

The report, which took more than two years to complete, stopped short of recommending a review of past convictions that were potentially influenced by faulty forensic techniques. The committee that wrote the report included Judge Edwards, lawyers, scientists and crime lab officials.

Though its findings are non-binding, the report, mandated by Congress, could influence reform legislation.

One senator, Patrick Leahy, the Vermont Democrat who chairs the Judiciary Committee, indicated that changes were to come. "There appear to be far too many weaknesses in our system of forensic science," Leahy said in a statement. "These problems must be corrected as soon as possible."

"This unprecedented report shows that many forensic techniques which are relied on in courtrooms every day lack scientific support," said Peter Neufeld, co-director of the Innocence Project, a nonprofit legal group that works to exonerate innocent people. The report, Neufeld said, "is a major breakthrough toward ensuring that so-called scientific evidence in criminal cases is solid, validated and reliable."

While the report is being heralded by defense attorneys, some crime lab directors also welcomed it, seeing it as an opportunity to raise awareness about the stresses and strains labs face. As we have detailed before, many labs have large and lengthy backlogs of evidence, including DNA, in part due to a lack of resources and staff.

"We as a community have been talking about the research [and funding] needs for years," said Dean Gialamas, director of the Orange County crime lab and president of the American Society for Crime Lab Directors. "This is consistent with what we've been saying all along."

Gialamas took issue, however, with some of the report's critique on crime labs. "They paint a picture of a general lack of science in what we do, and I don't think that's true," he said. "You're going to find that [the science] is reliable."

Legal experts and defense attorneys, meanwhile, have warned that faulty forensic science has been compromising the justice system. Though DNA testing has helped to free more than 200 wrongfully convicted people, many of their convictions were based on invalid testimony from crime lab technicians, according to Brandon Garrett, a professor at the University of Virginia School of Law.

Garrett presented to the academy a study of trial transcripts from 137 cases where DNA evidence exposed wrongful convictions. The study, which was conducted by Garrett and Neufeld, of the Innocence Project, found that 60 percent of these cases included testimony from forensic analysts that was misstated or unsupported.

In an earlier study, Garrett said that forensic evidence was the second leading type of evidence supporting wrongful convictions, behind false eyewitness testimony.

"The defense community has been raising questions about forensic science for decades," Garrett said in an interview. "It should be the job of law enforcement and forensic scientists to correct their own mistakes."

Last year, an audit of the Detroit Police Department's crime lab found significant errors in about 10 percent of 200 random cases involving firearms analysis. Shortly after the audit became public, the lab was shut down.

Problems like Detroit's conflict with the conventional perception of forensic science.

"The public has this image, just looking at CSI, that forensic science is perfect," said Michael Saks, a psychology and law professor at Arizona State University. "It's just a TV show."

The report recommended that labs be separated from law enforcement agencies to prevent undue influence on technicians.

"This would allow labs to set their own budget priorities and resolve any cultural pressures caused by the differing missions of forensic science labs and law enforcement agencies," the report said.

The report also said that the new federal agency overseeing forensic science must be independent, meaning it should not be housed in the FBI or the National Institute of Justice, or NIJ, the research arm of the Justice Department. While the report didn't explicitly criticize those agencies, it described their leadership efforts as "modest."

"If NIJ were more actively promoting research, we might not be where we are at this point," Saks said. "We kind of have to go back 100 years and do the research that's needed."

In addition to sponsoring the recommended research, the new oversight agency, which would be called the National Institute of Forensic Science, would establish mandatory certification standards for forensic science analysts and accreditation for the labs. Only a few states require labs to meet high quality assurance standards and require analysts to be certified, according to the report.

The report declined to estimate what it will cost to implement its recommendations.

While law enforcement associations likely will challenge some of these efforts, Gialamas said crime labs are ready for reform.

"This is something the forensic science community has been asking for."