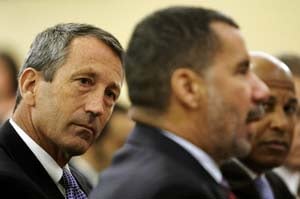 Governors from four southern states and Alaska have said they’ll refuse at least some of the $787 billion stimulus package Congress hopes will rescue the flagging economy. But an analysis of economic indicators shows that these states – each in its own way – are suffering disproportionately from the economic crisis or longstanding social problems.

South Carolina, where Republican Gov. Mark Sanford was the last state executive to say he would accept stimulus funding Friday, has the second-highest unemployment rate in the country at 11 percent in February. The state trails only Michigan, where troubled auto companies are shedding workers.

Sanford plans to reject money to expand unemployment insurance, as well as state fiscal stabilization funding, unless he can use it to pay down debts. The White House says that money is for building schools, retaining teachers and other mainly educational purposes. Budget issues have forced South Carolina to consider laying off teachers, whose average salary of $45,758 was already at the low end among states.

South Carolina is also struggling with a budget deficit – 16 percent of total spending this year, the ninth-widest gap in the country. Sanford has said he wants to avoid commitments to long-term spending, such as hiring new teachers, because it could increase future deficits.

In Louisiana, GOP Gov. Bobby Jindal has said he wants to reject unemployment insurance, too, as well as $9.5 million in Medicaid funds that would buy health insurance for people who have recently lost their jobs.  Louisianans have struggled with health care coverage even in good times: 18 percent of the state’s residents didn’t have insurance in 2007, making it the country’s fifth-worst performer.

Jindal also said he would reject money to expand unemployment insurance benefits because there are too many strings attached. Though Louisiana’s unemployment rate is lower than average, at 5.7 percent in February, the benefits the state pays to the out-of-work are the third-lowest in the country, with an average of $207 a week.

In Texas, where Republican Gov. Rick Perry plans to decline money to expand unemployment insurance, there are also relatively few jobless people, but as we’ve reported before, fewer than one in four unemployed Texans ever sees a benefit payment. Like Jindal, Perry said he’d turn away $550 million to extend benefits to 45,000 of those people because he’s concerned he’d have to raise taxes in two years to sustain the program after stimulus funding runs out. Haley Barbour, the Republican governor of Mississippi, wants to reject $53 million for the same reason.

Those lucky enough to have jobs in Texas pay the second-lowest tax rates for unemployment insurance in the entire country at 0.31 percent of total wages. Louisiana and Mississippi are not far behind, at 0.32 percent and 0.35 percent, respectively. By contrast, Pennsylvania workers pay a full 1 percent.

The other stimulus-opposing governor, former Republican vice presidential candidate Sarah Palin of Alaska, says she’s refusing even more money than her southern counterparts, a full 45 percent of the stimulus money available to Alaska. She wants to reject funding for all programs other than capital improvements.

In Alaska, unemployment grew to 8 percent in February, worse than the national average. The state has the seventh-highest rate of uninsured people, and more families in trouble rely on a federal program, Temporary Assistance for Needy Families, than in any of the other states in which governors plan to reject the extra help.