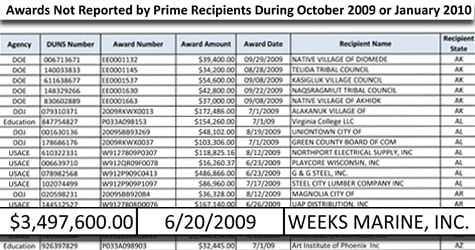 Weeks Marine won a $5 million stimulus contract to dredge the Mississippi River Delta in Plaquemines Parish, La. The family-owned firm put 37 people to work from June to September. When the project ended, it reported all this for public view on the government's stimulus Web site, Recovery.gov.

Yet Weeks Marine recently found itself on a government list of "two-time losers," accused of flouting stimulus rules by failing to file two required reports telling taxpayers how it spent their money.

"I don't know why we're on the list," said Win Apel, general counsel for the New Jersey-based dredging company. "We did in fact file the report."

Weeks Marine is not an anomaly. ProPublica identified as many as 60 other suspect cases on the list of 360 contractors, local governments and nonprofits compiled by the White House Office of Management and Budget. When asked about the apparent problems, the government's stimulus oversight panel confirmed that the list had mistakes.

"The list, which we characterized as two-time losers, was certified by various federal agencies," said Ed Pound, spokesman for the Recovery Accountability and Transparency Board. "It's bad enough when recipients make errors. It is far more frustrating when agencies do."

When Congress passed the American Recovery and Reinvestment Act last year, it set up an ambitious plan to publicize how the money was spent. Nearly everyone who got a grant or contract was required to file quarterly reports detailing what they did with the money, how far along the project was and how many jobs they created.

According to the White House, 98 percent of recipients complied with the law. Federal agencies were required to find out who didn't. The budget office compiled the list of supposed scofflaws and sent it to the Recovery Board, which sought to shame them by posting their names (PDF) on Recovery.gov.

"The two-time losers -- those who failed to file reports in the last quarter of 2009 and the earlier reporting period -- should really be embarrassed," Earl Devaney, chairman of the board, said in a news release. "They took millions of dollars and then thumbed their noses at taxpayers."

ProPublica checked the two-time loser list by comparing project award numbers and dollar amounts against other data that had been reported on Recovery.gov. The comparison suggested that as many as 60 projects on the list may actually have been reported to the government.

Of those, we sent a sample of 11 projects to the Recovery Board, which so far has verified that six had filed reports and were erroneously included on the losers' list.

Weeks Marine, for example, filed its report in October. The report is on Recovery.gov, but with a bigger award amount than shown on the "losers" list. The company sent a letter last week to Devaney and its congressmen asking to be removed from the list.

A similar thing appears to have happened to Luhr Bros., an Illinois company dredging the Ohio River in Paducah, Ky. The company's contract is reported as $4.7 million on Recovery.gov, but the OMB list had the firm down for $1.7 million.

The Finger Lakes Migrant Health Project, a clinic in upstate New York, has received three stimulus grants. But one of them, for $1.2 million, is missing from Recovery.gov. Mary Zelazny, the clinic's CEO, said the clinic filed the report and provided ProPublica with a copy of a confirmation e-mail she received from the government.

Corps of Engineers officials said the agency is trying to figure out how the recipients who actually reported ended up on the list of shame. A Health and Human Services spokesman said that its review missed some health clinics that had incorrectly filed as subrecipients of grants instead of primary recipients.

Two quarterly reporting deadlines have passed so far, one in October and another in January. Recipients accused of missing both range from John Dewey College in Puerto Rico to the Native Village of Diomede, Alaska, an ice-capped island of 146 people in the Bering Strait, where -- as Sarah Palin once said -- residents can actually see Russia about 2.5 miles away.

Some who received the largest unreported grants or contracts -- including the Ramah Navajo reservation in New Mexico, Del Norte Clinics of California and Kingridge Enterprises of Little Rock, Ark. -- did not return calls for comment.

In at least one case, the contractor denies that his project is a stimulus project. Eyak Technology, a Virginia communications firm owned by Alaska natives, received a $650,000 no-bid contract to work on a radio tower for U.S. Customs and Border Protection.

But when Customs drew up the contract it failed to include the stimulus provisions, and Eyak has refused to allow the agency to amend it. Customs spokesman Tara Dunlop said the agency is pursuing "all available legal avenues to ensure Eyak complies with the law and files the required reports."

Brad Elmquist, Eyak's vice president of operations, said his firm is complying with the law because there's nothing on the contract that says it's funded by the stimulus.

The stimulus contained no penalties for those who fail to file their reports. Devaney, the government's stimulus watchdog, has testified before Congress in support of establishing penalties, such as fines.

OMB spokesman Tom Gavin said only one recipient had been penalized in that way so far.

That recipient, the child hunger group Share Our Strength, lost its $87,000 stimulus grant from Americorps to teach low-income families how to cook healthy meals on a budget.

Share Our Strength spokeswoman Margie Fleming Glennon said the group initially didn't realize there was a requirement and then encountered technical problems filing its second report because the charity's contractor registration number had expired.

Most Americorps workers whose positions were funded with stimulus money won't lose their jobs, said Eric Schweikert, the group's chief financial officer. Share Our Strength will find a spot for them on another federal grant project or pay their salaries with other funds until their current project ends.

"We really regret that we couldn't figure out the system fast enough," Schweikert said.

But not everyone flagged as a non-reporter was as gracious.

The Lebanon, Mo., police department was on the "losers" list for not reporting on a $1.2 million stimulus grant from the Justice Department to hire more officers. Jeff Merriman, a consultant who manages the grant, said the department filed a report with the department but not a required report for Recovery.gov.

"I'm not sure where the disconnect happened here, but if the Recovery Act board says we knew about it, I can tell you we did not," Merriman said. "Regardless, as grant recipients we should have known."

Even so, he called Devaney's comments "uncalled for and not reflective of the intent of those accused."