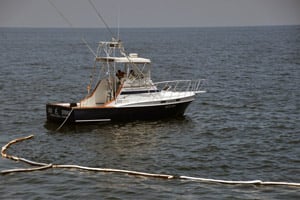 As we've reported, workplace safety experts have expressed concern that Gulf oil spill responders aren't getting enough safety training. On Wednesday, we spoke with a federal official who said the four-hour safety course that BP is providing to Gulf cleanup workers lacks basic information on health risks and is too short to cover the necessary material.

Joseph Hughes, director of the worker training program at the National Institute for Environmental Health Sciences, said the course fails to incorporate important information. Among the subjects not included are chemical inhalation, the health effects of dispersants, and the risks of direct contact with weathered crude oil.

Hughes' agency, part of the Department of Health and Human Services, helped develop the training. "We tried to recommend what we thought the right training topics were, but all of those were not included," he said.

As we reported on Wednesday, cleanup workers are continuing to suffer health problems that they believe to be related to chemical exposure, including vomiting, dizziness, and nose and throat irritation.

Hughes also said the course's four-hour duration -- a fraction of the 24-hour training usually required for cleanup workers who may be exposed to hazardous materials -- is insufficient and rests upon a faulty interpretation of safety regulations. In 1990, the Occupational Safety and Health Administration issued a directive following the Exxon-Valdez disaster that allowed the minimum training to be cut to four hours for workers performing low-risk tasks such as beach cleanup.

"The idea of the Exxon-Valdez exemption is that they would not have direct contact with crude oil or weathered oil," Hughes said. However, he said that some spill responders receiving the four-hour training, such as booming and skimming workers on vessels, are "definitely having direct oil contact."

BP spokesman Toby Odone stated that the safety trainings are appropriate for the work people are doing. "Training for Vessels of Opportunity and shoreline workers is 4+ hours and includes properties of oil, insect bites, heat, marine operations such as laying and collecting boom," Odone wrote in an e-mail. The Vessels of Opportunity program employs local boat operators and crews in cleanup activities.

Odone also wrote that workers going into oiled areas are accompanied by a technician with 40 hours of training, and that the training was approved by the government. "It was developed with OSHA and approved by OSHA and the US Coast Guard," he wrote.

OSHA is in charge of monitoring workplace safety for the cleanup. We at ProPublica have been trying to get in touch with officials there since Monday to discuss the safety trainings, but haven't yet gotten a response.

Hughes said that his office is pressing Unified Command -- the interagency spill response team that consists of BP, Transocean, the Coast Guard and numerous federal agencies -- to implement an eight-hour training course for those at greater risk of contact with hazardous materials. The course would include the chemical exposure curriculum that is not provided in the current trainings.

"The group that I'm still concerned about is the booming and skimming workers," Hughes said. "There's an effort under way to increase the training of those workers that's being discussed at the highest level."

On Wednesday, Aubrey Miller, senior medical adviser in Hughes' agency, testified to a House subcommittee that OSHA is "working with BP to develop a new eight-hour curriculum for worker safety and health training," according to a transcript of his remarks provided by the agency.

Hughes said he had not heard any dates for when this eight-hour training program would start.

As it stands, Hughes said the training goes against the precautionary principle -- the concept that the possibility of harm is enough to warrant action to reduce the risks to public health.

"We thought it was backwards," he said of the current curriculum, "that it had a reduced amount of protection for workers."