This story was co-published with The Daily Beast. 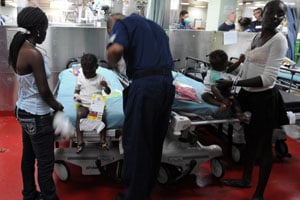 The U.S. Navy's vast hospital ship, the Comfort, departed Haiti Wednesday and is due back to its home port of Baltimore this weekend. In the harbor off of Port-au-Prince, its gleaming white topsides accented with red crosses have been a conspicuous symbol of U.S. generosity since the country's devastating earthquake.

But for 11 days before it departed, as some hospitals on the ground in Haiti overflowed with patients, no inpatients with earthquake injuries were treated onboard. Instead, the Comfort's personnel engaged Monday in an "abandon ship drill," and its overhead paging system has recently heralded the visits of a host of dignitaries, including the secretary of the Navy, who came to congratulate the crew.

As the staff awaited direction, debate brewed over whether it was an appropriate time to leave -- as many American and Haitian officials believed -- or whether the unique capacities of the ship should continue to be used to save lives beyond treating acute earthquake injuries, as some health professionals urged.

Not long after the earthquake, the hospital offered services that are scarce in Haiti, including CT scans, intensive care and advanced surgery in sterile conditions. Over a period of around six weeks beginning Jan. 19, staff members performed more than 800 surgeries and treated close to 900 patients, many of them severely injured, according to military public-affairs officers. The care the ship provided drew kudos from Haitians and civilian aid workers.

But last month the Comfort stopped taking admissions and began the careful and painstaking work of transferring its remaining patients to other facilities, according to military officers on board and doctors who received the Comfort's patients. On Feb. 24, workers mopped the near-empty wards and waited for word on the ship's deployment status. One of the last of the two dozen inpatients -- a tearful woman with an injured right leg -- was lifted into a helicopter on the way to a field hospital set up by Harvard physicians near Haiti's border with the Dominican Republic.

The decision to release the ship from service in Haiti was made by the U.S. Southern Command, which judged its humanitarian relief mission to be completed, according to a press release issued last week. That mission was defined mainly as treating critically injured earthquake survivors and international responders. By contrast, a similar hospital ship, the USNS Mercy, responding to the 2004 Indian Ocean earthquake and tsunami, had only just arrived on the scene at a similar time point as when the Comfort began drawing down its operations. The Mercy then stayed in Indonesia for five and a half weeks.

All land-based field hospitals and clinics operated by the U.S. Department of Health and Human Services, which provided surgery, wound care and childbirth services, have also closed in recent days. "The medical mission here in Haiti is converted," said Capt. Jim Imholte, who served as the head of the HHS mission in Haiti. Acute surgical needs, he said, were giving way to needs for rehabilitation and primary care. "It's a natural transition point for us back to the Haitian government and the medical institutions that are here and the [non-governmental organizations] that are here that have the skill sets perhaps in that area that we don't necessarily have."

One HHS field hospital was converted into an outpatient clinic run by a small charity. There, steps away from a soccer field filled with thousands of the dispossessed living under sheets and tarps, a curling piece of paper affixed to a wall announced the change in services in Haitian Creole: "We don't deliver babies. We don't do operations. We don't take people with gunshot wounds. We don't take people with serious injuries." Where patients could go to get those services was unclear.

U.S. officials say that decisions about withdrawing the highly visible -- and expensive -- governmental medical assets were made based on factors such as changing needs and capacities in Haiti. The number of patients requiring urgent surgery for wounds sustained in the quake has sharply declined. "The needs have shifted, and there are other more effective ways to meet the current needs," said Dr. Ron Waldman, who coordinated the medical response for the U.S. Agency for International Development.

The agency has provided nearly half a billion dollars in aid to date, including the donation of federal field hospital caches to Haitian hospitals and the ongoing support of private charities that are offering health-care services such as mobile medical clinics for the displaced. "USAID recognizes that the needs of the Haitian people remain great," Waldman said, "and will continue to adapt its programs to the needs even as they continue to change."

The Haitian government, which faced pressure from fee-for-service doctors who lost business to foreigners providing free health care, also supported the Comfort's departure. "The Haitian government thanked them for the good job that they did and invited them to leave," said Dr. Jack Lafontant, a Haitian physician who served as a liaison between national health officials and the Comfort. "After two to three weeks, the field hospitals, the Comfort and even the public hospitals in Haiti did not receive as many patients," he added. "There is no more emergency."

But that characterization was disputed by longtime aid workers who expect the emergency phase of Haiti's disaster to continue for a long time, as the rainy season begins and hundreds of thousands continue to live with inadequate shelter. Other Haitian physicians pointed to the need for skin grafts, complicated wound treatment and the correction of surgeries performed hastily under less-than-optimal conditions. "You can't expect to come in for six weeks, restore [medical services] to what they were previously, and leave," said Dr. Vanessa Rouzier, who works with the Gheskio medical clinic in Port-au-Prince. "Everybody knows full well that's inadequate." While international planning to support Haiti's evolving health care needs is under way, she said, "the concern is that all these institutions are leaving and there's still a huge gap."

A short boat trip away from hospital ship's empty wards, one type of gap was evident. Volunteers at the partially destroyed general hospital said that patients in the crowded, bare-bones medical ward are visited rarely by doctors, and nurses are in short supply.

On a recent day, a child died for lack of an oxygen regulator, a common piece of equipment that fits atop an oxygen tank, according to leaders of the medical organization Partners in Health. "The system, such as it is, is pretty well broken," said Dr. James Wilentz, a cardiologist at Lenox Hill Hospital in New York who recently volunteered at the university hospital. "I don't know whether there was that much of a system prior to this."

Bringing advanced medical care to a developing country that had little of it prior to a disaster presents built-in ethical questions: What level of care must be restored before it is acceptable to depart? And does "earthquake-related" medical need include only broken bones suffered during the event -- much as the Comfort defined it -- or does it extend to children injured weeks or months later playing around mounds of sharp concrete rubble, or an asthma attack brought on by living outdoors breathing burning garbage in a tightly packed camp?

"The problem is that need is never going to go away 100 percent," said Dr. Miriam Aschkenasy, who served as a rotating director of the Fond Parisien Disaster Recovery Center in Haiti run by the Harvard Humanitarian Initiative. Aschkenasy said the timing of the Comfort's departure was reasonable. "They're not a solution. They're an emergency bridge. To me, that's what I see their role is, and I think they played that perfectly."

Whether outside health organizations have risen to replace that bridge fully remains to be seen. A number of non-governmental field hospitals have remained open, helping to replace collapsed or damaged Haitian health facilities. Foreign medical volunteers, including many Americans, continue to work alongside Haitian colleagues at public and private hospitals around the country. However, as some medical groups depart, others committed to staying for a longer period are experiencing difficulty covering all needs. And development experts say that strengthening Haitian government institutions -- a goal of international assistance before the earthquake -- has scarcely begun.

On a morning in late February, an inflatable field hospital established by Doctors Without Borders had 20 percent more patients than beds. Dr. Michel Jannsen, then the hospital's head, said nearly 100 additional patients arrived in a single day after military and governmental field hospitals from Europe, North America and Asia as well as smaller non-governmental organizations had pulled out of the country.

The patients, he said, "are not cured. They are still sick." What's more, he said, given the massive destruction of the city and the few options for decent shelter, even those well enough for discharge and outpatient care had no place to go. Two months after the quake, hundreds of thousands of displaced Haitians are still squatting in vast fields under sheets and tarps. As surgical activities wound down on the Comfort, Lt. Cmdr. Thomas Olivero, department head of the ship's main operating room, said staff members were still itching to offer aid. "Particularly military people, when they're deployed they like to be kept busy," he said. "You want to take care of people. We know there's a lot of people out there that still need help."

Experts agree that support to Haiti's medical and public-health infrastructure will be needed for the long haul to protect the investments the U.S. has already made. "There are big challenges ahead," said Dr. Helen Miller, a pediatric emergency physician from Oregon who worked at a government field hospital last month. People living in crowded camps are at risk for infectious-disease outbreaks, she said, and their regular illnesses may worsen under the stressful conditions. "This is a marathon."