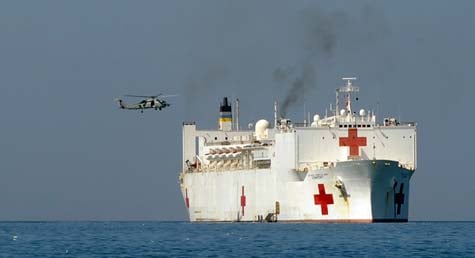 PORT-AU-PRINCE, Haiti – In turning tents into sophisticated operating theaters and deploying a gleaming hospital ship, the USNS Comfort, to the coast of Port-au-Prince, the U.S. government has brought needed medical services to thousands of Haitian earthquake survivors.

But after top U.S. doctors operate on severe injuries and treat infections, it is up to Haitian family members to see their loved ones through the long process of healing.

The ability of the U.S. system to connect with these family members nearly three weeks after the Jan. 12 disaster remains uncertain at best.

Navy helicopters often whisk the ill and injured from one medical site to another without documentation, leaving family members behind. As of last week there was no phone number for relatives to call to check on hundreds of patients being treated aboard the Comfort.

"Patients actually die from that, when they’re left alone with no family," said Nick Goldsberry, a registered nurse working at a tent hospital in Port-au-Prince with San Diego-based International Relief Teams.

Kevin Tweedy, a public information officer for a different field hospital in Port-au-Prince run by the U.S. National Disaster Medical System, struggled to find information for concerned relatives last week. On Tuesday he gripped a small cell phone to his ear. "People are getting upset," he told Keziah Furth, an American nurse volunteering as a liaison officer for the Comfort. "They’re beating on the gates. They want to know where their family member is."

The family of one of those patients spent last week in anguish. Gerd Belizaire, a 35-year-old engineer, was buried under rubble after the earthquake. Days after being rescued, he developed difficulty breathing, and the oxygen level in his blood dipped dangerously low. Doctors at the U.S. government field hospital put a tube in his throat to help him breathe, and one of Belizaire’s brothers, Ketler, scoured the city for a tank of oxygen. 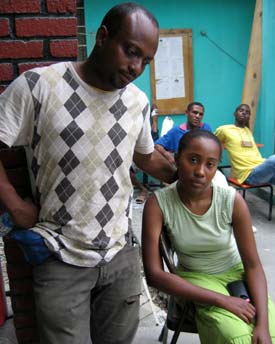 Belizaire remained in critical condition, and a week ago Saturday the American doctors arranged urgent transport to the Comfort for intensive care. His wife, mother and brother bid him emotional goodbyes.

All week the family was unable to find out what happened to him. On Wednesday, a relative in the United States said he had reached someone by phone who informed him that Belizaire had died.

But Belizaire’s brothers and wife in Haiti were unable to confirm that information, even when I tried to help them navigate the bureaucratic labyrinth. They made daily visits back to the field hospital, and we placed phone calls to at least a half-dozen phone numbers on the Comfort. "It’s killing me," Belizaire’s wife, Giovanni, said on Wednesday.

On Sunday a relative, Dashley Beaubrun, said in an e-mail that the family had been told Thursday that Belizaire was alive, but had received no information since that time. A brother, Vladimir Gousse, said by phone that he was still awaiting news.

But a final call to a military public affairs officer on Sunday night revealed the worst. A patient matching Belizaire’s age, last name and with a similar first name, "Gend," had been recorded as deceased.

He had been dead on arrival to the Comfort, a day after he was picked up for urgent transport. Where he spent the intervening hours was unknown. According to the ship’s public information office, Belizaire’s body was released to the Haitian Ministry of Health more than a week ago. But the family has been unable to locate him.

"We looked at all the bodies, all the files, we can’t find his name," Belizaire’s wife said Monday. "I don’t know what to do. If he’s dead, where’s the body?" 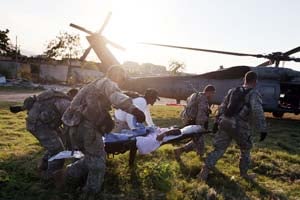 The reasons for the bureaucratic tangle are unclear. Patients who arrive on the Comfort are immediately entered into an electronic record-keeping system. Tracking them should be a matter of a few mouse clicks. The hospital ship has supported numerous international relief efforts for years, so the need to provide answers to families should not have been a surprise. The Comfort had been deployed to Haiti before, as recently as last spring.

To be sure, the massive scale of the disaster, the deaths of Haitian officials and destruction of infrastructure have posed numerous challenges to coordination and communication. Last week, public affairs officers with the U.S. Joint Information Center for Haiti could not provide an explanation for the delay in making patient information available to families, except to say that the Comfort was working with non-governmental organizations to come up with a solution. "It’s very, very important to us," said one officer. "As soon as we can get that information out, we’ll let everybody know."

Lt. David Shark, a Navy assistant public affairs officer working on the Comfort, said on Sunday that a patient hot line for the ship was established on Saturday. However, he did not have the number and did not provide it after several requests. He also said that family members are allowed to travel to the ship with patients, and some have done so. But many field hospital personnel had been unaware of that. 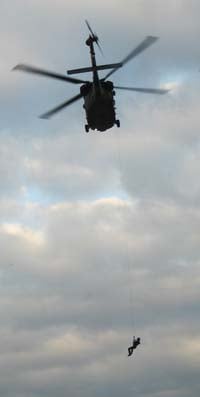 Medical transports with unaccompanied children have been another disturbing problem. Last week, a U.S. Navy helicopter hovered over the American field hospital. A soldier descended a zip line carrying a baby whose head was grossly enlarged. The only information the hospital was given was that the baby had "water on the brain." The helicopter's propeller wash sprayed debris into the eyes of two medical workers and wreaked havoc in an adjacent "tent city" where thousands huddled under sheets propped up by tree branches.

Roughly a dozen other children were delivered to the American field hospital in recent days without family members, documents or even minimal information on where the children were being transported from.

Vanessa Rouzier, a pediatrician at a Haitian medical clinic, Gheskio, that is hosting the American field hospital, was outraged by the practice. "To me it’s shocking and unethical," she said. "It has to stop. You end up with orphans who may not be orphans."

Rouzier said rumors were flying among Haitians that foreigners were abducting children or stealing patients’ organs. (On Sunday, 10 members of the Central Valley Baptist Church in Idaho were arrested in Haiti amid accusations that they tried to spirit children out of the country to the Dominican Republic.)

"Many people are getting offended," Rouzier said. "‘How can you take my sister for five days now and not even tell me if she’s alive or dead?’ That would be a scandal in the U.S. Then they take minors without parents for amputations."

Staff at the American field hospital began making arrangements for a nearby orphanage to accept the unaccompanied children after they were treated. In the meantime, the Americans turned the hospital’s post-operative tent into a nursery and assigned staff to provide comfort and care. Some bonded with the children and began asking whether adoption might be possible.

Ultimately Rouzier and her colleagues located close relatives of nearly all of the children.

She and other Haitians said they were impressed and overwhelmed by America’s generosity, even as they were concerned by the missteps.

"When they leave, who’s going to stay behind to pay the price for it?" she asked. "Us."