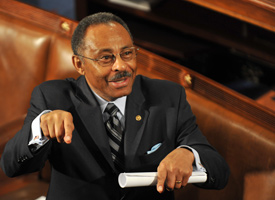 It might be time to get used to calling Roland Burris a senator.

But now, consistent with existing state law, Quinn says a special election should only be held if Burris resigns. (I wouldn't count on it, governor.) Otherwise, Burris will hold the post until the next federal election in 2010.

State Democrats, who control Illinois' Senate, followed Quinn's lead yesterday, defeating a bill that would have allowed for a special election. The bill died in committee after a 3-2 party-line vote.

"I think it's fair to say [Democrats] have killed that idea," said Republican state Sen. Matt Murphy, who sponsored the bill.

The remaining viable threats to Burris' seat are two investigations: one by the Senate Ethics Committee and another by a local prosecutor exploring perjury charges surrounding his testimony before the state House.

State Republicans originally called for a special election when former Gov. Rod Blagojevich appointed Burris to the Senate late last year, just weeks after Blagojevich was arrested for trying to sell that very seat. Efforts to boot Burris received a boost last month when the junior senator admitted to lobbying Blagojevich insiders for the Senate job and even attempting to raise funds for the former governor. The disclosures contradicted sworn testimony he'd given before an Illinois House of Representatives panel in January.

Quinn's change of heart, meanwhile, came after meeting this week with a group of black lawmakers who support Burris and have threatened his detractors with losing black support in future elections.

"Those people will run at their peril," said Chicago Alderman Freddrenna Lyle, city chairman of the Cook County Democratic Organization.

Quinn, who is running for governor in 2010, quickly saw the error of his previous hard line. Burris' lawyer last week also vowed to challenge a special election in the courts.

"We can talk about this until whenever, but Roland isn't going any place," said another alderman, Ed Smith.

Of course, we're talking Chicago politics, and the situation could still change.

Much will depend on the outcome of the local state's attorney's investigation into whether Burris criminally perjured himself. The Chicago Sun-Timesreported today that the prosecutor has asked federal authorities who covertly tape-recorded Blagojevich and several of his allies to turn over any recordings involving Burris.

Of particular interest to the Republican prosecutor, John Schmidt, are conversations between Burris and the former governor's brother Rob Blagojevich, who asked Burris to raise money for the Blagojevich campaign.

While the investigation lags on, state Republicans might continue to propose special election legislation. But Burris could still run in a special election -- and don't think he's ruled out a campaign in 2010, either.

Burris has launched a Web site, supportburris.com, to advertise and collect donations for a 2010 Senate run. The site went live in January when Burris became a senator, but it went unnoticed until this week. Also in January, Burris filed preliminary running papers with the Federal Election Commission.

Portions of Burris' Web site are blank, such as "endorsements" and "issues." But the page designed to collect campaign donations is alive and functional.

The "Burris for Senate" address listed on the Web site matches the location of Burris' office when he was a lobbyist.

If he were to run in 2010, Burris is likely to face a crowded field of powerful Democrats, including Illinois Treasurer Alexi Giannoulias, who plays basketball with President Obama, and William Daley, the former commerce secretary and Chicago Mayor Richard M. Daley's brother.