Recently declassified CIA documents provide the first detailed look at the interrogation in Thailand of Abd al-Rahim al-Nashiri, the al-Qaida prisoner whose detention, officials say, was overseen by Gina Haspel.

Nashiri, a 37-year-old Saudi, was implicated in the bombing of the USS Cole, a Navy destroyer, while it was docked off the coast of Yemen in 2000. He was captured in Dubai in mid-October 2002. Emirati authorities handed him over to the CIA, which “rendered” him first to Afghanistan where he was briefly held at a secret prison called the “Salt Pit.” He was then flown to another secret prison in Thailand codenamed “Cat’s Eye.” 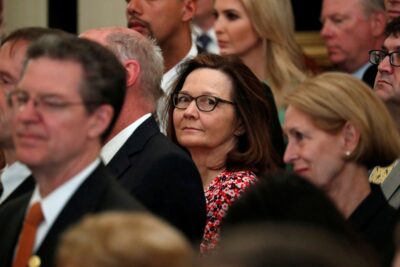 Nashiri arrived in Thailand on Nov. 15, according to a report by the CIA’s inspector general. Newly declassified documents show Nashiri suffered many of the same harsh methods the Justice Department had approved in August for the questioning of Abu Zubaydah.

Many of the declassified documents are dated November or December 2002. The precise dates are redacted, making an exact chronology impossible to determine. But there are clues that show a rough sequence of events. Several documents cite a calendar of Nashiri’s “enhanced interrogation,” which the inspector general’s report and other sources say began as soon as he arrived in Thailand. The documents allude to Nashiri’s transfer to another secret prison in Poland, which took place on Dec. 4. According to the inspector general’s investigation, Nashiri was waterboarded on the 12th day of his detention in Thailand, which would have been around Nov. 27. (A report on CIA interrogations by the Senate Select Committee on Intelligence said that Nashiri was waterboarded “at least” three times in Thailand.)

As the CIA prepared to send Nashiri, described as a “longtime major al-Qaida personality and terrorist operations planner,” to the black site in Thailand for interrogation, this cable, apparently from headquarters, formally approved the use of harshly coercive methods “as necessary.”

2. Day Five: Put Him in A Box and Let Him Think

On the fifth day of the “aggressive interrogation phase,” interrogators told Nashiri he had divulged “a great deal of information,” apparently about an aborted 2002 al-Qaida plot against civilian oil tankers transiting the Strait of Hormuz.

The interrogators were not satisfied, noting that Nashiri had declined to discuss what he did in April 2002 after the tanker plot was called off. The interrogators locked him in a confinement box and urged him to think about what he wanted to say.

3. Day Seven: “We Are Not in the Business of Kissing Your Ass.”

On day seven of the harsh methods, interrogators told Nashiri he had “begun to answer questions in a useful way.” As a reward, they told him he’d receive a shave, haircut and pants. But as the interrogators left his cell, Nashiri asked them to clean his fingernails, or to let him do so.

“This is not — not — a hotel,” an interrogator said. “We are not in the business of kissing your ass.” A security team forcibly shaved Nashiri’s head and beard and put him back in a box.

On day eight, the interrogators readied Nashiri for walling, a technique in which detainees were slammed against a specially designed wall by a towel wrapped around their neck.

“I understand you wanted someone to trim your nails for you yesterday,” an interrogator said. “That made me mad.”

After Nashiri was bashed against the wall, he sat down and answered questions. For giving possibly useful information, he may have received solid food, sleep on a mat, and a towel.

On the 12th day, an interrogator told Nashiri he had “turned on the tap a tiny bit.” But now he must open the “valve” and let information “flow.”

The interrogators ordered Nashiri, crying, back onto the waterboard. “Over the subject’s protests, the water technique was applied,” the cable states. “Interrogators told subject they were going to do this again, and again, and again until subject decided to be truthful. Subject mumbled something unintelligible.”

Nashiri sat on a plastic chair as interrogators warned him that he needed to provide useful information or the “other people” — from an unnamed country — would take custody of him and “certainly kill him.”

The same day, an interrogator told Nashiri he needed “tenderizing” like a “fine steak” before answering the questions. Nashiri cried as the team explained their plan.

On the 16th day of harsh methods, the CIA enacted a fake, theatrical rescue from a mock attack by violent “men in black” — the on-site security team. The idea was to terrify Nashiri into divulging information to the interrogators who “rescued” him.

After the sham assault, Nashiri sat in his now quiet cell, shook his head and sobbed. “Did they hurt you?” someone asked. Nashiri was lead to the corner of the cell where he sat on tissue paper he had folded into a pad.

In the day’s first “session,” interrogators questioned Nashiri about Mukhtar, an alias for Khaled Sheik Mohammed, the al-Qaida leader American intelligence had identified as the architect of the 9/11 attacks. In the second, afternoon “session,” Nashiri was told he’d soon be moved to a “much worse place.”

In this cable, dated December 2002, an interrogator again warned an apparently uncooperative Nashiri during his last session in Thailand about the new “really terrible” place that awaited him.