This story was co-published with MSN Money. 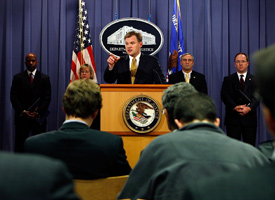 Get ready for the Siemens World Corruption Tour, 2001-2008. Siemens pleaded guilty last week to corruption across the globe, receiving a record-setting fine -- $1.6 billion (which sounds like a lot, but really, it's just 0.3 percent of their revenue during those years.)

In announcing the fine, the Justice Department and the Securities and Exchange Commission released formal complaints detailing how Siemens bribed government officials all around the world. (We published a story in Sunday's New York Times profiling the Siemens accountant at the center of the scandal.)

However -- and this is a big "however" if you're into accountability -- they released none of the names of the corrupt bureaucrats that took the cash or the Siemens officials who paid it.

This was done, Justice folks said, to protect the integrity of ongoing investigations and to comply with privacy laws in various countries.

At the hearing prosecutors seemed a bit wistful that they couldn't reveal the names, which were provided to Judge Richard Leon in a sealed file. Lori Weinstein, the dogged prosecutor who pursued the case, said the department could not provide exact names. But, she said, the documents were sprinkled with clues to provide "sufficient clarity" for the court to figure out who was who.

Some identifications are vague -- there are plenty of "government officials." But others are more specific. (Hello, "Wife of the former Nigerian Vice President, a dual U.S.-Nigerian citizen.") ProPublica figures that with the help of readers, we might be able to ID at least some of these folks. Below, you'll find descriptions of the bribees. Send us a name and a link sourcing the information.

To get things started, take the case of the Argentine identity card contract. The SEC's complaint said that Siemens paid bribes to a certain "president of Argentina" who left office in 1999. Not too hard to figure out that one -- Carlos Menem ran the country from 1989 to 1999. Looks like the buck really did stop there.

This is by no means an exhaustive list. As of last count, 16 countries had investigations ongoing into Siemens. Our list below includes only those bribery schemes detailed in the formal complaints by the Justice Department and the Securities and Exchange Commission.

E-mail us if you find clues to figure out the other grafters.

So who are these folks? Send us a name and a link sourcing the information.