From Jan. 1, 2015, through June 1, 2020, the University of North Carolina at Chapel Hill reported 28 lab incidents involving genetically engineered organisms to safety officials at the National Institutes of Health, according to documents UNC released to ProPublica under a public records request. The NIH oversees research involving genetically modified organisms.

Six of the incidents involved various types of lab-created coronaviruses. Many were engineered to allow the study of the virus in mice. UNC declined to answer questions about the incidents and to disclose key details about them to the public, including the names of viruses involved, the nature of the modifications made to them and what risks were posed to the public, contrary to NIH guidelines.

UNC said in a statement that it “notified the proper oversight agencies about the incidents and took corrective action as needed.” 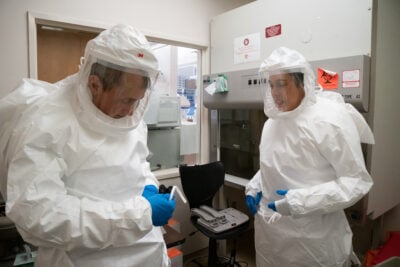 Reports indicate UNC researchers were potentially exposed to lab-created coronaviruses in several incidents since 2015. These incidents highlight the risks even in the most secure and respected research facilities.

August 2015: Two researchers required medical monitoring after a mouse briefly escaped inside one of UNC’s biosafety level 3 labs. The mouse, which had been infected with an undisclosed type of “mouse adapted” virus, squirmed free of a researcher’s gloved hand and onto the lab floor. It was caught inside the lab and returned to its cage. UNC officials refused to disclose the name of the virus, but NIH officials told ProPublica it was a type of “SARS-associated Coronavirus.” Incident reports say the mouse was no longer believed to be infectious and the researchers were wearing protective gear including powered respirators. Still, the incident was deemed a potential exposure and the workers were required to report their temperatures and any symptoms twice daily for 10 days. Neither was sickened.

October 2015: Three UNC researchers were potentially exposed to an undisclosed “mouse adapted” virus when a shallow container fell to the floor of a biosafety level 3 lab, spilled and potentially created aerosolized droplets. NIH officials told ProPublica the incident involved a type of SARS-associated coronavirus. Even though the three researchers in the lab at the time were wearing safety gear and powered air-purifying respirators, university safety officials deemed it a “potential exposure.” The workers were placed on medical surveillance for 10 days. None were sickened.

November 2015: Two UNC lab workers were potentially exposed to a lab-created type of MERS coronavirus when an empty cage with contaminated animal bedding spilled on the floor of a biosafety level 3 lab. A researcher was in the process of transferring MERS-infected mice to a clean cage when the dirty cage was knocked over. The two workers in the UNC lab at the time of the incident left and allowed the aerosolized particles from the incident to settle to the ground before returning to decontaminate the area. Even though the two workers were wearing head-to-toe protective gear and powered respirators, the incident was deemed a potential exposure. They were placed on medical surveillance for 10 days and required to report temperatures and any symptoms twice daily. Neither was sickened.

February 2016: A mouse infected with an undisclosed “mouse adapted” virus bit a researcher’s finger through two layers of gloves as she tried to weigh it in a biosafety level 3 lab. NIH officials told ProPublica that the incident involved a type of SARS-associated coronavirus. Following lab procedures, the researcher disinfected her gloves and allowed the wound to bleed for a minute before washing her hands with soap and water for five minutes. She was evaluated at UNC’s employee occupational health clinic where the medical director discussed options for isolating the researcher. Instead, “the researcher was required to wear a surgical mask while in public and at work” and to report her temperature and any symptoms twice daily. The reports note the Centers for Disease Control and Prevention was also alerted because the virus involved in the incident is on a list of dangerous pathogens that are federally regulated. The report says “updates were provided to the CDC throughout the medical monitoring period.” The researcher was not sickened.

April 2017: A plate containing virus from lung samples from a mouse infected with an undisclosed type of virus was dropped by a researcher in a biosafety level 3 lab, spilling a small amount of virus material onto an incubator door and the floor. While UNC wouldn’t disclose the virus’s name, NIH told ProPublica that it was a type of SARS-associated coronavirus. In this incident, the university’s employee occupational health clinic said it would not be necessary for the three researchers who were in the lab to report their temperatures to the clinic because the spill was small and the researchers’ safety gear was intact. The workers were advised to do their usual daily self-monitoring for any respiratory symptoms or temperature. No further information about the workers’ health was included in the incident reports.

April 2020: A UNC scientist underwent 14 days of self-quarantine at home after a mouse bite caused potential exposure to a strain of SARS-CoV-2, the virus that causes COVID-19, that had been adapted for growth in mice. The incident in a biosafety level 3 lab happened when a researcher attempted to read the ID number on a tag on a mouse’s ear. The mouse flipped over in the researcher’s hand and bit an index finger through two layers of gloves. It did not appear to break the researcher’s skin, but UNC told NIH in its reports that “given the uncertainty surrounding the exposure, we are treating this as a medium/high risk exposure.” The researcher was instructed to self-quarantine and do twice-daily temperature checks. UNC also notified the local Health Department. No further information about the worker’s health was included in the incident reports.