A pattern of deception ran through the Trumps’ real estate deals since the mid-2000s. Not only were the Trumps more than the mere licensors they claimed to be, extracting millions in fees from nearly every facet of these projects, but they often misled buyers and investors on key information — such as the level of sales and the Trumps’ role and investment in the deals. (Read our full investigation.) The Trump Organization did not respond to our questions, and the White House didn’t have a comment.

Claim: Donald Trump claimed $365 million in sales in a 2007 letter to The Wall Street Journal.

Claim: Trump announced the hotel/condo was “pretty much sold out” in April 2006, according to a broker who attended the presentation.

Reality: 62 percent of units were sold as of July 2006, according to bank records that emerged in a court case.

Claim: Condos “sold out,” Trump told The Associated Press in 2005

Reality: About 25 percent of units were sold by 2011, according to press accounts.

Reality: As of three months later, 79 percent of the units were pre-sold, according to Moody’s.

Claim: In 2008, Ivanka told reporters that 60 percent of units had sold.

Reality: A Trump partner’s affidavit revealed that 15 percent had been sold at the time.

Claim: The building “sold out,” Trump told The Wall Street Journal in 2007.

Reality: The developers failed to sell a minimum of 70 percent of units, according to a Trump company letter that year, which deemed that a violation of its contract.

Claim: In a 2009 interview, Ivanka referred to the property as “virtually sold out.”

Reality: 24.8 percent of units had sold, according to a 2016 bankruptcy filing by the developers.

Projects Where the Trumps Suggested They Were Developers, Partners or Equity Owners (They Weren’t)

More than 50 buyers claimed Ivanka said the Trump Organization was a developer on the project at a 2007 sales event, according to a lawsuit quoted by Univision.

“I am excited to be building Trump at Cap Cana,” Trump was quoted saying in a 2007 press release, according to Univision.

Trump called the hotel and tower “my latest development” in a letter announcing the project.

“TRUMP INVESTS IN GEORGIA” read banners for the project, according to The New Yorker. Asked by a Fox anchor what he was “investing in,” Trump responded, “I’m doing a big development” in Georgia.

“I am honored to develop this extraordinary high rise with my partner Roger Khafif of the K Group,” Trump said in a 2009 marketing statement.

Trump claimed an ownership stake in a news article at the time, stating it was less than 50 percent, then adding: “But it’s a substantial stake. I recently said I’d like to increase my stake but when they’re selling that well they don’t let you do that.”

In the final episode of season five of “The Apprentice,” Trump announced the project on national TV, saying “that’s why I’m building the magnificent Trump Hotel and Tower Waikiki.” In 2007, he told The Wall Street Journal: “This building is largely owned by me and being developed by me.” 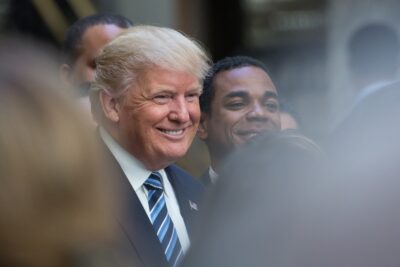