A judge has dismissed a number of charges filed by a South Texas county against a former official accused of fraud in the construction of a $232 million border fence funded by the Department of Homeland Security.

The ruling prompted Hidalgo County on Monday to withdraw all remaining legal actions against Godfrey Garza Jr., the former chief of its drainage district, who oversaw a project to improve the county’s levee system and build a fence to stop illegal immigration and drug smuggling.

Judge Martin Chiuminatto of state district court in Hidalgo County told lawyers for the county and Garza that the evidence presented to support the county’s allegations of fraud was not strong enough to send to a jury, according to a transcript of the hearing late last month. Chiuminatto also dismissed charges against Garza’s wife, children and their companies.

“I’ve wrestled to find enough smoke to suggest that there’s a fire someplace,” Chiuminatto said in granting dismissal of the charges.

Garza’s attorney said the county had forced his client to spend hundreds of thousands of dollars to defend himself against “meritless allegations.”   Garza “remains upset that he had to go through something like this, but he’s happy this part is over,” said Ethan Shaw, an Austin attorney.

County officials said they planned to appeal the judge’s dismissal. They also said they withdrew accusations of bribery and racketeering in order to protect their legal options. The county could file a lawsuit in federal court to pursue its case against Garza.

“[T]here is a significant amount of evidence establishing wrongdoing against the defendants,” said County Judge Ramon Garcia, the county’s top elected official, in a statement. “The court’s rulings are erroneous and they will be appealed.”

The county filed its lawsuit last year, accusing Garza of overcharging on the contract to build the levee fence and of sending work to Valley Data Collection Specialists, a company owned by his sons and later his wife.

Garza defended himself by noting that county elected officials, who also serve as the board for the drainage district, had approved all spending and contracts involved with the levee fence.

The county’s allegations centered on 22 miles of combined levee-fence built in Hidalgo County with local and federal funds some 10 years ago — a precursor to President Donald Trump’s planned border wall. Homeland Security funneled $174 million to the county for the project, while promising to exercise “substantial federal involvement” to make sure the money was spent well.

But an investigation by ProPublica and The Texas Tribune found that Homeland Security rushed to build the project and paid little attention to how the county spent the money — some of which flowed to Garza and a company he owned. 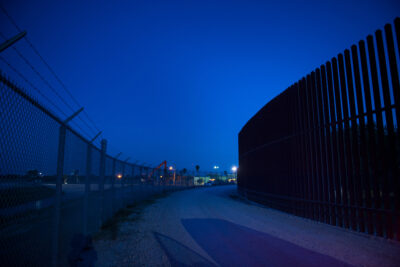 The latest lawsuit filing in Hidalgo County talks of kickback deals worked out over drinks and steak dinners.

Garza, the longtime general manager of the drainage district, had persuaded county elected officials to let him resign his post, then hire him back the same day as a contractor to oversee the district. In 2007, Garza signed a contract with the county which paid his company, Integ Inc., 1.5 percent of every dollar spent on the levee-fence project. Garza and his firm made $3.7 million from the deal. Federal law generally prohibits such contracts.

The investigation also revealed that construction firms hired by the county to build the levee-fence subcontracted work to a firm owned by Garza’s sons and later his wife. U.S. law normally forbids such conflicts of interest. Valley Data Collection Specialists received at least $1.6 million worth of contracts.   Among the firms that hired Valley Data was Dannenbaum Engineering, a Texas corporate powerhouse with deep ties to Texas’ Republican establishment. Dannenbaum’s offices were raided by the FBI in April. It’s unclear if the agency is investigating the levee-fence project.