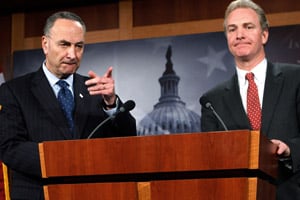 The Supreme Court recently freed corporations to spend more money on aggressive election ads. But if businesses take advantage of this new freedom, the public probably won't know it, because it's easy for them to legally hide their political spending.

Under current disclosure laws for federal elections, it's virtually impossible for the public to track how much a business spends, what it's spending on, or who ultimately benefits. Experts say the transparency problem extends to state and local races as well.

"There is no good way to gauge" how much any given company spends on elections, said Karl Sandstrom, a former vice chairman of the Federal Election Commission and counsel to the Center for Political Accountability. "There's no central collection of the information, no monitoring."

Companies invest in politics to win favorable regulations or block those "that could choke off their business model," said Robert Kelner, chairman of Covington & Burling's Washington, D.C., political law group. But they'd rather hide these political activities, he said, because they fear backlash from customers or shareholders.

For instance, a company may want to help Democratic politicians who support health care reforms that would benefit the company, but it worries about offending "Republican shareholders who may care more about their personal ideology than about their three shares of stock in the company," said Kelner, who says he represents many politically active Fortune 500 companies. "The same would be true on the other side of the political spectrum."

Businesses must reveal their identities on publicreports to the Federal Election Commission if they buy advertising on their own. But one popular and perfectly legal conduit for companies wanting to influence politics under the radar is to give money to nonprofit trade groups such as the U.S. Chamber of Commerce.

The Chamber and its national affiliates spent $144.5 million last year on advertising, lobbying and grass-roots activism -- more than either the Republican or Democratic party spent, according to a Center for Responsive Politics analysis of public records -- while legally concealing the names of its funders. The Los Angeles Timesreported this week that the Chamber is building a grass-roots political operation that has signed up about 6 million non-Chamber members.

Some of the positions the Chamber has successfully advanced on behalf of its donors include a nationwide campaign to unseat state judges who were considered tough on corporate defendants and opposition to a federal bill that would have criminalized defective auto manufacturing.

Now the Jan. 21 Supreme Court ruling that increases the potential political clout of businesses is drawing fresh attention to the problem of tracking them.

That decision (PDF), Citizens United v. Federal Election Commission, allows corporations to run television ads that don't merely speak to an issue but say outright whether a candidate should be elected, and allows them to do so any time they want to, using their general funds. The ruling also gives nonprofit groups like the Chamber these new freedoms, because they are technically structured as corporations.

Before, corporations had to rely on employee and shareholder contributions to a separate political account to finance the most explicit commercials and, in the months before an election, any issue ads that mentioned a candidate. Although the decision addressed federal election rules, its constitutional rationale also dismantles similar restrictions in 24 states.

Soon after the ruling, two Democrats -- Rep. Chris Van Hollen of Maryland and Sen. Charles E. Schumer of New York -- announced they were writing a bill to make it easier to tell which companies are backing which ads in federal elections. An outline (PDF) of that bill, which is expected to be introduced this week, proposes forcing nonprofit groups to identify those who fund their political commercials.

At present, nonprofit groups don't have to disclose the sources of their advertising money, unless the donors specified that their contributions were intended for political ads.

"Unless you're sort of dumb enough to designate your contribution to the Chamber," said Meredith McGehee, policy director of the Campaign Legal Center, "no one will ever know who's the source of those funds."

Politically active nonprofits exist across the ideological and policy spectrum and include unions as well as trade groups. Their funders include both corporations and individuals, some of them very wealthy. But campaign finance experts say groups that advocate specifically for business tend to have the greatest resources, simply because corporations have the most money to give.

The lack of tracking mechanisms sometimes leaves company officials themselves in the dark about their organization's political activities, said Adam Kanzer, managing director and general counsel of Domini Social Investments, which files shareholder resolutions to push corporations to adopt self-monitoring and disclosure practices.

"In a lot of our conversations with companies, they say, 'We don't know exactly how our money is getting spent. It's hard to get those answers,'" Kanzer said. One major drug manufacturer, he said, signed on for voluntary disclosure after learning that its funds had supported a state judicial campaign that many voters -- who could be customers or shareholders -- viewed as racist.

The public price of spotty disclosure is not being able to gauge the real effects of corporation-backed politics, McGehee said. She questioned one argument, often made by defenders of the Citizens United decision, that the 26 states that have long allowed unlimited corporate advertising in their elections haven't suffered more political corruption than the rest of the nation.

"How would you know? Most of those states have next to no disclosure," McGehee said. Corporations "could be buying outcomes left and right, but because of no disclosure, we don't know." A 2007 examination by the National Institute on Money in State Politics found that, while 39 states required some degree of disclosure by political advertisers, the laws in most were riddled with loopholes. Only five states required enough detail to link sponsors with specific ads, the report said.

Rep. Van Hollen said the disclosure requirements he and Schumer are drafting would uncover the corporate political money flowing through nonprofit channels.

"If corporations spend money in these campaigns, we cannot allow them to hide behind sham organizations and dummy corporations that mislead voters," he said in a written comment to ProPublica. "Voters have a right to know who is delivering and paying for the message."

The requirements would apply to unions and liberal nonprofits as well as trade groups, according to the early outline of the bill. The proposal mentions additional transparency requirements -- such as mandating corporate disclosures to shareholders and "stand by your ad" appearances by CEOs of companies that finance commercials directly -- and seeks outright bans on political advertising by government contractors, bailout recipients and companies significantly controlled by foreigners.

A strong disclosure law would be "hugely effective" in revealing who is paying for political speech, said Trevor Potter, a former FEC chairman and head lawyer for John McCain's presidential campaigns, who is now general counsel at Campaign Legal Center.

But precisely for that reason, Potter said, politics may get in the way of any serious reform. He expects trade groups on the right, unions on the left and other cause groups across the board to fight hard against such legislation.

Asked to comment on the push for more disclosure, the Chamber's chief legal officer and general counsel, Steven Law, instead attacked the political motives of the proponents. "Unions overwhelmingly support those who are pushing this legislation," he said in an e-mail. "This isn't about reform, it's about politicians trying to secure advantages for themselves before an election."

That reaction drew fire from one of the nation's most politically active unions, the Service Employees International Union, which also declined to comment on the new disclosure proposals. "The coming flood of corporate and foreign money into our elections through the U.S. Chamber of Commerce is a threat to democracy, plain and simple," said Anna Burger, SEIU's secretary-treasurer, in an e-mail. She called on legislators to "drag the Chamber's practices into the light of day."

The Chamber revealed more about its view of disclosure in an amicus brief (PDF) it filed in the Citizens United case on behalf of the 3 million business members it says it has. It supported the plaintiff, a nonprofit corporation called Citizens United, which wanted the Supreme Court not only to lift corporate advertising bans but also to strike down the existing disclosure requirements.

The Chamber argued that those requirements inhibited corporations from speaking out. If the public discovered that corporations were "taking controversial positions," it might punish them, the brief said. As an example, it pointed to a 2005 boycott of ExxonMobil products after the public learned the company was lobbying Congress to open the Arctic National Wildlife Refuge to drilling.

That argument failed to persuade the high court, which by an 8-1 majority decided to leave the current disclosure laws intact.

Transparency is important, wrote Justice Anthony Kennedy for the majority, because it helps voters "give proper weight to different speakers and messages," and because it allows citizens to "see whether elected officials are 'in the pocket' of so-called moneyed interests."