Homeowners share their stories: ProPublica queried 373 homeowners from across the U.S. about their experience trying to get help.

Mortgage servicers regularly make errors and break the rules of the government's mortgage modification program, according to hundreds of homeowners who responded to a ProPublica questionnaire.

For example, all homeowners who are rejected are supposed to receive a formal denial from their mortgage servicer, according to the program's rules. But 136 homeowners reported that they had been rejected from the program without receiving a formal denial. Additionally, homeowners reported more than 1,000 instances of mortgage servicer errors, including losing documents and giving false information.

ProPublica received detailed responses from 373 homeowners -- all of whom applied to get a modification through the administration's foreclosure prevention program -- and they tell a consistent story. Seeking a modification has been an infuriating, stressful nightmare: a black hole of time lost repeatedly calling an 800 number, faxing and mailing the same documents over and over, and coping with the ramifications of errors made by poorly trained bank employees.

Here's what those homeowners told us:

While our respondents were self-selecting and thus are not necessarily a representative sample of all homeowners seeking a modification, the results give a detailed look at the problems we've been hearing about ever since the modification program launched in April 2009. The program provides subsidies to mortgage servicers, the companies that process mortgage payments and foreclosures, to provide modifications that reduce payments to a set, low level.

Who responded: Most were still waiting for help. (*This category includes homeowners who said they’d been denied a modification at least once, but were still seeking one. It may include some who were previously in a trial.)

The trials are supposed to last only three months, but have lasted at least twice that long for hundreds of thousands of borrowers. Despite violations of the program guidelines such as the extended trials, the Treasury Department has not penalized any servicers.

The experience, homeowners told us, isn't getting any better. We asked homeowners still in the process if their experience had improved in recent months. Only 47 of 281 said it had. More than 100 said it's getting worse.

Here are the highlights from their responses:

The application process drags on and on. For most, it's lasted more than a year. As a result of the delays, homeowners fall further behind, putting them in danger of foreclosure and making it less likely they'll qualify for a modification. About two-thirds of these homeowners were still current on their mortgages when they began the process, but most have now fallen behind. 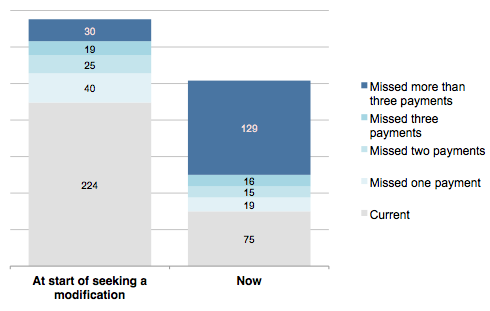 Falling behind: Many homeowners defaulted while seeking a modification.

Seeking a modification not only takes a long time, but can be time-consuming. Nearly half of the homeowners reported spending more than 10 hours per month (collecting documents, waiting on the phone, etc.). Most said they call, fax or mail once a week or more.

Time drain: Each month, homeowners spend many hours trying to get help.

Many complained of speaking with an exhausting catalog of call center employees. "Just to name a few: I have spoken with Richard, Sheronda, Krisit, Alyssa, Vanesa, Walter, Eden, Porcha, Donald, Lady, Gary, Leo and Kelly," said Christina Pandora, who is trying to hang on to her home in Center Conway, N.H.

82% of respondents said they don't trust their servicers to make a good-faith effort to evaluate them for the program.

John Mechem, spokesman for the Mortgage Bankers Association, said: "While 14 months can be an extremely long time to a borrower in distress, it also reflects the difficulty of completing a workout." The servicer might evaluate the homeowner for a variety of options, he said, sometimes restarting the process if the homeowner starts down one path and turns out not to qualify.

Mortgage servicers not only delay the process, but make a host of errors. The most common problems had to do with servicer mishandling of documents. On average, homeowners who completed the questionnaire have been asked to submit the same documents more than six times. The most common reason for having to resend the documents -- in over 270 cases -- was that the servicer claimed never to have received the documents or had simply lost them. The next most common reason was that documents were outdated. Homeowners frequently complain that servicers take so long to evaluate modifications that the documents become outdated and they must be sent again. That happened in 252 cases. In about 200 cases, homeowners were told their documents were incomplete.

"It's like a bad joke on a version of 'Groundhog Day,'" said Kim Camacho, a homeowner from Arizona who said her servicer has asked for the same documents over and over.

Mechem, of the MBA, said servicers "have gone to great effort and expense to improve document handling to try and avoid this happening." He added that some of the requests and delays may be because servicers have to collect new income information each time a homeowner's circumstances change, such as a job loss.

Servicing employees frequently, and incorrectly, suggest homeowners should fall behind on a mortgage in order to get help. Though servicers and housing counselors agree it is never a good idea to fall behind on your mortgage if you can help it, 175 homeowners reported being advised to do just that.

Servicers often make mistakes that can result in denial. More than 200 homeowners said their servicer had claimed they hadn't sent in documents that the servicer had never requested. Nearly 150 said their servicer falsely accused them of not responding to attempts to contact them, and 135 said a servicer had made an error in calculating their income, perhaps the most important factor in whether a homeowner qualifies for a modification.

The reason for denial is often unclear. Most denied homeowners reported hearing different and sometimes conflicting reasons from different servicer employees for why they didn't qualify for a modification. Two-thirds of those who had been denied -- 174 customers -- said they had that experience.

Under the government program, if a homeowner applies for a modification and is rejected, the servicer is required to provide a written denial, which is important because it allows homeowners to verify the information the decision was based on. But a majority of the respondents who were denied said they never received a rejection letter. Another 15 percent said they got one only after asking for it.

The MBA's Mechem emphasized that servicers have been required only since the beginning of this year to provide written denials and said that there may be cases where a homeowner is not owed one because the homeowner never formally applied for the program. The program rules define a formal application as submitting income information either in writing or over the phone.

ProPublica has been asking homeowners since last summer about their loan modification experience, and we've heard from over 1,000 homeowners. Over the last month, 373 respondents filled out the questionnaire in response to a request we e-mailed to hundreds of homeowners and posted on our site. Thanks to loansafe.org for posting our callout. If you're a homeowner who has sought or is seeking a mortgage modification, we want to hear your story.