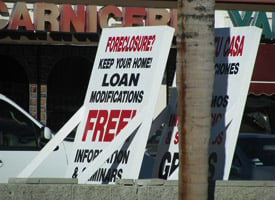 Last week, Christina McGrath of Riverside, Calif., got a loan modification. Now she has some advice for the millions of homeowners out there still seeking one: Call 10 to 15 times a day. Ask for the president's office. Get informed. Don't take "no" for an answer.

"The only way I got this was by being a royal bitch," she says.

The Obama administration's Making Home Affordable loan modification program was launched on March 3 with the goal of helping up to 4 million homeowners avoid foreclosure. Under the program, the government offers incentive payments to loan servicers to reduce eligible homeowners' mortgage payments to 31 percent of their monthly income. Most of the top loan servicers have signed up to participate, which means they're obligated to offer all qualifying borrowers a modification with the government's terms unless an existing contract with the owner of the loan bars them from doing so.

Servicers have offered more than 100,000 Making Home Affordable loan modifications so far, according to the Treasury Department. But a rapidly rising rate of foreclosures threatens to outpace these efforts. As is, servicers can barely keep up with the torrent of calls from homeowners seeking modifications, housing experts and borrowers tell ProPublica. And as the backlog piles up, homeowners and housing counselors are citing delays, confusion and other more serious hurdles to taking advantage of the administration's plan.

McGrath says the loan modification she ultimately got after "three months of hell" wasn't even through the government's program, but the terms are similar.

Amber Nadwodney, a Chase customer from Hoffman Estates, Ill., says that after her paperwork was misplaced twice, she was told she'd have to wait three to four months before being contacted again. Tom Kelly, a spokesman, says Chase is trying as hard as it can to keep up with the demand. "It's a challenge to do it as quickly as we'd like to," he says.

Chase takes 8,000 to 10,000 calls every day about the administration's program, according to a May 14 Treasury Department press release (PDF). Kelly says the company has more than 3,000 employees working on loan modifications, and it hires hundreds more each month.

"The system is clearly overwhelmed. Servicers are overwhelmed," says Ray Neirinckx, the coordinator of Rhode Island's Office of Homeownership and a foreclosure-prevention advocate. He notes, however, that the crush of interested homeowners is a sign that the program is well-designed.

Veronica Raphael, a foreclosure specialist in Westchester, N.Y., got so frustrated with the delays that she filed a complaint with the New York State Banking Department against Countrywide, now owned by Bank of America, and Wells Fargo last month, citing unresponsiveness and lost paperwork. Since then, she said, they've gotten more responsive. Neither Wells Fargo nor Bank of America responded to requests for comment.

Roughly 230 of her agency's clients have applied for a Making Home Affordable loan modification, she says. No one has gotten one yet. She notes, however, that some may not be eligible.

Gary Fitz, a Wells Fargo customer from Mission Viejo, Calif., says he has endured lost paperwork and frustrating delays, too. But more troubling to him, he says, is that the company told him he wasn't eligible for the Obama administration's plan because he is still current on his payments.

Fitz isn't the only one who has heard this. "I've had a couple people tell me, gee, I might as well become delinquent then, so I can qualify for this program," says Catherine Amos, executive director of Grand Valley Housing Initiatives in Colorado. Housing counselors say they would never tell a homeowner to do this.

The administration's plan is, in fact, available to borrowers who are current on their payments, and the government even offers extra incentive payments to servicers that modify before a borrower defaults.

Fitz says a Wells Fargo employee told him, "I don't really know that much about it," referring to the administration's plan.

Sara Gilbert, executive director of the nonprofit Consumer Credit Counseling Service of Northern Colorado and Southeast Wyoming, says untrained staffers are one of the biggest problems her organization faces. When her employees mention Making Home Affordable, many customer service representatives "don't really know what's available or who qualifies or that they're even providing it," she says.

According to Christina McGrath, a former Countrywide customer, Bank of America representatives told her as recently as mid-May that they weren't offering the administration's plan yet, even though the company signed a participation agreement (PDF) with the government on April 17.

Liya Cornelius of Carmichael, Calif., another Bank of America customer (and former Countrywide customer), says she was also told in early May that the program wasn't available yet. "They told me they'd put me in the system and get back to me in 90 days," she says. "Don't call us; we'll call you."

Amos, the Colorado housing counselor, says that some companies have proven to be more difficult than others. In general, though, industry cooperation is increasing as the plan progresses. In its early stages, "lenders didn't know which end was up, and they were inundated and were not prepared and were resisting every bit of the way," she says. "Now, they have resigned themselves to the fact that they need to do this."

Dealing with the sheer volume of loans will still take some time, however. There should have been a system in place at the servicing companies before the government announced this program, Amos suggests. "It was a cart-before-the-horse type of thing."

A Treasury Department spokeswoman says that it is working on ways to help servicers reach more borrowers faster.

ProPublica will continue to follow homeowners' efforts to obtain Making Home Affordable loan modifications. If you plan to apply for one, or already have, please tell us your story.

Karen Weise and Ben Protess contributed reporting to this report.