The Houston Police Department has ended its longstanding practice of using $2 chemical kits to make drugs arrests, a policy that had contributed to hundreds of wrongful convictions in recent years.

In announcing the change, Houston Police Chief Art Acevedo said the department was abandoning the use of the kits, known formally as chemical field tests, because conducting the tests in the field had exposed officers to the dangers posed by potentially lethal drugs such as fentanyl. He did not address the recent scandal that had shown the unreliable tests to have often been the only evidence used to gain guilty pleas from innocent defendants. 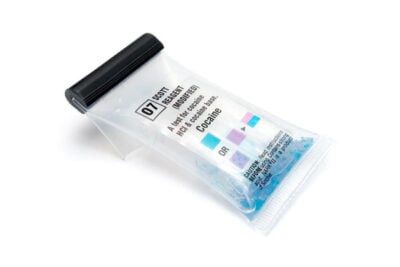 The hundreds of wrongful convictions, reported on by ProPublica and the New York Times last July, had moved then-Harris County District Attorney Devon Anderson to require that any positive field test be confirmed in the crime lab before a guilty plea could be won. ProPublica, in a subsequent article on the field tests used to identify fentanyl, had highlighted the threat to police officers.

The Drug Enforcement Administration last year warned local police that fentanyl, a synthetic opioid sold on the street, is toxic in tiny doses when breathed in or exposed to skin. In May, a police officer in Ohio collapsed and was hospitalized after merely brushing the drug off his uniform with his bare hand. Acevedo said Houston police recently recovered three kilos of fentanyl.

The field tests have been used by police departments across the country for decades. Officers simply drop a suspicious substance into a pouch of chemicals and use supposedly telltale changes in color to make arrests for cocaine, methamphetamine, marijuana and other illegal drugs. But virtually everyone in the criminal justice system – prosecutor, judges, lab scientists, defense lawyers – has had plenty of reason to know the tests are faulty. Courts in most states, in fact, bar the tests from being used in evidence in a criminal trial, saying the tests do not constitute forensic science.

But as increasing numbers of criminal drug cases are resolved through plea bargains, the tests have become enormously consequential. District attorneys in many jurisdictions allowed prosecutors to use the tests to gain guilty pleas even without confirmation by a lab.

ProPublica’s reporting on the long and troubled use of the tests prompted the district attorney’s office in Portland, Oregon, to alter its practice and require lab confirmation before guilty pleas were entered. A modest review of recent cases in Portland done by the prosecutor’s office resulted in the vacating of five criminal convictions.

In 2016, a panel created by lawmakers in Texas formally termed the field tests too unreliable to trust in criminal cases, and called on crime laboratories across the state to confirm drug evidence in every prosecution.

Without field tests, Acevedo said officers in Houston and across Harris County will instead use their own “expertise” in deciding when to make drug arrests. Officers have “a wealth of training and experience into what narcotics look like, what they feel like in terms of the packaging, the color, the appearance,” he said.

Joe Gamaldi, president of the Houston Police Officers’ Union, said that dropping field tests makes officers’ jobs both safer and easier. Gamaldi acknowledged that making arrests based only on officers’ beliefs about whether substances are illegal drugs does create a risk of wrongful arrests. “There is certainly that fear,” he said.

Former Houston Police Chief Charles A. McClelland had told ProPublica last year that he thought the field tests should be abandoned, saying officers were not chemists and shouldn’t be conducting experiments on the hoods of their patrol cars.

On Friday, McClelland told the Houston Chronicle that the policy change was “a very positive step for the criminal justice process.”

“I don't think any law enforcement agency in America should be doing this anymore," he told the Chronicle.

Alex Bunin, Harris County’s chief public defender, said he had no love for the field tests, calling them erratic and unreliable. But leaving decisions about arrests to an officer’s mere observations, he said, could wind up producing wrongful convictions too, maybe even greater numbers.