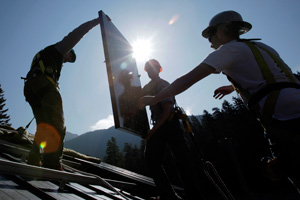 The United States is lagging behind some of its peers in the percentage of economic stimulus money being spent on "green" projects, according to a report released Thursday by the United Nations Environment Program. In all, the U.S. is spending $94 billion, about 12 percent, on programs such as renewable energy, high-speed rail and energy efficiency. But that portion pales in comparison to the 79 percent being spent by South Korea's "Green New Deal" or the 34 percent that China is spending to address climate change. Of the $3.1 trillion in global stimulus, "the amount allocated to renewable energy falls short of the investment needed to reduce carbon emissions and keep the rise in global average temperature under 2 degrees Celsius," or 3.6 degrees Fahrenheit, the U.N. agency said.

Meanwhile, following reports that the stimulus might not be going to the most needy airports, bridges or border checkpoints, USA Today reports that the stimulus has largely bypassed some of the metropolitan areas with the roughest roads. The disparity is a symptom of trying to get the money out fast, as roads in worse shape would take too long to repair, state transportation officials said.

Realtors, home builders and members of Congress are pushing to extend the $8,000 tax credit for first-time homebuyers, which ends Nov. 30, reports The Los Angeles Times. The program could lead to nearly 400,000 new sales. But the popularity also means that the credit will cost taxpayers about $14.7 billion, nearly twice as much as originally expected.