There’s a pandemic spreading across the U.S., and amid ongoing struggles to scale up testing, it’s still unclear how many people are actually infected.

In the absence of real numbers, projections have filled the void, and I’ve been struggling as a reporter to know which forecasts to trust. Last week, the Ohio Department of Health said that over 100,000 people were infected, at a time when there were five confirmed cases in the state. Some epidemiology experts critiqued that estimate as too high, and the department’s director later said she was “guesstimating.”

Should reporters second-guess their health department’s figures? When is it safe for me to retweet? I set out to talk to some experts and learned just how fuzzy those forecasts can be. But there are ways we can think about them that help give us more clarity.

It’s impossible to know how many people are infected right now. Just know that the number is far higher than the running case count.

It’s easier to do big, sweeping projections on a question like how many people will be infected by the time this is all over and done with. Marc Lipsitch, head of the Harvard T.H. Chan School of Public Health’s Center for Communicable Disease Dynamics, has been running projections to figure out how many adults across the world will be infected before a vaccine hits the market (one won’t be available for at least a year) or herd immunity kicks in — when enough people have developed immunity to the virus, from having caught it, so that it can’t easily be transmitted any more. He concluded that between 20% and 60% of adults worldwide will ultimately get infected. (ProPublica has created a tool based on his models and it’s worth checking out.)

It’s much harder to figure out how many Americans are infected at this very moment. Some states have little information because they’ve barely started testing and don’t know when community transmission began in specific places. Many people with symptoms consistent with COVID-19 were turned away from getting tests.

Caitlin Rivers, a computational epidemiologist at Johns Hopkins Center for Health Security, said she’s “not sure we’re in a place where we’re able to estimate that,” though she’s confident that there are far more infected people than the number of reported cases at this time. Computational epidemiologist Maia Majumder said that without widespread testing, this is a “really challenging question to pin down.”

In short, the best way to actually know is with hard evidence — which means testing. As World Health Organization director general Tedros Adhanom Ghebreyesus said on Monday: “You cannot fight a fire blindfolded, and we cannot stop this pandemic if we don’t know who is infected. We have a simple message for all countries: Test, test, test.”

Think in orders of magnitude. The numbers are less precise than they seem.

Of course, computational epidemiologists do have ways of coming up with ballpark estimates. I asked the experts to discuss this sentence with me, from a March 14 post about New York City’s looming crisis by a Facebook data scientist:

That range seems to be both wide yet oddly specific. What is a reader supposed to take away from a sentence like that?

Reporting precise numbers allows epidemiologists to replicate each others’ work; rerunning the same equations and arriving at the same results helps to validate findings. Public health officials also need as much information as possible because it’s helpful for decision-making about preparing hospital beds or closing schools.

My concern, however, is that a sentence like that can give readers a false sense of precision, as if it’s possible to know down to a difference of one or two people. When I asked Rivers what a regular person should take from these counts, she said people should focus on the order of magnitude: “This means there’s a couple of thousand people, it’s not 200 or 4 million. It means we’re in the low thousands.”

“If the forecast doesn’t state its assumptions, I’d be wary,” Majumder said. For example, a popular modeling approach, called the SIR model, assumes that each individual is equally likely to come into contact with any other individual in the population; you don’t have to have a Ph.D. to see how that’s not very realistic.

Majumder also noted that just because someone is good at math doesn’t mean that they’re equipped to do epidemiological forecasting, which comes with its own nuances. “Has the author published epidemiological modeling studies – preferably of other emerging infectious diseases – before in peer-reviewed literature?”

My advice: Check who the numbers are coming from before repeating them.

Don’t get hung up on the specifics. The big picture is clear.

Trying to get clarity on exactly how many people are infected in your city shouldn’t be your goal, if you’re a regular member of the public. Rivers and Majumder agreed on this: There’s no difference in what action you need to take, whether the models say there will be 10,000 or 20,000 infections in your state within a certain number of days or weeks.

There isn’t a single expert I’ve talked to who said case counts won’t continue to soar. There are two reasons for this: As testing becomes more available, cases that already exist will be revealed. Secondly, of course, the virus is continuing to spread. The trends are crystal clear, and the call to action is indisputable. ”If your state has reported community transmission, the message is the same no matter the number of cases: engage in social distancing immediately,” Majumder said. 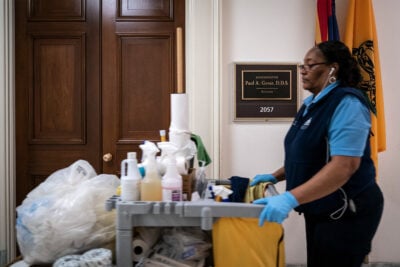 In some ways, the United States is lucky, because the disease arrived here later than it did in China or Italy. We don’t need to rely on computer models to guess what we have to do. We can look to other countries that have been dealing with the virus longer than us.

Rivers points to some countries in Asia that have taken sweeping measures, including closing schools, testing en masse and even publishing the past whereabouts (without names) of people who tested positive, as in South Korea — from the restaurants people visited to the specific seats they sat in at movie theaters.

“They took these interventions really seriously and were really committed in order to avoid a scenario like Italy,” she said. “That’s really what we should be focusing on as a country.”

For reporters, this means two things: Of course, we should continue to ask public officials to explain where they get their numbers from and run them by experts before publication whenever possible. But more crucially, the press needs to hold those in power accountable for their actions — or lack thereof. While it’s forgivable to put out a bad estimate, it’s unforgivable to not act in the face of a pandemic that is not just at our doorstep, but already inside our house.

Each of us has the power to help flatten the curve.

I’m sure by now you’ve already heard about this notion, which comes with its own hashtag. In a nutshell, to avoid a spike of critical cases that will overload our hospitals, we need to implement mitigation strategies to slow down disease transmission.

For the past week, my email inbox has been a sea of panic. A woman in California wrote that she is the full-time caregiver for her elderly mother and is terrified of infecting her. Should she wear gloves at all times, even to touch the mail? Should she never leave the house? A New England retail worker described her fear while ringing people up all day, but said: “I need the money for my bills. I don’t know what to do.” A hospital administrator trying to secure supplies for her facility told me: “I can’t lose my job. I can’t lose my life insurance. If I die, I need my child taken care of.”

On Saturday night, after reading too many of these messages in one go, I cried, knowing there was so little I could do to actually help and feeling overwhelmed by how large the problem felt.

But the next morning, I woke up to Berlin-based reporter Kai Kupferschmidt’s suggestion that we all share “positive or practical things” that we’d seen or done, big or small, “to adapt to this new world we find ourselves in.” For the first time in a while, bright spots illuminated my computer screen. A member of my book club emailed everyone offering to help buy food and supplies. Dr. Esther Choo, an associate professor of emergency medicine, tweeted: “Medical students around the country, taken off clinical rotations due to #COVID, have set up babysitting networks to support essential hospital staff.” All these stories cheered me immensely and encouraged me that I didn’t have to sit back helplessly; I could take small actions myself.

When forecast figures are being thrown around — thousands and hundreds of thousands and millions of people — it can be hard for them to feel real. But when I remind myself that all these fearful and anxious and generous and compassionate people are who we’re all fighting for, it’s a no-brainer as to why I should stay at home, even if I am young and healthy.

The curve will certainly rise for the next few weeks. There will be more fear-inducing headlines that give us reason to doubt the level of preparedness. But know that our individual actions — staying home, enabling health care workers by not hoarding supplies like masks, doing what we can to take care of the most vulnerable in our society — can all help flatten that curve. I hope that our collective efforts mean that it will not rise for too long, and it will not be too steep. In the meantime, take care, and be well.