Updated (Sept. 29, 2014): Sina is censoring Weibo posts about the “Occupy Central” movement in Hong Kong. Weiboscope, a project that monitors censorship on the service, reports that the number of censored posts has increased dramatically.

Every day, more than 100 million items are posted to Sina Weibo, the microblogging service sometimes called “China’s Twitter.” And every day, teams of censors comb through the posts in search of anything that challenges what the government likes to call a “harmonious society.”

How Sina Weibo censors its users is as revealing as the content that appears on the site, and for the past five months, we’ve been watching the watchers. We’ve created an interactive feature, launching today, that allows readers to see and understand the images that censors considered too sensitive for Chinese eyes.

Because the Chinese government blocks popular worldwide services like Twitter and Facebook, Sina Weibo has emerged as an influential player in China’s daily life, with some 500 million users. But while the speech on Weibo is equal parts sophisticated and base, considerate and raucous, it is by no means free.

Sina’s censors appear to be walking a fine line seen frequently in modern China. If they allow users too much freedom, the government will shut them down. But if they block too much material, the users in this quasi-capitalist economy can go to one of the company's competitors.

While there are manyresearchprojects devoted to identifying posts that are deleted on Sina Weibo, considerably less attention has been focused on censored images and the meaning behind them.

For five months, our software has been quietly checking 100 Weibo accounts, keeping track of every post containing an image and returning repeatedly to see if those posts were deleted. Our collection has grown to nearly 80,000 posts, of which at least 4,200 -- more than 5 percent -- were deleted by censors.

We also gathered a team of people proficient in Mandarin to read and interpret 527 deleted images collected during a two-week window this summer. Among the key events that occurred in this period: The indictment of Bo Xilai, a disgraced Chinese political leader; a protest by female police officers; and the arrest of Xu Zhiyong, the co-founder of a pro-democracy movement that is still being suppressed.

Sina Weibo has long been eager to stay in the government’s good graces, even before the Chinese government started arresting some of its most popular users this summer for “spreading rumors.”

Users who post forbidden content frequently, or who have a lot of followers, are singled out for threats and can face arrest. One user, whose name is being withheld by ProPublica because of the risk of reprisals against him by the Chinese government, posted on Sina Weibo, accusing a local government official of wrongdoing. Soon after, he received a direct message.

“The message said that they knew everything about me and about my family,” the user said. “That I couldn’t see them, but they could see me, and if I knew what was good for me, I’d delete that post because they will always be watching me.”

The user complied, noting “I had to protect my safety.” Since then, he’s never posted a message naming a specific government official.

By many accounts, the censorship apparatus deployed by Chinese companies is the most sophisticated in the world. Attempts to post a message containing words on the continually updated list of forbidden words on Weibo, such as “坦克” -- meaning “tank” -- are rejected by the service before the message can even reach a user’s followers. 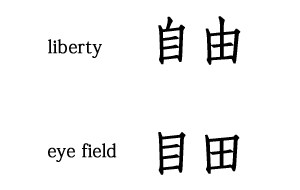 Weibo users often use typographic tricks to beat out censoring technology. A nonsensical phrase such as “eye field” looks similar in Chinese to the characters meaning “liberty.”

“The Chinese language offers novel evasions, such as substituting characters for those banned with others that have unrelated meanings but sound alike or look similar,” Gary King, a political scientist, said in his 2013 study on Chinese censorship. For example, a nonsensical phrase such as “eye field” looks similar in Chinese to the characters meaning “liberty.”

A political image manipulation can transform innocuous phrases such as “giant yellow duck” into a commonly understood metaphor for the tanks at Tiananmen Square.

“Chinese Internet users have mastered the use of irony as protest,” Jason Ng wrote in his book Blocked on Weibo. “Emphatically pro-government comments online such as ‘Socialism is good’ and ‘I have been represented by my local official’ are often meant to be satirical.”

This is where human censors come in. The company employs hundreds of people to delete posts that have slipped past the filters. Forbidden messages don’t live long after being posted. Researchers have found that nearly 30 percent are gone within 5-30 minutes and 90 percent are gone within 24 hours. The censors take an especially dim view of posts that go viral or promote any type of collective action.

An increasingly sophisticated competition of sorts has arisen, pitting cutting-edge digital censors and clever human ones against users who deploy countermeasures such as typographic tricks and arcane metaphors.

One of these countermeasures takes advantage of the fact that computers aren’t very good at understanding photographs and other images. Weibo messages with innocuous text but taboo political imagery -- the 1989 protests in Tiananmen Square, for example, or photos of disgraced politicians -- pass by the automated algorithms unnoticed, only to be deleted later by the human censors.

We’ve published the deleted images themselves, as well as a translation of some of the text users posted with them. We’ve also tried to convey the meaning behind each picture, explaining Chinese cultural references, identifying public figures and deciphering subtle political points.

In tracking images censored from our sample of 100 Weibo accounts, we found that they fell into roughly 10 conceptual categories representing a wide sample of “unharmonious” culture. They provide a window into the Chinese elite’s self-image and its fears, as well as a lens through which to understand China’s vast system of censorship.

We contacted Sina for a response to our story, but they did not respond to us in time for publication.

Some of the research for this investigation was conducted in collaboration with a team at the Spatial Information Design Lab and the Brown Institute for Media Innovation, at Columbia University. The Columbia project, called “Jumping the Great Firewall,” uses a similar methodology and was pursued in partnership with the Pen American Center and Thomson Reuters.

If you work as a Weibo censor and are willing to speak to ProPublica about your experiences, please contact us at [email protected]. Here’s our PGP key.