In 2016, senior officials from the U.S. Department of Housing and Urban Development drafted recommendations to fix the agency’s broken inspection system for publicly subsidized housing after a series of scandals revealed deplorable living conditions across the country. Chief among them was a proposal to revise the agency’s much-maligned scoring system to put a greater emphasis on health and safety concerns facing tenants inside their units, such as severe infestation, mold and peeling paint that could contain lead.

More than two years later, HUD has yet to take that step.

Instead, late last month, HUD announced plans to reduce the advance notice that is provided to property managers about pending inspections from up to four months to a maximum of 21 days. In a statement, HUD Secretary Ben Carson said reducing the notice time of a pending inspection would prevent landlords from “gaming the system.” HUD also said it would hold “listening sessions” on other proposed improvements.

And on Monday, in his proposed fiscal year 2020 budget, President Donald Trump proposed deep cuts to HUD, including eliminating a fund that helps pay for major repairs at aging public housing complexes and asking people living in poverty to contribute more toward rent in federally subsidized apartments.

Tenants and advocates were unimpressed by Carson’s plan to improve HUD’s oversight of properties, particularly as the administration has proposed cutting funding to programs that would improve living conditions.

Michael Kane, director of the National Alliance of HUD Tenants, a tenant-led organization that represents renters of privately owned, federally subsidized apartment complexes, said the announced change may do some good, but doesn’t get to the heart of the system’s flaws.

“It doesn’t solve any of the more structural problems of the scoring system,” he said. “And it doesn’t address our recommendations for consulting with tenants and involving tenants in the process by asking them what’s really going on at their apartment complexes.”

Last year, The Southern Illinoisan and ProPublica examined how deep flaws in HUD’s inspection system resulted in dangerous properties receiving passing grades, which can leave vulnerable families trapped in unsafe conditions, sometimes for years. The news organizations also examined how the 20-year-old inspection system, coupled with federal funding shortfalls for subsidized housing, has led to a culture of score chasing and cosmetic fixes that may result in passing grades while neglecting the most serious health risks facing families.

Nationwide, about 30,000 federally funded properties are subject to HUD inspections, with poorer performing properties inspected more often. These properties are owned either by local housing authorities or by private or nonprofit entities that enter into contracts with HUD to provide subsidized housing to about 2 million American families.

In October, Carson announced via Twitter that he had directed a “wholesale reexamination” of how the department conducts inspections shortly after he took office in March 2017. HUD had not mentioned anything about it in the intervening year and a half, including when The Southern began asking HUD about problems with its inspection system in October 2017, a year earlier, because of oversight failures in Cairo, Illinois’ southernmost city.

NBC News also published its own investigation a short time after Carson’s October tweet. HUD repeatedly declined to provide details as to how Carson’s reexamination differed from the 2016 effort that took place in the final year of the Obama administration.

Over the last three years, HUD has quietly implemented some recommendations of the 2016 task force, including telling inspectors to issue deficiencies when they find shoddy repairs, and clarifying in a notice last October that property owners must maintain their properties in accordance with local codes. 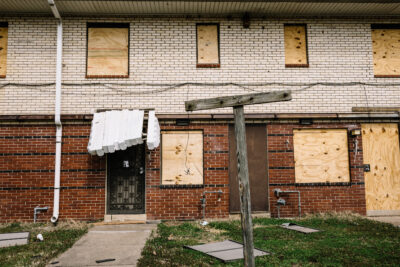 That latter change came more than a year after tenants in Hartford, Connecticut, organized to take on their absentee landlord and HUD because of the rampant mice and mold infestations in their homes.

Their apartment complex never failed a HUD inspection, but the city of Hartford had cited it for dozens of code violations. Though HUD inspectors had cited the property for mice, mold and other problems, it passed by performing well on assessments of its grounds and building systems. HUD eventually ended the landlord’s contract last May. Since then, HUD has pulled contracts from two other private owners in Hartford’s North End. Those buildings also had recently passed HUD inspections.

Cori Mackey, the leader of a Hartford-based neighborhood advocacy organization that helped the residents organize, said the change reducing advanced notice before inspections is not “getting at the root of the problem at all.”

Mackey said the biggest issue she sees is not the notice landlords have of a coming inspection but rather a scoring system that favors them. Currently, while landlords can receive up to 120 days’ notice, many receive just a few weeks’ heads-up.

Property owners and HUD inspectors, most of whom are contractors, also said changes to the advance notice present logistical challenges the agency isn’t prepared to address.

“That’s impossible,” said Kay McIlmoil, a HUD inspector based in Virginia. As a full-time inspector, McIlmoil said she’s typically booked at least three months out. She conducts inspections up to six hours away from her home and plans multiple inspections for one trip.

Under the new directive, inspectors are required to call exactly 14 days out to tell a property owner the date they are coming for an inspection. But then the property owner can request an extension of up to seven days. McIlmoil said that would throw her schedule into chaos if she had to return the following week. More inspectors will drop out, she said. Inspector recruitment and retention has already proven to be an issue for HUD.

In recent years, HUD fell significantly behind in inspecting properties. The agency blamed delays on technical problems and a shortage of contract inspectors. For many inspections, certified inspectors bid for jobs in a reverse auction, with the job going to the lowest bidder.

Between January and April 2018, the agency did not receive bids for more than 100 of the 640 public housing property inspections, or roughly 16 percent, according to a 2018 report to Congress.

HUD also was unable to bid out inspections for about 40 of 1,500 privately owned, federally subsidized properties. Of those, more than half were for inspections of properties in Montana, “where inspector recruitment and retention has proved difficult,” the report stated.

“I hate to say it, but is Mr. Carson able to change his schedule with a two-week notice?” Spiller said. HUD repeatedly declined to answer follow-up questions about how the scheduling would work under the new plan, or to make anyone available for an interview.

According to attendees of the first “listening session” in Philadelphia, senior officials acknowledged that it does present a challenge, but said they are moving forward with the change regardless.

At the same listening session, HUD said it plans to test out dramatic changes to its scoring system with a two-year pilot in a handful of states, according to a PowerPoint presentation. Nationwide implementation isn’t expected until at least 2021.