Two years ago, officials from the Illinois Department of Children and Family Services vowed to rescue the children they called “stuck kids” — those in state care who had languished in psychiatric hospitals for weeks and sometimes months after doctors had cleared them for release because the agency could not find them proper homes.

But children continue to be held at psychiatric hospitals long after they are ready for discharge, a practice our reporting showed leaves them feeling isolated and alone, falling behind in school and at risk of being sexually and physically abused during prolonged hospitalization.

Cook County Public Guardian Charles Golbert, who filed a federal lawsuit against the department and key current and former directors and employees in December 2018 following the ProPublica Illinois investigation, said it was distressing that DCFS had not remedied the problem, even if the pandemic has complicated the agency’s work.

The number of psychiatric admissions that went beyond medical necessity first spiked in 2015, going from 88 the year before to 246. It continued to climb, reaching 301 in 2017, according to DCFS data obtained by ProPublica Illinois through a Freedom of Information Act request.

For the most recent complete fiscal year, from July 2019 to June 2020, 314 children remained hospitalized after doctors had cleared them for release, according to data Golbert said he received from DCFS. The youngest, he said, was a 3-year-old girl.

During that year, those children spent an average of at least 50 days unnecessarily hospitalized at a cost of $6.3 million to taxpayers, he said. DCFS could not immediately provide the data to ProPublica Illinois.

“There’s not a whole lot that tells a kid you don’t matter [more] than keeping a kid locked up in a psychiatric ward for no reason whatsoever other than there’s nowhere to place them for months on end,” Golbert said.

He called the hospitalizations “illegal” and “inhumane.” The lawsuit is pending. DCFS has argued in court that the children in the lawsuit are covered by a federal consent decree.

Since July, DCFS said it has moved 61 children who were hospitalized after they were medically cleared for release into placements; 34 children are still waiting.

A DCFS spokesman placed blame for the problem on a variety of factors, including the loss of hundreds of residential treatment beds and more than 2,000 foster homes in recent years. But as those placements were cut, officials did not replace them with therapeutic or specialized foster homes as they had promised. Such homes offer support beyond traditional foster homes for families caring for children with intense mental health needs.

In addition, some children become the state’s responsibility after their families, often desperate to get them the mental health services they cannot afford or provide, leave them at a psychiatric hospital instead of bringing them home when they are ready for release. Some children have complicated medical and mental health issues, making it more difficult for DCFS to find a placement for them.

“These longstanding challenges will not be overcome overnight, but we will continue to rebuild and expand this network to ensure our first priority, which is serving every child in this state who needs our help,” the spokesman, Bill McCaffrey, said in a statement.

Smith wants to “establish a system of care to rebuild the network of living environments for young people ready to leave psychiatric hospitals,” McCaffrey said. He added that “DCFS is committed to aggressively addressing the decades-long challenge of a lack of community resources and facilities for children with complex behavioral health needs.”

To help alleviate the problem, DCFS has contracted with a number of local nonprofits to provide various services for these children. Those efforts, however, so far have reached only a relatively small number and the overall number of children held beyond medical necessity continues to rise. 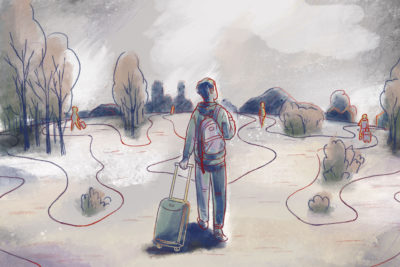 In 2017, Chicago-based Kaleidoscope began a small pilot project to provide at-home support services for families of children hospitalized after they were medically cleared to leave. That program has served 86 children, according to the organization.

There are currently about 40 children in the program, but plans to expand have faltered because of DCFS turnover, trouble recruiting and retaining staff, as well as the coronavirus pandemic, said Kathy Grzelak, Kaleidoscope’s executive director. She said she wasn’t surprised the number of children hospitalized beyond medical necessity hadn’t gone down in the last two years.

“It’s been a fragmented system with lots of changes in DCFS leadership, lots of changes that steer the ship in different directions,” she said. “Even though people want to do the right thing, their hands get tied sometimes, and it just slows the process down.”

Lawrence Hall, a residential center on Chicago’s North Side, also started a small program last year to address the hospitalization issue. It has served nine children, who have stayed an average of three to six months, though some have stayed much longer, said Kara Teeple, Lawrence Hall CEO.

She said the stubbornly high number of children who remain at psychiatric hospitals is both a reflection of their mental health needs and the lack of services that could prevent hospitalization.

Aunt Martha’s Integrated Care Center, which opened last year in the Bronzeville neighborhood on Chicago’s South Side, is providing placements designed to bridge the gap between a child coming out of a hospital and going into a home, said Aunt Martha’s president and CEO, Raul Garza. Of the 340 children who have gone through the center since it opened, about 40% came from a psychiatric hospital, with 10% or so of those children held beyond their release dates, Garza said. Many come in from residential treatment centers or had run away from their placements, he said.

“They have to have somewhere to go coming out of the hospital,” Garza said. “What’s the alternative? The alternative is that they would sit in a hospital beyond medical necessity.”

But Golbert, the public guardian, said DCFS needs to focus its efforts on creating long-term solutions to the issue by investing in specialized and therapeutic foster homes. While the agency has spent the last six months months dealing with COVID-19, he said the problem long precedes the pandemic.

“They had a year and a half before COVID. They need to start diving back into the reform efforts that have been put on hold,” he said. “These are real children we’re talking about.”