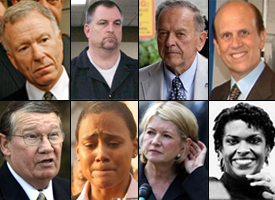 Attention, convicts: Time is running out to get applications into the pardon attorney at the Justice Department if you're hoping that President Bush will be your decider. Few of you should get your hopes up -- Bush has rejected a record number of requests for pardons and commutations. In the last eight years, he has pardoned 157 people -- a miserly sum compared to his predecessors. But you don't have to give up entirely: More are expected in the coming months, most notably for Vice President Cheney's former chief of staff, I. Lewis "Scooter" Libby.

Before President Clinton went on a pardon spree for wealthy friends and campaign contributors at the end of his presidency, pardons and commutations were traditionally bestowed on average citizens who had successfully reformed their lives and given back to their communities after completing lengthy sentences. Pardon experts believe that of the Bush prospects, the 1980s junk-bond king Michael Milken best fits the rich-and-famous description.

Most of the other top prospects for pardon listed below have, like Milken, been convicted and served prison time. But not all. People who are merely charged could be eligible for pardons, as Bush's father demonstrated when he pardoned former Defense Secretary Casper Weinberger. And Washington is abuzz with the prospect that Bush might issue pre-emptive pardons for government employees who could face trouble in the future stemming from their roles in his "war on terror."

The disgraced Olympic gold medalist returned five awards after she was sentenced to six months in jail in January for lying to federal agents about using steroids. She was released on Sept. 5. Jonesâ offense is considered mild, and her sentence was brief, but the president may not want to reward someone who cost the United States Olympic Gold.

The Atlanta Falcons' suspended quarterback is serving a 23-month sentence in Leavenworth, Kan., for criminal conspiracy relating to dog fighting. Yuck. There just isn't much of a pro dog-fighting lobby to pull for Vick.

The former San Francisco Giants superstar who holds the MLB all-time record for home runs was indicted in November 2007 for lying about his involvement in a steroids scandal. Bonds became a free agent last year but has been unable to find a team willing to sign him while under indictment. As a former baseball team owner, Bush may be sympathetic to Bonds. But let's be honest -- who in baseball likes Barry?

As governor, Bush appointed Griffin to the oversight board of the Texas Department of Housing and Community Affairs. In 2000, she was convicted of bribery, theft and money laundering. In 2003, a federal appeals court overturned a separate conviction for mail fraud. Griffin has two things going for her: Bush and Texas. Bush has pardoned more of his fellow Texans than residents of any other state.

Ignacio Ramos and Jose Compean, pictured with his wife, are serving sentences of 11 and 12 years, respectively, for the nonfatal shooting in the back of an unarmed Mexican drug runner in February 2005. A jury found the two border patrolmen then tried to cover up the shooting. Their requests for a pardon have won support from numerous Republican congressmen including Rep. Duncan Hunter of California, who introduced the Congressional Pardon for Border Patrol Agents Ramos and Compean Act. Bush left open the possibility of a pardon for both men during an interview with a Texas TV station.

Cheneyâs former chief of staff, who also served as assistant to the president, was convicted of perjury and obstructing the FBI's investigation of the leak of former CIA officer Valerie Plame's identity. In June of 2007 he was sentenced to 30 months in federal prison and ordered to pay a hefty fine. Bush commuted the prison time, but only a pardon will allow Libby to practice law again.

Tobin was Bush's 2004 New England campaign chairman and raised more than $200,000 for the president's re-election bid. He was indicted in October for making false statements to the FBI in connection with the bureau's investigation of the plot to jam Democratic Party phones in New Hampshire in 2002. Tobin was convicted in 2005 for his actual role in that scheme, but that conviction was overturned on appeal in 2007. His fundraising prowess and the overturning of his earlier conviction -- in connection with the same case -- make him a good pardon candidate.

Noe was a prominent Ohio Republican fundraiser for Bush-Cheney '04. He was sentenced to 27 months in a federal prison for illegally funneling money to the campaign. Two months later, he was also found guilty of theft, money laundering, forgery and corrupt activity related to Ohio's rare-coin investment scandal. Noe may have had a shot if his only offense were connected to campaign funding. But his Ohio crime was one of a number of nasty Republican scandals that badly damaged the party's standing in the 2006 midterm election.

Now that the 85-year-old Alaska Republican, who was found guilty last month of corruption, has lost re-election, members of his party might push for a pardon for him -- after all, he spent the last 40 years in the Senate. Stevens seemed to dismiss the need for a pardon while the votes were being counted; late Tuesday, he was tight-lipped about the whether he would ask Bush for clemency.

The former Republican congressman from Ohio was sentenced to two and a half years in prison after he acknowledged taking bribes from convicted lobbyist Jack Abramoff. Ney was on the Abramoff-sponsored golfing trip to Scotland at the heart of the case against David Safavian, the former White House procurement officer who was also caught up in the scandal. A pardon of Ney could refocus public attention on cushy relationships between Republicans and lobbyists over the last eight years -- relationships that a humbled GOP would rather forget.

The former Republican congressman from California pleaded guilty in 2005 to federal conspiracy charges to commit bribery, mail fraud, wire fraud and tax evasion. He was sentenced to eight years and four months in prison and ordered to pay $1.8 million in restitution for all the fancy gifts he racked up from lobbyists. "The Duke" has a pardon attorney, and a number of people have written to the Justice Department in support of clemency. But Cunningham's naked abuse of power tainted Republican rule and contributed to steep party losses in 2006.

Wilkes, a defense contractor, was sentenced to 12 years in prison in February for furnishing Cunningham with yachts, vacations and other luxury items in exchange for lucrative contracts. Wilkes cooperated with federal investigators in the Cunningham case, and that could help him win a pardon.

Foggo was Wilkes' childhood friend before he rose to become executive director of the CIA, the No. 3 position in the U.S. spy agency. He was indicted in 2007 on several counts of fraud, conspiracy and money laundering in connection with Wilkes and admitted to steering a lucrative CIA contract to his pal. Foggo remains under investigation by the CIA and other federal agencies. But his cooperation with investigators and years of service in the clandestine agency once run by Bush's father could make him a good candidate for clemency.

The former Hollywood producer-turned-Republican lobbyist was at the center of the largest lobbying scandal in Washington, which erupted in 2005. Abramoff was convicted of fraud, tax evasion and conspiracy to bribe public officials. The sentence was reduced in September to four years in recognition of Abramoff's cooperation with investigators. That's all the break he'll get. Abramoff was such a disaster for Bush and the GOP that the White House refused to release any photos in which the president and Abramoff appeared in the same room at the same time.

Griles served as Deputy Secretary of the Interior during Bush's first term. In March 2007, he pleaded guilty to obstruction of justice charges in connection with his 2005 Senate testimony regarding the Abramoff scandal. Griles was sentenced to 10 months in prison and fined $30,000. He was released this year. Griles' time served, combined with his senior position in the administration, make him a good candidate for a pardon.

The senior White House procurement officer in the Office of Management and Budget was convicted in 2006 for concealment, making false statements and obstructing justice in the Abramoff investigation. He was sentenced to 18 months in prison, but the conviction was overturned in June. A retrial is set for December.

The junk-bond king became the symbol of the '80s greed on Wall Street that led to insider-trading scandals and a stock-market crash. Milken was sentenced to eight years for conspiracy and fraud charges and ordered to pay $200 million in fines. But he was released in January 1993, after less than two years in prison. Milken, who was diagnosed with prostate cancer that year, has since devoted significant resources to philanthropy and created several foundations to support cancer research. Milken, who is believed to be worth more than $1 billion, tried unsuccessfully to secure a pardon from President Clinton. He is currently represented by Washington powerhouse attorney Ted Olsen, Bush's longtime friend and first-term solicitor general. Olsen also represented Armand Hammer, who received a pardon from former President George H.W. Bush.

The Smartest Guys in the Room

Former Enron executives Jeffrey Skilling, right, and Andrew Fastow, left, were convicted of multiple federal felonies in 2006 in connection to Enron's downfall. Skilling, who was Enron's CEO, is serving a 24-year-prison sentence at a federal penitentiary in Minnesota. Fastow, the corporate CFO, is nearing the end of his six-year sentence. Bush was friends with the now-deceased chairman, Kenneth Lay of Enron, which, of course was based in Texas. But the president managed to distance himself from the company's extraordinary collapse. A point against pardons for these guys: Considering the current financial crisis, rewarding Enron's failed leadership might not be smart.

Millions of glue-gun aficionados would love to see a pardon for the domestic doyenne who was convicted in 2004 of lying to investigators about a stock sale and served five months in a womenâs correctional facility. Thousands of people have even signed a petition seeking a pardon for Martha. It's hard to see what would be in it for Bush. But Martha's spectacular book sales and daytime-TV ratings are testament to millions of other Americans' ability to forgive. Why not the president, too? (The question, of course, that all pardon applicants ask.)

Correction, Nov. 20, 2008: This post originally stated that Sen. Ted Stevens has served in the Senate for 50 years. He has served for 40 years.