This is a collaboration between ProPublica Illinois and the Chicago Tribune

A 16-year-old boy in Kalamazoo, Michigan, died this spring after workers pinned him to the floor at the residential facility where he lived — after he’d thrown a sandwich at lunch. While held on the ground, he told them: “I can’t breathe.”

At least 70 people have died in law enforcement custody in the last decade after saying the words “I can’t breathe,” a recent New York Times investigation found. But just as adults have died after being restrained, so have children.

And though we encountered no fatalities, we also repeatedly saw those words among the 50,000 pages of school incident reports on restraint and seclusion that we reviewed for The Quiet Rooms investigation, published last year. School workers documented they had restrained a child in a face-down, or prone, position and the student pleaded to be let up, saying he or she couldn’t breathe.

The scenarios were similar to the Kalamazoo case, where video released this week shows Cornelius Fredericks was restrained in the cafeteria at Lakeside Academy for about 20 minutes as school workers held down his arms and legs and sat on top of his chest and abdomen.

“I can’t breathe,” he told the employees who held him down, according to a lawsuit filed on behalf of his estate. An autopsy found he died of asphyxia, and three employees were charged with manslaughter and child abuse in his death. They’ve said publicly that they were following the facility’s protocols.

Sequel Youth & Family Services, which operates the for-profit facility, has said that the workers did not follow policy and that restraint is to be used only in an emergency.

Fredericks died May 1, less than a month before the death of George Floyd, a Black man who was held face down in the street as a white Minneapolis police officer kneeled on his neck. He died struggling to tell the officers that he couldn’t breathe. Transcripts of Minneapolis police body camera footage, made public this week, revealed that Floyd said “I can’t breathe” more than 20 times.

The Quiet Rooms investigation, published by the Chicago Tribune and ProPublica Illinois, found that in 100 public school districts, children were physically restrained more than 15,000 times between August 2017 and December 2018.

School employees often took detailed notes on these incidents; they wrote down that students said “I can’t breathe” while being restrained at least 30 times over the time period we investigated, according to our analysis of the records. It likely happened more often than that, as we didn’t track every incident in which it was noted that students had trouble breathing. 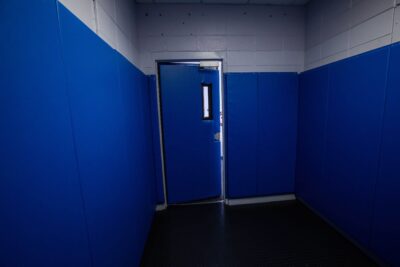 We found that in about 1,800 of the restraint incidents we logged, school workers used face-down restraints, which at least 31 other states have banned at schools.

During prone restraints, school workers perform a “takedown” to force students to the ground and hold them at their arms, legs and hips. School employees learn the technique in training sessions; some behavior-management companies offer training to law-enforcement agencies as well. They typically make clear that restraints can be dangerous and shouldn’t be performed when staff members are angry or if there’s no emergency.

Here are three of the more than two dozen instances we found where Illinois children told the school workers restraining them that they couldn’t breathe:

Records from workers at the A.E.R.O. special education cooperative in Burbank don’t explain why a boy’s lunch time with other students was taken away, just that he was punished with “an academic lunch.” He began to “thrash about his desk,” school workers wrote in an incident report, so other employees were called to take him to seclusion.

When he refused to walk to the seclusion room and tried to pull away, workers initially restrained him in a seated position. When he tried to head-butt them, they moved him onto his stomach and restrained him face-down.

The employees noted the prone restraint lasted for seven minutes and that the boy had a nosebleed.

At the Southwest Cook County Cooperative for Special Education in Oak Forest in August 2018, a boy who refused to finish his classwork and kept repeating “I want to die” was sent to a seclusion room.

He tried to get out of the padded room by throwing himself against the door. Workers then restrained him because he did not “get his body under control,” according to the incident records.

“Oh my God, I can’t breathe, ow. God, I swear to God you broke my right arm,” school employees recorded him saying.

During a group session at A.E.R.O., a boy used “inappropriate language.” School workers told him repeatedly to stop, but he didn’t. Instead, he asked if he could use the computer and was told no as punishment for his “misuse of language.”

He tried to run from his classroom, but employees caught up with him and called for help to hold him. When they began to walk him to a seclusion room, he “resisted,” employees wrote in an incident report, so they physically restrained him while sitting and then turned him onto his belly. They held him there for 20 minutes even as he said “I can’t breathe.” The workers told him “to breathe through his nose.” He kept struggling and said “I want my mom, please.”

There was no detail in those three incidents to indicate that students were seriously injured.

About two dozen of the 100 districts we examined used prone restraint. In Illinois, prone restraint will be legal in public and private schools for at least another year.

Kyle Hillman, a Chicago-based legislative affairs director with the National Association of Social Workers who has spoken out against school seclusion and restraint, tweeted this recently in response to Fredericks’ death and Illinois’ continued use of prone restraint:

Despite saying last year that she was “taken aback” to learn the extent that schools were using prone restraint, state schools Superintendent Carmen Ayala’s administration ultimately allowed it for the upcoming year under pressure from some schools that rely on it. An Illinois State Board of Education spokeswoman has said the agency would like to see the practice banned.

Illinois lawmakers have vowed to vote this fall on legislation proposing a ban. Disability advocates say the discussion has taken on greater urgency with the deaths of Fredericks and Floyd — and their cries of “I can’t breathe.”