When undocumented immigrants who arrived in the U.S. as minors applied for deportation protections and work permits, the forms included a promise: The information would not be shared with immigration enforcement agents.

The pledge was first made by the Obama administration, when it created the Deferred Action for Childhood Arrivals program, or DACA, eight years ago. It continued under President Donald Trump. Even after Trump announced that he was ending DACA, his administration assured immigrants that the information on their applications generally wouldn’t be sent to Immigration and Customs Enforcement agents.

But internal administration emails obtained under a Freedom of Information Act lawsuit filed by Make the Road New York, and shared with ProPublica, show that those assurances — given to Congress under oath and in lawsuits over the program — were incomplete or misleading.

The Trump administration left out the fact that immigration enforcement agencies already had access to databases containing detailed information, such as home addresses, about DACA recipients and millions of other immigrants.

“ICE already has the information,” Gene Hamilton, an appointee at the Department of Homeland Security, wrote in an internal email shortly before Trump’s announcement in September 2017. (Hamilton is now at the Department of Justice.) “There is no way to take that back.”

Two weeks later, the communications show, the agency decided to leave that fact out of congressional testimony.

Staff had prepared talking points for a question they expected to be asked at an upcoming Senate Judiciary Committee hearing: “Please explain how and when the personal information provided by DACA applicants is provided to ICE.”

A draft response included the sentence: “DHS personnel have mutual access to some of the electronic systems used by USCIS,” or U.S. Citizenship and Immigration Services, the agency that runs DACA. But the sentence was removed by an agency lawyer. It was “not essential to responding to the specific question asked,” the lawyer wrote, “and is likely to generate considerable anxiety among DACA requestors.”

The fate of DACA currently rests with the Supreme Court, which heard arguments last November over Trump’s effort to end the program and is expected to issue a ruling in the coming weeks. In the meantime, as many as 690,000 immigrants remain protected from deportation under the program.

The internal emails make clear that an immigrant targeted by ICE could easily be located based on what they told the government when applying for protection.

In response to questions, USCIS issued a statement: “The information-sharing policy governing DACA information remains unchanged since it was first announced under the previous administration.” The administration has made similar statements in federal court cases and to Congress.

The Obama administration banned the use of DACA recipients’ information for enforcement purposes. The Trump administration has said that USCIS will generally not proactively share information for enforcement purposes — but it has not said what ICE agents can do with the databases they already have access to. Any safeguards are also subject to change without notice.

ICE declined to comment on its use of DACA data.

“Eight years ago, the federal government made a commitment to young immigrants who grew up in this country: come forward and register with the government, pay a fee, and pass criminal and national security background checks, and we will not use this information to deport you or your family,” Sen. Dick Durbin, D-Ill., told ProPublica. “It is shameful that the Trump Administration is so committed to deporting these Dreamers that it is prepared to break this promise.”

On Friday, Durbin sent a letter to Acting Homeland Security Secretary Chad Wolf demanding answers to several questions about when deportation agents can access the information provided by DACA recipients.

While current administration officials say former DACA recipients won’t be prioritized for deportation, immigrants and advocates remain concerned. Even before Trump moved to end DACA, the administration was stripping individual immigrants’ protections by opening deportation cases against them — but a February 2018 court ruling made that more difficult.

The DACA application form, which is still used for renewals of two-year protections and work permits, says that information is “protected from disclosure to ICE and U.S. Customs and Border Protection (CBP) for the purpose of immigration enforcement proceedings.”

ICE designates certain supervisors to use these immigration databases for information their offices might need, according to current and former officials. Government reports show the information can include home addresses, immigration history, parents’ names and other details.

An internal email obtained in Make the Road’s FOIA suit, sent Sept. 20, 2017, shows screens from several databases — including ones accessed by ICE — displaying information about DACA recipients, including when their work permits are set to expire.

Officials told ProPublica that most users, including enforcement agents, can’t conduct broad searches of the immigration databases to pull up long lists of people. The system also keeps a log of every time personal information is viewed, and the agency that owns the database can audit those logs to detect misbehavior. But former officials suggested to ProPublica that audits are infrequent. 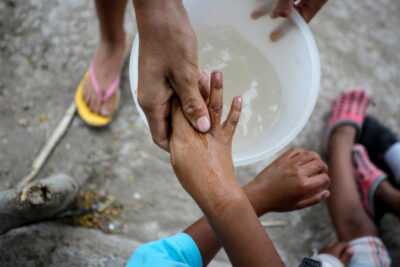 Citing little-known power given to the CDC to ban entry of people who might spread disease and ignoring the Refugee Act of 1980, an internal memo has ordered Border Patrol agents to push the overwhelming majority of migrants back into Mexico.

Users get a warning they’re about to see legally sensitive information in cases where immigration law requires extra privacy protections. But DACA isn’t covered by the law, and privacy disclosures don’t mention any warning system for DACA information.

Current and former immigration officials stress that it would be incredibly difficult for ICE to identify and round up large numbers of DACA recipients just because their protections have expired. When the Trump administration has geared up for large nationwide sweeps before, it’s had to use a lot of resources — and the last one caught few immigrants. (ICE told Congress in mid-March that because of the coronavirus pandemic, it was temporarily scaling back its arrests of immigrants.)

What’s more likely is that ICE would target immigrants for other reasons, and it would be able to apprehend them (or their family members) based on information provided in their DACA applications.

In January, the head of ICE told reporters that if the Supreme Court ended DACA, the agency would be able to go after DACA recipients who had previous deportation orders.

Immigrants with existing deportation orders are generally considered “low-hanging fruit,” said former Acting ICE Director John Sandweg, because they can be deported without an immigration court hearing. While the exact number of DACA recipients with previous deportation orders isn’t publicly known, advocates and former officials estimate it’s in the tens of thousands.

Do you have information about the U.S. immigration system that we should know about? Email [email protected] (Signal number provided on request). Here’s how to send tips and documents to ProPublica securely.