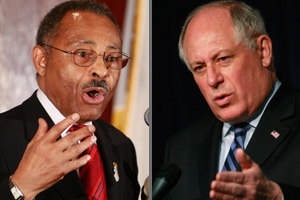 Just when Roland Burris' new gig in the U.S. Senate was starting to look safe, Illinois lawmakers devised a plan Thursday to boot him from office.

Illinois Gov. Pat Quinn (you know, the one who replaced Rod Blagojevich) called on state legislators to approve a special election for the Senate seat if Burris doesn't resign in the next two weeks.

Quinn's plan faces an uncertain future, as it could meet Democratic opposition in the state legislature.

Quinn, it seems, had sought to avoid escalating the Burris controversy to this point. At first, he tried to reason with his fellow Democrat, calling on him to resign. Illinois' senior Sen. Dick Durbin this week joined Quinn in arguing that Burris no longer can effectively do his job because he failed to fully disclose his contacts with allies of Blagojevich, who appointed Burris to the Senate.

On Thursday, Quinn reiterated his hope that Burris call it quits after 30 years in state politics. "I think the optimal course is if the senator, upon reflection, talking to his family and friends, especially the people of Illinois, comes to realize that being U.S. senator at this time is not an avenue of service for Roland Burris," Quinn said.

Don't count on it. Burris, who has repeatedly said he does not intend to resign, is known for sticking to his guns, even when it's wildly unpopular. And even if there were to be a special election, Burris could run in it.

Scrutiny of Burris, meanwhile, is intensifying. Quinn's call for the special election came on the same day that the Chicago Sun-Timesrevealed that Burris' son received a $75,000-a-year state job under Blagojevich five months ago. Roland Burris II was hired on Sept. 10 to work for a state housing agency, despite facing a foreclosure lawsuit on his Chicago house and a $34,163 federal tax lien against the property. (Both Burris children bear their father's name: II's sister is named Rolanda.)

The Illinois Housing Development Authority said in a statement Thursday that Burris II is an experienced lawyer hired as senior counsel after he applied in response to a Web site job posting.

The revelation is one more bit of evidence demonstrating the long-standing ties between Burris and Blagojevich and might raise further questions about hiring practices under the Blagojevich administration, which faced a four-year federal investigation for how it doled out jobs.

Quinn said Thursday that the matter "deserves some serious review."

And Burris II is not the first Burris relative to turn up in state government. As we previously noted, in Roland Burris' final year as state attorney general, he hired his nephew, Steven R. Burris, as a staff assistant.

Before Blagojevich was arrested last year, Burris called the governor's top financial officer and chief of staff to recommend the same nephew for a state job, but budget constraints prevented the state from employing Steven Burris. Roland Burris' contact with the chief of staff was one of several contacts with Blagojevich insiders that he originally failed to disclose.

All domestic problems aside, Burris will face a serious threat to his Senate seat if Quinn's plan for a special election advances. Quinn said "two weeks is enough" time for Burris to decide if he will resign.

Quinn and legislators first have to rewrite state law. Under the current law, appointments to Senate vacancies last until the next federal election, which is scheduled for next year.

But Quinn called for the special election after state Attorney General Lisa Madigan issued a legal opinion Wednesday that said the state could enact the new law.

Under the 17th Amendment to the U.S. Constitution, a governor's appointments to fill Senate vacancies should be considered temporary until an election is held, Madigan said. (See here for some conflicting legal opinions on the matter).

Now the issue heads to the Illinois legislature, where Burris still has some allies.

Illinois Senate President John Cullerton (D-Chicago) said he was awaiting guidance from the Illinois House, where Speaker Michael Madigan, Lisa Madigan's father, has said lawmakers are divided on the issue.

While supporting a special election, Cullerton previously expressed concern about it costing taxpayers $40 million to $50 million. Quinn, however, has dismissed this high price tag, saying a special election was needed "after all of the controversy and scandal that we've had in our state" as a way to "clear the air."