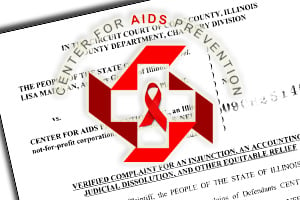 Four months after we first reported on a sketchy AIDS "charity" with a nationwide fundraising campaign, authorities have begun to crack down. But the move might not have much impact if other officials don't follow suit.

The Illinois attorney general alleged in a lawsuit (PDF) Thursday that the Center for AIDS Prevention solicited donations illegally and falsified official documents. The group's fundraising campaign has featured ads on the Web sites of the New York Times, the Chicago Tribune (PDF), the Los Angeles Times (PDF) and others for months, drawing attention to the charity's shady practices.

In March, we noted that the group promoted false health information (PDF) and ineffective herbal remedies (PDF), misled potential donors with claims about its battle to "stop AIDS," and repeatedly failed to provide a full accounting of how it spends contributions. Its financial records show no expenses, and there is no evidence that it has provided any services to people with AIDS, its stated mission.

Then, in June, we reported that public officials at all levels of government — including the Illinois attorney general and officials in California, where the charity now operates — did not effectively follow up on complaints and their own suspicions. Their inaction, which allowed the charity to continue its aggressive fundraising, highlighted the fragmented, often ineffective oversight of nonprofits.

The charges (PDF) from Illinois attorney general, which arose from a citizen's complaint, attempt to close the loop. However, if California authorities don't also act on the Illinois charges, which concern the center's fundraising and corporate status only in that state, the lawsuit could further underscore the problems of charity oversight.

Months after the group first formed in Chicago in 1987, authorities discovered that its director, Steve Neely, also known as Morrell S. Neely, had lied on Illinois charity registration forms (PDF). They banned the center from fundraising in the state and revoked its charitable status. The new charges, filed in Cook County Circuit Court, allege that the advertisements in the Chicago Tribune (PDF) and elsewhere violated that restriction, and separately, that Neely also lied on more recent forms he signed under penalty of perjury.

If the suit is successful, Illinois could seize money illegally raised there, bar Neely and others involved with the center from future charitable work in the state, freeze their assets, force them to pay back donations they may have “misused and/or wasted” with interest, and attempt to shut the group down for good by revoking its corporate status.

But the center's fundraising campaign has sought a national audience, and it's now based in California, where Neely moved at least two years ago, according to Illinois’ lawsuit, meaning many of the group's activities may be out of reach for the Illinois court.

Last month, a spokesman for the California attorney general told us, "If a charity's corporate status is revoked in another state but the charity is still doing business in California, it is still required to comply with our charity registration and reporting requirements.”

The center appears not to have complied with California's requirements so far, but has continued raising money with apparent impunity. Its charitable registration there – the legal requirement for soliciting funds – is still "pending," according to the state's registry of charities. The center nevertheless solicited money from Californians with ads in the Los Angeles Times (PDF) in June.

When we called back Monday, the spokesman said: "We are aware of what Illinois is doing. We're not going to comment on whether or not we've launched an investigation."

In addition to the allegations of unlawful fundraising, the Illinois attorney general's charges say the center "obtained its certificate of incorporation through fraud." After the center lost its charitable status in the late 1980s, it was dormant until 2007, according to an earlier interview with Neely and the court documents. When Neely reinstated the center with the Illinois secretary of state, he listed an Illinois office address at 4750 N. Broadway in Chicago. The new charges say the center did not have an office there from at least November 2007 until the filing of the charges.

Phone calls to the center were not answered, and an e-mail was not immediately returned. The Cook County assessor's office has no property records on file for the address.

We spoke to a few Chicagoans who have attempted to visit the center's Illinois office after reading our earlier reports. They said no building displays that street number. The only establishments on the block are a Bank of America, a concert venue called the Riviera Theater, and a liquor store with apartments above it.