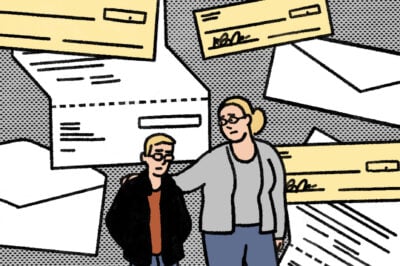 Illinois’ top education official urged schools to stop working with police to ticket students for misbehavior, hours after an investigation by ProPublica and the Chicago Tribune revealed that schools across the state were evading laws designed to prohibit the fining of students.

In a strongly worded plea sent to officials across the state, Illinois ​​State Superintendent of Education Carmen Ayala said the costly fines associated with the tickets can be immensely harmful to families, and there’s no evidence they improve students’ behavior. School officials who refer students to police for ticketing have “abdicated their responsibility for student discipline to local law enforcement,” she wrote Thursday, the same day the investigation “The Price Kids Pay” was published.

“If your district/schools are engaging in this practice, I implore you to immediately stop and consider both the cost and the consequences of these fines,” Ayala wrote. She highlighted that sentence in bold type in an 800-word email to superintendents and principals.

The Illinois State Board of Education intends to survey school districts to learn more about their disciplinary practices, Ayala wrote. She also warned that the state board will investigate “noncompliance with state law, where appropriate, and work with lawmakers to close loopholes in state law.”

On Friday, Gov. J.B. Pritzker said the Tribune-ProPublica report was “something we immediately jumped on” and conversations with legislators were already underway.

“We want to see what exactly is going to be required in order to make sure that this doesn’t happen anywhere in the state of Illinois,” Pritzker said. “I would bet that you’re going to see legislation about this.”

In “The Price Kids Pay,” ProPublica and the Tribune reported that local police are issuing thousands of tickets a year to students for violations of municipal laws, often for misconduct as minor as littering or vaping. Each ticket can come with hundreds of dollars in fines or fees, forcing many families into burdensome payment plans that can eat up paychecks. (Use our interactive database to look up how many and what kinds of tickets have been issued in an Illinois public school or district.)

Failure to pay can have lasting and severe implications. Some communities send debt from school tickets to collection agencies and warn of wage garnishment, liens and loss of driving privileges if the debt is not paid. Other municipalities have used a program available through the state comptroller’s office to deduct money from individuals’ tax refunds and payroll checks.

“The only consequences of the tickets are to impose a financial burden on already struggling families and to make students feel even less cared for, less welcome, and less included at school, which in turn leads to more antisocial and defiant behavior,” Ayala wrote in her letter.

An Illinois law passed in 2015 prohibits schools from using fines to discipline students. Instead, the investigation found, schools have been referring students to police, who then write costly tickets — taking advantage of what Ayala referred to as a “loophole” in the law. Students received more than 11,800 tickets for school misbehavior in the last three school years, reporters found.

Another law, dating to 2019, directly bans schools from reporting truant students to authorities so the students can be ticketed. But the investigation identified about 40 schools or districts that have been referring students to police for truancy.

The investigation found that students were issued tickets most frequently for possession of vaping devices or cannabis, disorderly conduct, fighting and truancy. But police also wrote tickets for such offenses as littering, being disruptive and property damage — for breaking a soap dish in a school bathroom, for example. The investigation focused on high schools but found that children 12 and under also had been ticketed in some K-12 districts.

The investigation examined 199 school districts and identified ticketing of students in 141 of them. To understand the frequency and impact of ticketing in schools, reporters filed 500 Freedom of Information Act requests to districts and police departments and attended more than 50 hearing dates in courts and municipalities across the state.

So many students get ticketed in some cities and towns that students make up the majority of people attending their municipal hearings for ordinance violations. The hearings are usually held during the day, forcing students to miss school. Ayala noted that ticketing students for truancy “may actually worsen student attendance.”

In her letter, Ayala wrote that while some people who did not grow up poor may not understand the impact of a $250 fine, it can force people to choose between paying for groceries, buying gas to get to work or paying the heating bill.

“For the more than 50 percent of our students and families in Illinois who qualify as low-income, paying $250 for a fine means the lights in the house will literally shut off, mom and dad will have no fuel to get to work, or there will be no hot meals on the table,” she wrote. “Even a $40 fine has a tangible impact on the safety, security and wellbeing of an entire family.”

Pritzker said “issuing fines to students who are in our K-12 system is not helpful,” adding, “It doesn’t help, it doesn’t change the behavior, and it just puts families at risk.”

In guidance issued last month, the state board of education and Attorney General Kwame Raoul urged schools to reevaluate punitive disciplinary policies such as suspensions; the guidance did not address police citations.

The state board also has been working with educators in about a half-dozen school districts this year on more positive behavioral interventions for students. Through the board’s Partnership for Disciplinary Equity in conjunction with several universities, funded with $2 million in federal pandemic relief funds, K-12 educators are learning about restorative justice practices and other techniques that emphasize resolving conflicts with discussion and problem-solving.

​​The legislators behind the 2015 law prohibiting schools from fining students have said they were troubled to learn from the Tribune and ProPublica that police were issuing costly tickets to children at school. The current House speaker, Emanuel “Chris” Welch, who was a sponsor of the legislation, said the General Assembly should revisit the law in light of the investigation’s findings.

Update, April 29, 2022: This story was updated to include statements from Illinois Gov. J.B. Pritzker.

Jennifer Smith Richards has been a reporter at the Chicago Tribune since 2015. Jennifer’s data-driven investigative work often focuses on schools and disability. Most recently, she uncovered the misuse of seclusion and restraint in Illinois public schools and investigated sexual abuse and assault in Chicago schools. She previously wrote about education for more than a decade at newspapers in Huntington, West Virginia; Utica, New York; Savannah, Georgia; and Columbus, Ohio. She is a member of the ProPublica Distinguished Fellows program.