This week’s ProPublica Illinois newsletter is written by Jennifer Smith Richards, a Chicago Tribune reporter who has been working with ProPublica Illinois reporters Jodi S. Cohen and Lakeidra Chavis to investigate the use of seclusion and restraint in Illinois public schools.

In the year that we’ve reported on restraint and seclusion, we have worked hard to become experts on the topic.

We’re not educators, but we are dedicated learners. We read books and studies about how to work with children who have behavior disorders, and we talked to academic experts and researchers across the country about seclusion, or confining students in a place they can’t leave, and physical restraint. We learned by observing, too. ProPublica Illinois reporting fellow Lakeidra Chavis and I spent two days watching a Crisis Prevention Institute, or CPI, training for educators in the Chicago suburbs.

We saw school workers learn about verbal de-escalation and how to safely break free if a student grabs their hair or bites them. We saw how a CPI trainer walked them through standing and seated restraints and how to decide what type to use.

But we wanted to learn by doing, too. So I asked my editors at the Chicago Tribune to send me to a five-day training in Peoria last March. They agreed that this would help me better understand what school employees are supposed to do during a crisis. The state currently requires school workers who use physical restraint to be trained at least once every two years and to be taught alternatives to restraint, including de-escalation techniques.

Therapeutic Crisis Intervention, a Cornell University-based program, did not want an observer in the small session but agreed to allow one of us to participate.

So I signed up.

I learned about how children cycle through a crisis and how to help them calm down when upset, and I practiced how to stand in a nonthreatening way. I acted out scenarios with the other class members, playing the role of the compassionate adult and then the irate child.

And then, when it was time to practice physical restraints, the trainers leading the class pulled out mats.

The trainees got paired up to go through the motions of restraining a child: standing, sitting, how to do a “takedown” to the floor. Everyone else there had taken TCI courses before, knew the material and was preparing to teach the methods back at the residential facilities, psychiatric hospitals and schools where they worked.

I was the new student, which meant I had a lot of catching up to do. I spent the evenings studying in my hotel room.

The seriousness with which the trainers and the participants approached the physical training has stayed with me. The trainers began by issuing some dire warnings: Restraints gone wrong can be deadly. You should never restrain a child when your emotions aren’t in check. And do not deviate from the techniques being taught — the safety of the worker and the child depends on doing them correctly.

The participants went through most of the motions in silence. You could have heard a pin drop. I found myself holding my breath.

Having read the details of thousands of restraints that had taken place in Illinois public schools, seeing versions of those holds happen step-by-step in slow motion — with a willing adult, not a child, as the person being restrained — brought a critical point into focus for me: Restraint is intense. Forceful. Physically taxing. A child is being controlled with adult bodies.

At the end of the training, we took a written test on the material and then performed a graded role-playing scenario in which we had to pretend to debrief with a child after a crisis. (Yes, I passed both the test and the role-playing exercise.)

I’m not going to apply the training in my job, of course. But it was important for me to be there. When it came time for us to write about how schools in Illinois were using physical restraint, we understood those techniques, how they are taught, what it feels like — at least a little — to use them.

That insight helped us to answer this question as we analyzed 50,000 pages of incident reports to write the project: Did the workers do what they’d been taught?

In so many cases, the answer was no. The training made it clear that physical restraint should be used only in a safety emergency, but we documented thousands of times when school employees restrained children for inappropriate reasons.

When students refused to come in from the playground or balked at putting away a toy from home, staff members used restraint to control them. I thought back to the warnings the trainers had issued against performing restraint when you’re angry or frustrated. I thought back to those moments on the mats when the trainees were holding down arms and legs and how, even when the person being restrained offered no resistance, the act felt so visceral, so invasive.

Even before we published our story on physical restraint, Illinois schools had begun to change their practices in response to our reporting. As part of emergency actions the Illinois State Board of Education took the day after we published our initial story about seclusion, the agency restricted the types of restraint that could be used. Permanent rules are in the works now.

We’ll continue to report on what’s happening. Thanks for reading — and learning — with us.

To tell us about seclusion or restraint practices at your child’s school, email us. 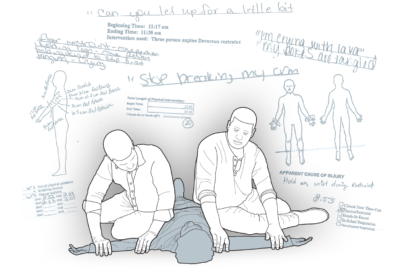