With the coronavirus outbreak creating an unprecedented demand for medical supplies and equipment, New York state has paid 20 cents for gloves that normally cost less than a nickel and as much as $7.50 each for masks, about 15 times the usual price. It’s paid up to $2,795 for infusion pumps, more than twice the regular rate. And $248,841 for a portable X-ray machine that typically sells for $30,000 to $80,000.

This payment data, provided by state officials, shows just how much the shortage of key medical equipment is driving up prices. Forced to venture outside their usual vendors and contracts, states and cities are paying exorbitant sums on a spot market ruled by supply and demand. Although New York’s attorney general has denounced excessive prices, and ordered merchants to stop overcharging people for hand sanitizers and disinfectant sprays, state laws against price gouging generally don’t apply to government purchases.

With little guidance from the Trump administration, competition among states, cities, hospitals and federal agencies is contributing to the staggering bill for fighting the pandemic, which New York has estimated will cost it $15 billion in spending and lost revenue. The bidding wars are also raising concerns that facilities with shallow pockets, like rural health clinics, won’t be able to obtain vital supplies.

As the epicenter of the pandemic, with about 40% of the nation’s coronavirus cases, New York state is especially desperate for medical equipment, no matter what the tab. “We know that New York and other states are in the market at the same time, along with the rest of the world, bidding on these same items, which is clearly driving the fluctuation in costs,” budget office spokesman Freeman Klopott said in an email.

The Office of General Services, New York’s main procurement agency, declined to say which sellers were inflating prices for essential medical gear. “At this moment in time the New York State team is focused on procuring goods and services based on current market conditions,” OGS spokeswoman Heather Groll wrote in an email. “There will be time to look back and pull together info on all this, that time will be when the pandemic is over.”

“What Mayor Turner mentioned was not an isolated incident but rather the norm for today’s extreme demand on masks,” Benton told ProPublica. “Given the urgency of the city’s COVID-19 response and the focus on doing the work, the need for masks and other supplies, at this time we see no value in publicly calling out other cities or companies by name.”

That same price was apparently too much for the U.S. Coast Guard. It ordered 1 million N95 face masks for $5 apiece on March 17, then downgraded the order to 200,000 masks, before canceling altogether, according to federal procurement databases and interviews with the contractor, Clean Harbors.

In his daily press conferences, New York Gov. Andrew Cuomo has often complained about having to compete with states and the Federal Emergency Management Agency for personal protective equipment, and ventilators for patients in respiratory failure. “It’s like being on eBay with 50 other states bidding on a ventilator,” Cuomo told reporters on Tuesday. “And then, FEMA gets involved and FEMA starts bidding! And now FEMA is bidding on top of the 50! So FEMA is driving up the price. What sense does this make?”

A FEMA spokesperson said that “if a bidding conflict does arise, we will work closely with the state to resolve it in a way that best serves the needs of their citizens.” FEMA has not disclosed the prices it has paid for supplies and equipment during the pandemic.

Typically, New York state buys a wide range of medical supplies from a list of approved distributors, which agree to provide those goods at a set price. Contracts are negotiated in bulk and over the long term, with public solicitations that generate multiple competitive bids. 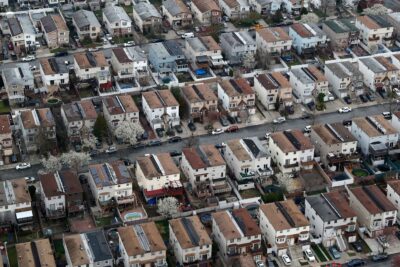 That changed with the coronavirus outbreak. New York state invited anyone with needed supplies to sell them to the state, which means that prospective vendors can ask whatever prices the market will bear. Now, after running through their inventory, vendors are passing on higher costs from their own suppliers.

Hackensack, New Jersey-based Shield Line LLC, a recently approved New York state vendor, has a price list that includes 3.5 cents per glove and 3 cents for a simple surgical mask. But its CEO, Joe Kastner, says he has mostly sold out. If New York, which hasn’t bought from him yet, was to order medical gear now, he might have to raise his prices, he said. He gets some of his products from Chinese companies, which reduced exports at the height of the epidemic there and are now resuming sending supplies to the U.S. — but at a higher price. “In some cases the cost is 15 to 20 times higher,” Kastner said.

Neither federal nor state law accounts for a situation in which government agencies at all levels are vying with each other for the same goods. “The government has in normal times a lot of things to protect it, including lengthy contracts and oversight,” said Justin Oberman, a former Transportation Security Administration official who now consults with businesses trying to navigate the federal procurement process. “In this case, raised voices may end up carrying the day.”

Normally, there’s no such crime as price gouging. In most states, it’s only illegal during a declared state of emergency. During the current crisis, New York and other states have activated their price gouging statutes. However, most of these laws only apply to the sale of consumer goods and services, not to purchases by states or by private or nonprofit businesses, said Gretchen Jankowski, a commercial litigation attorney with Buchanan Ingersoll & Rooney. In order to go after a company for price gouging the state in Michigan, for instance, prosecutors would have to prove price fixing or fraud — a much higher bar.

Price gouging laws in New York state and New York City do not apply to state and city purchases, such as the $248,881 X-ray machine. While X-rays aren’t recommended to diagnose COVID-19 patients, they are often used to assess how much damage the disease has done to a patient’s lungs. Portable machines are more desirable than fixed machines because they help reduce the spread of infection. Caregivers don’t have to bring patients to an X-ray room; the machine comes to them.

New York is paying bloated prices for another reason: Large national distributors are reluctant to steer more equipment to states with the most coronavirus cases. For fear of being accused of favoritism or even collusion, and in order to prevent stockpiling, they’ve put all of their customers on the same “allocation,” or what a customer purchased in the past. Distributors say the federal government should step in to help them adjust those allocations based on need.

“Only the federal government has the data and the authority to provide this strategic direction to the supply chain and the healthcare system,” Health Industry Distributors Association President Matthew Rowan wrote to FEMA administrator Peter Gaynor last weekend.

Dozens of cities have signed on to a letter coordinated by the nonprofit Public Interest Research Group asking the federal government to designate a “medical equipment czar” who would buy all the supply and fulfill requests from local jurisdictions. A bill sponsored by Sen. Chris Murphy, a Connecticut Democrat, would do the same.

WIthout federal intervention, states and hospitals may only become more vulnerable to the demands of brokers and speculators outside the normal supply chain, said Chaun Powell, vice president for strategic supplier engagement at the national health care consultant Premier Inc., which helps negotiate contracts for hospitals and health systems.

“The more COVID patients they get, the more masks they’re going to burn,” Powell said. “They’re getting desperate because they’re running out faster, so they’re willing to pay.”