There are more than 6,000 active gas wells in Pennsylvania. And every week, those drilling sites generate scores of complaints from the state’s residents, including many about terrible odors and contaminated water.

How the Pennsylvania Department of Environmental Protection handles those complaints has worsened the already raw and angry divide between fearful residents and the state regulators charged with overseeing the burgeoning gas drilling industry.

For instance, the agency’s own manual for dealing with complaints is explicit about what to do if someone reports concerns about a noxious odor, but is not at that very moment experiencing the smell: “DO NOT REGISTER THE COMPLAINT.”

When a resident does report a real-time alarm about the air quality in or around their home, the agency typically has two weeks to conduct an investigation. If no odor is detected when investigators arrive on the scene, the case is closed.

“The time that it takes them to respond is something people are concerned about,” said Matt Walker, a community outreach director for the Clean Air Council in Pennsylvania, an environmental advocacy organization. Waiting a few days to two weeks to respond to odor complaints, he said, is “way too long.”

George Jugovic, who served as a regional director for the DEP until 2012, agrees. Jugovic said the department is only set up to respond quickly to potential emergencies.

“It’s a problem,” said Jugovic, who since leaving the department has served as counsel to a local environmental group.

Rebecca Roter said she experienced the problem first hand last year. On a cool April evening in 2013, Roter said she was cooking dinner in her Susquehanna County home when a “nauseating” smell overwhelmed her. Roter said she walked out to her front porch, pulled her gray hoodie over her nose and mouth and quickly drove her car to the site of a nearby gas well being fracked.

Roter said she saw plumes of dust rising into the air. That evening, Roter said she wrote to the DEP, recounting the events of the day and requesting that they send out a field agent to follow up. Four days later, the agency sent out an investigator.

The DEP later notified Roter in writing that the investigator had found “nothing out of line” and that it had concluded that “the operation appeared to be conducted as per standard procedure.”

Roter said she is convinced the investigator simply didn’t detect any smell when he responded 96 hours after her report. The odor has recurred repeatedly in the months since, she said, and she has no idea how alarmed to be.

The concerns of residents like Roter are not likely to be eased by a study published today in Reviews on Environmental Health, a peer reviewed journal. The study, researchers say, confirms what they have long suspected about natural gas operations — that emission levels from these sites spike drastically over short periods of time, making it hard to assess the true threat to people’s health.

Researchers at the Southwest Pennsylvania Environmental Health Project collected real-time readings of particulate matter — soot, dust and chemicals — in 14 homes in Washington County, a heavily drilled part of the state. They found repeated episodes during which measures of contaminated dust rose sharply, to dangerous levels in the course of a day.

David Brown, the lead researcher on the study, said that a person in such circumstances could get what amounted to a full day’s exposure in half an hour.

The American Petroleum Institute did not respond to repeated requests for comment. The Pennsylvania Independent Oil and Gas Association declined to comment on the Environmental Health Project’s study but said that the oil and gas industry is “heavily regulated” and that the association’s member companies “strive to comply with numerous federal and state air quality related rules, regulations, and reporting requirements.”

Still, residents like Roter, who has over 20 gas wells within a mile of her house, fear that the exposure to contaminants could quickly add up. It’s one of the reasons, she says, she is frustrated by the DEP’s response to her complaints.

“DEP has been prompt and responsive in regards to air quality concerns surrounding the natural gas industry,” she said in response to questions from ProPublica. She added that the department had recently toughened oversight of the industry, and that oil and gas companies were no longer exempt from complying with basic permitting requirements.

The information provided by the DEP shows that between 2011 and 2014, the department received over 2,000 complaints about oil and natural gas operations. Water quality issues featured prominently in the list of complaints. The DEP also registered 110 of the complaints as odor issues.

In Southwestern Pennsylvania, a corner of the state that has seen extensive fracking operations, there were 617 registered complaints over those years, including 47 involving troubling odors.

In one-third of the cases that were investigated, inspectors reported that no odors were detected at the time of inspection and closed the case. Inspectors typically visited residents within a week of filing the complaint.

In only a handful of cases did the inspectors detect odors during their visit and follow up by citing the company involved. The citations, known as a Notice of Violation, required the operators to correct the problem, but did not carry fines.

ProPublica’s request for more details on the investigations and violations is still pending.

John Quigley, a former director of the Pennsylvania Department of Conservation and Natural Resources, said the need for greater transparency in the oversight of the fracking industry was real and urgent.

In 2007, Pennsylvania produced close to 10 billion cubic feet of gas from the Marcellus formation. By 2012, that number had grown to over two trillion cubic feet. With this dramatic increase in gas production, concerns about environmental pollution and public health have risen sharply and the DEP has become a target for anger among worried residents.

Activists and environmental groups have accused the agency of being overly deferential to the gas industry, and defensive and slow moving in its dealings with the public.

“It was very top down, very secretive and paranoid about who the enemies were,” said Jugovic, the former agency official, who left the department when Corbett succeeded Rendell as governor. “The control on information was significant.”

Earlier this month, Chris Abruzzo, the current head of the DEP, publicly acknowledged criticism about the agency’s transparency issues and said he wanted to change public perception of the agency.

Critics of the state’s dealings with the gas industry have long highlighted the history of financial ties between the industry and state officials, including former Democratic Gov. Ed Rendell and current Republican Gov. Tom Corbett.

Last year the Public Accountability Initiative, a nonprofit watchdog organization focused on the intersection of government and business, released a report on what it called Pennsylvania’s revolving door between the government and the gas industry. It concluded that at least 20 DEP employees have also held energy industry jobs either before or after their agency jobs.

Gov. Corbett’s office did not respond to a request for comment.

ProPublica obtained an internal complaints manual used by the DEP to maintain a consistent approach in dealing with environmental complaints. The manual directs staff to assign routine air quality issues a priority level of 2. The category comprises complaints that are “serious but not likely to escalate within 7-10 days but pose an existing or potential adverse impact on the environment or public health.” 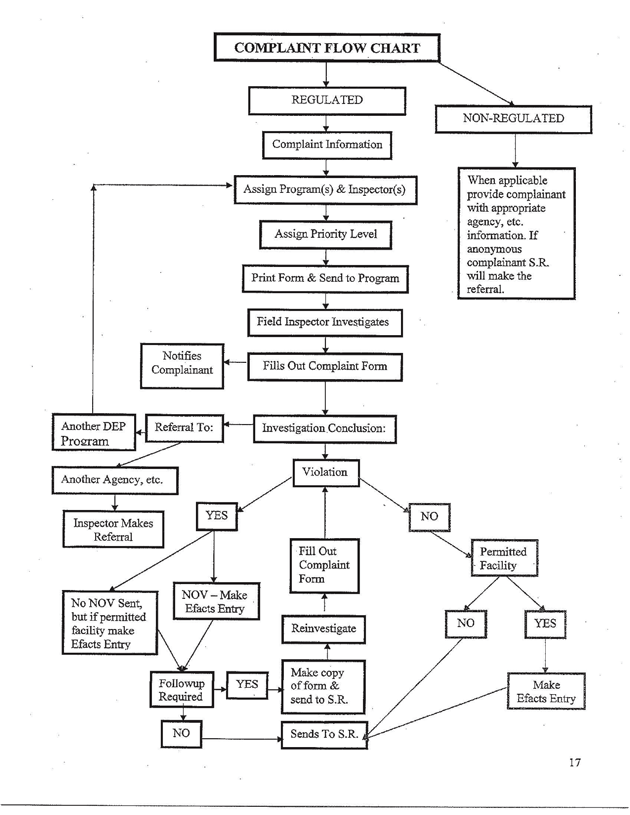 According to the internal complaint manual, DEP complaint coordinators, who answer calls on regional complaint hotlines, are responsible for assigning response priority levels.

In 2012, the Clean Air Council, which has been tracking the DEP’s enforcement of regulations related to air quality, sent a letter to the U.S. Environmental Protection Agency, complaining about the alleged shortcomings of Pennsylvania’s oversight.

The council said it had been contacted by many residents who asserted that complaints they had filed with the DEP had never been fully investigated. In some cases, the council claimed, residents had said the DEP’s complaint hotline had not been working when they called.

“People have been told things like ‘stop calling’ and ‘if you’re air is bad, then maybe you shouldn’t go outside,’” said Walker, the council’s community outreach director.

Kasianowitz did not respond to ProPublica’s questions about allegations of inadequate or unprofessional behavior by agency staff.

Gas drilling operations include several processes that release toxic chemicals into the air. The type and level of chemicals released varies from hour to hour depending on the type of activity taking place on the well pad.

Despite this, researchers and regulators seeking to assess the health threat of fracking operations have typically used measurement devices that capture air emissions over longer periods of time, often 24 hours.

These levels are then, in many cases, compared to the EPA’s National Ambient Air Quality Standards, which were created over 40 years ago at a time when large, 24-hour-a-day sources of pollution such as coal fire plants and steel mills were dominant.

“You can’t use 24-hour standards if the health effect occurs within a few minutes,” said Brown, the lead author of the study released Friday.

The question of whether episodic bursts of contaminated air from fracking could pose an unappreciated but real health menace was first explored in West Virginia in 2010.

West Virginia’s Department of Environmental Protection asked Michael McCawley, then a professor at West Virginia University’s Health Sciences Center, to study air emissions from fracking operations in the state. McCawley found the contaminants he detected at fracking sites fluctuated over a wide range.

Those findings mirror those in the Pennsylvania study published on Tuesday.

Research has shown that fracking operations can release an array of toxic chemicals — some carcinogenic, others capable, at significant enough levels, of causing serious neurological and respiratory damage. The worry, Brown says, is that these chemicals are attached to the microscopic dust particles that he detected and can reach the bloodstream after being inhaled.

McCawley and Brown say that the wide fluctuations that they’re picking up on are also attributable to operators not using the best available technology to limit possibly harmful emissions.

State and federal regulations, for instance, do not require operators to use equipment that would capture all emissions during drilling. Often, gases are vented or flared into the air. The regulations also don’t consider activities, like diesel truck traffic, that degrade air quality at the fracking site.

“The law requires best technology,” said McCawley, and the data, he says, is telling us that the gas drilling industry is “not working according to the strict definition of the law.”