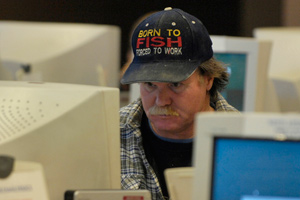 Unemployment in Idaho has hit a 22-year high, and the state has run out of money to pay unemployment insurance claims.

The state has already borrowed almost $6 million from the federal government to keep benefit checks in the mail, and is expected to borrow as much as $60 million by the end of the year.

To restore solvency, the state's unemployment insurance system is undergoing severe belt-tightening at the worst possible time -- the middle of a recession -- when ideally the state should be spending freely to stimulate the economy.

Businesses saw their unemployment insurance tax skyrocket by a jaw-dropping 70 percent this year, and face a similar increase next year. The maximum benefit workers can get will be cut by 3 percent.

So far, this sounds a lot like the other 14 states that have had to borrow money to keep their trust funds afloat. (Is your state’s unemployment insurance system in trouble?) The difference: Idaho actually planned it this way.

As we detailed last week, a New Deal-era compromise means there are 53 separate unemployment insurance systems for the 50 states, the District of Columbia, Puerto Rico and the Virgin Islands. There is limited federal oversight, giving states wide latitude to set their tax and benefit structures. Many states set tax rates to unsustainably low levels even before the recession started -- leaving politicians and businesses panicking as their systems collapse under the weight of record unemployment.

But not in Idaho.

In 2005, with the support of business and organized labor, the Legislature halved the reserve level required in the trust fund, resulting in record low taxes for the next two years.

"Their consensus, unanimously approved by the Legislature in 2005, set up a system that provides lower taxes to businesses and higher benefits to workers during good times and has both share the burden of supporting the system during downturns like we're experiencing now," Department of Labor Director Roger Madsen told the Idaho Press-Tribune last year.

So essentially, instead of choosing to accumulate reserves so that taxes could be lowered and benefits increased during a recession, Idaho decided to do the opposite.

"Business guys said they wanted money in their pocket rather than the trust fund," Bob Fick, a Department of Labor spokesman, told ProPublica. "The belief at the time was in the new economy we wouldn't have recessions like we've had in the past."

Despite the steep tax increases, business owners say there are no plans to return to a funding plan designed to avoid unemployment insurance tax increases during a recession by saving money ahead of time, Fick said.

"To their credit, business has stuck with the formula they agreed to," he said.