It is just a snapshot, but it makes for a plenty ugly picture all the same: The New York City Commission on Human Rights surveyed more than 3,000 Muslim, Jewish and Sikh residents of the city late in 2017 and found striking rates of racially and or religiously motivated assault, harassment and workplace discrimination.

Lurking in those broad numbers are some more specific outrages: 18 percent of Sikhs surveyed said they had been denied service by a local business; roughly 6 percent of those surveyed who said they wore religious garments reported having had someone try and tear those garments off them.

The commission, which enforces the city’s anti-discrimination statute governing employment, housing and public accommodation, said last month’s “first of its kind” report was meant to “rigorously document” experiences of bias harassment, discrimination and acts of hate. They survey was conducted in the late fall of 2017, and asked respondents to report incidents dating back to mid-2016, the height of a volatile election season.

The findings are consistent with national and local trends. The FBI and the New York City Police Department have seen increases in reports of hate crimes in the last several years. A recent report from the California attorney general’s office showed that hate crimes in the state have increased by about 17 percent in the last year and have been on the rise for the last three years.

Yet the commission’s survey underscored a stubborn fact about bias-driven harassment and crimes: People by and large opt not to report them. Fewer than one in three people who said in the survey that they had been verbally harassed or physically assaulted said they reported it to anybody — whether that be the police, a local advocacy group or religious leaders in their communities. And while Sikhs reported distinctively high rates of abuse — Sikhs under 35 were nearly twice as likely to experience verbal harassment as others surveyed, for instance — they were the least likely to report these experiences.

Ramatu Ahmed, executive director of the Bronx-based African Life Center, a community organization that assists immigrants with social services, noted that the low rates of reporting incidents reflects a general apprehension about contacting police, a reluctance often shaped by people’s interactions with police in their home countries. 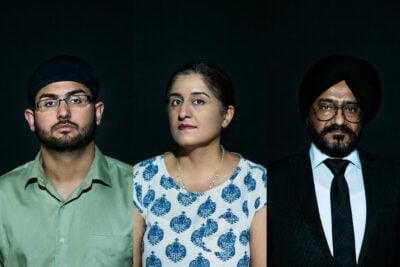 “Back in my culture, you don’t do much with the police,” said Ahmed, who is an immigrant from Ghana. “You do everything to not associate yourself with the police and a lot of people bring that mentality when they come here.”

The commission offered some breakdowns of those it surveyed — 50 percent were Muslim; 31 percent were Jewish; 6 percent were as young as 16 or 17 and 10 percent were over 65 — but also said that in its public report no numbers or percentages were cited unless they had been deemed statistically significant.

The population perhaps most at risk? Black Muslim women in the Bronx, where one in five reported being physically assaulted in the months in question.

Carmelyn P. Malalis, the city human right commissioner, said one of the things that struck her in the survey was how many of those reporting abuse “have accepted these indignities as part of their everyday lives.”

“Sadly, the high rates of bias and discrimination revealed in this survey were not surprising given the recent wave of xenophobic and Islamophobic rhetoric surrounding changes in federal immigration policies and bias-motivated attacks and harassment against these communities,” said Malalis.