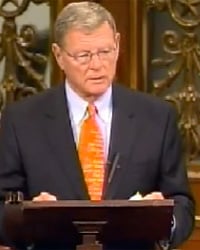 In a lengthy speech Tuesday Sen. James Inhofe, R-Okla., the ranking member of the Senate Environment and Public Works Committee, defended the natural gas production method of hydraulic fracturing and warned that legislation reinstating the Environmental Protection Agency's authority over the process would be a "disaster." Inhofe pointed to recent reports showing that America's reserves of natural gas are far greater than previously thought, and said that developing those reserves — which he pointed out depends on hydraulic fracturing — could help secure America's energy future.

For 26 minutes, Inhofe offered a detailed response to critics of the process and reiterated the central arguments that have been offered by the energy industry and lobby: that fracturing is safe; that recent reports say regulating it would cost Americans billions in jobs and lost tax revenues; and that the Safe Drinking Water Act, the federal water protection law from which fracturing is currently exempted, was never intended to oversee the process in the first place. Many of these assertions have been challenged in a series of articles by ProPublica. Read the full text of Inhofe's speech, and watch the video, here.