Christi Estrada has no idea when she’ll be able to visit her son again.

John Estrada, 33, has autism. He lives in a government-funded group home in Tucson, Arizona. In mid-March, Christi received a call informing her that John’s house was quarantined because of fears of COVID-19. He was not allowed to go to a day program where he worked one-on-one with a care provider, participated in games, drew on his iPad and went hiking and bowling. Christi was barred from visiting.

Rob Seaver is equally frustrated — but for different reasons. His daughter, Raegan, 19, also has autism and lives in a group home in Glendale, a Phoenix suburb. But administrators there have not imposed a lockdown. Rob is terrified that Raegan is going to get sick. The home is running low on toilet paper and hand sanitizer, he said. His frantic emails to state administrators went unanswered for days.

Arizona has a national reputation as one of the best states at providing services for people with intellectual disabilities. And yet residents, families and providers said that since the COVID-19 crisis exploded, they have received almost no guidance from the state’s developmental disability agency about how to best provide services and protection to stay safe and in business.

Uncertainty over the best practices for protecting the intellectually disabled from infection has led some providers to close their programs or divert aides from providing home visits. Some parents have been left to provide 24-hour care to children with intensive health needs. People with intellectual disabilities are struggling with unfamiliar and sometimes upsetting new routines.

“I don’t know how we can quarantine any one of our folks who tests positive in a congregate setting,” said Bob Bennetti, executive director of the Tucson Residence Foundation, which runs group homes and other residential facilities for adults with intellectual disabilities. “Frankly, I wouldn’t know what the hell to do. This goes beyond having a mask. Hospitals don’t have them, what makes you think a group home would have them?”

Arizona’s Division of Developmental Disabilities, or DDD, provided some instruction this week. Caregivers who were previously restricted to group settings can now offer treatment in clients’ homes.

Advocates, families and service providers say more must be done by the agency charged with providing care for people with intellectual disabilities. So far, there has been no official word on whether any group homes or intermediate care facilities in Arizona have experienced outbreaks of the disease.

“The world is tough for everyone right now. We recognize that. But the agencies that care for people with disabilities and the elderly are really an afterthought,” said Jon Meyers, executive director of The Arc of Arizona, an advocacy group. “We’re so ill-prepared to keep them safe it almost seems inevitable the numbers are going to be horrific.”

In mid-March, the governor closed public schools and the mayors of Tucson and Phoenix did the same with bars and restaurants. The state Department of Health Services implemented policies in nursing homes and assisted living facilities to promote social distancing and keep residents safe.

But the disability agency, which serves more than 35,000 people, including 4,000 or so living in group and developmental homes and around 8,000 in day programs, issued no such guidelines for the facilities under its purview.

Even on Tuesday, as the state prepared for a stay-at-home order from Gov. Doug Ducey, some group homes were quarantined, others were not, and families and providers reported shortages of personal protective equipment and food. Some day programs had closed, others remained open. Some services, like speech therapy, were being offered remotely.

Donna Gallagher runs Southern Arizona Family Services, which houses the day program that John Estrada attended. She was able to transfer the caregiver’s job from Estrada’s day program to another group home. Estrada is receiving full-time care from staff at his group home.

On Tuesday, Gallagher felt compelled to deny care to a family with a child with significant disabilities because some of the family members were sick with fever.

“I can’t send anybody in in good conscience,” Gallagher said.

Nicole Jorwic, national policy adviser for The Arc of the United States, said that Arizona joins other states that have had difficulty providing basic instructions to the intellectually disabled and their caregivers on how to adjust to the COVID-19 outbreak.

Several intellectually disabled people living in group homes in other states have already died or been sickened by COVID-19. ProPublica reported last week on the death of an elderly person with Down syndrome at a group home in Albany, Georgia, a small town in the southern part of the state that is struggling with an outbreak of COVID-19.

“Around the country we’re hearing real concern about basic health and safety,” Jorwic said. “Individuals with disabilities and their families are attempting to figure out this huge disruption in schedule and ways to eliminate the regression that it very likely could cause for a lot of folks.”

Even the most basic of preventative practices, such as social distancing and hand-washing, were neglected for weeks in some day programs and group homes in Arizona, according to parents. 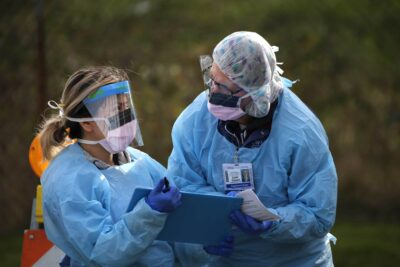 Disaster preparedness plans in Washington and Alabama say people with cognitive issues are a lower priority for lifesaving treatment. Disability advocacy organizations have asked the federal government to clarify the plans.

Will Humble, the former director of the state’s Department of Health Services and current head of the Arizona Public Health Association, noticed in mid-March that there were no hygiene policies in place at the Scottsdale day program his son, Luke, who is 22 and has Down syndrome, was attending.

Humble bought one of the last thermometers in stock at his neighborhood Walgreens for use at the program. He took it upon himself to write up a hand-washing policy. Luke continued going to the day program for another week or so, until his parents decided to keep him home from both that and his independent living situation.

“They went a couple weeks without knowing what to do,” Humble said.

Seaver is grateful to the people who work with his daughter, Raegan, who can at times lash out and become physically violent.

“I know a lot of people are making this stuff up as they go, but at the end of the day, my God, nobody was ready for this, and it’s scary because Raegan is really barely able to deal with this stuff,” he said.

“What’s the preparedness plan if somebody in the house gets it? There’s none.”