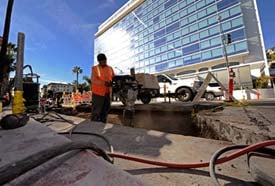 We can’t get enough of stimulus data and we know you can’t either, so we’ve updated our Recovery Tracker and added some new features. And you can now count more stimulus money closer to home because we included more information about local projects.

Dive in and see what stimulus money is going to your county.

Once again, we took the latest data on the government’s stimulus Web site, Recovery.gov, cleaned it up, and added thousands of additional spending records. Our previous trackers showed just the prime recipient. This time, we’ve tracked the money to the sub-recipients where we could. That means that instead of seeing a chunk of money going to your state Department of Education, you’ll see how much money your local counties received from the state.

We’ve also added data from Cash for Clunkers, a separate program to encourage drivers to trade in older cars that was extended using stimulus funds.

Our latest recovery tracker also includes tens of thousands of new records, not just because they were newly awarded, but because the information was not included in previous versions of federal data. Until recently, a coding glitch meant that thousands of Pell grants funded by federal stimulus money from the U.S. Department of Education did not appear on USAspending.gov. (And as a result, we did not have them in our last set of data.)

Go to our updated Recovery Tracker.