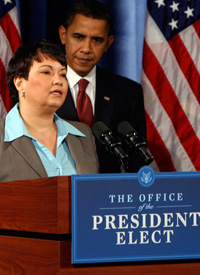 In the latest volley of a years-long battle involving the Environmental Protection Agency, the military and the White House, the EPA announced last week that it will delay its decision on whether to set a drinking water standard for perchlorate, a chemical in rocket fuel that has been found at harmful levels in drinking water across the country. The announcement that the EPA won't act until it receives advice from the National Academy of Sciences puts the contentious decision onto the already-heavy regulatory agenda awaiting Lisa Jackson, President-elect Barack Obama's pick to head the EPA.

Sen. Barbara Boxer, chair of the Environment and Public Works committee, has promised to raise the issue of perchlorate at Jackson's confirmation hearing tomorrow. Boxer has called the EPA's decision "to walk away from this problem and shrug off this danger...immoral."

The EPA estimates that as many as 16.6 million Americans are exposed to unsafe levels of perchlorate, which studies link to thyroid damage that can slow brain development in children.

Jackson, former head of the New Jersey Department of Environmental Protection, is no stranger to the perchlorate controversy. New Jersey was urged to regulate (PDF) the chemical in October 2005 by a panel of state scientists, environmental activists and industry leaders. But three years later, the DEP still hasn't completed a draft of the rule.

The panel made its recommendation after a statewide study revealed that unsafe levels of perchlorate had been found in six of 123 public water systems the state sampled in 2004. Each of those water systems serves more than 10,000 people (p. 41).

Jackson's predecessor, Bradley Campbell, promised to propose a perchlorate standard for drinking water by Jan. 31, 2006. But when Jackson moved from assistant commissioner to commissioner in February 2006, that deadline had passed. Standards were still being discussed last month, when Jackson left the DEP to become chief of staff for New Jersey Gov. Jon Corzine.

New Jersey DEP spokeswoman Elaine Makatura said the three years it has taken the DEP to develop a perchlorate regulation is not "atypical" and that the rule is now being reviewed by DEP's legal department and by the state's attorney general.

Meanwhile, New Jersey's DEP has criticized the EPA for not regulating perchlorate. In a November letter to the EPA written on behalf of Jackson's office, Jeanne Herb, director of DEP's office of policy and planning, said "we strongly urge USEPA to reconsider its determination." The letter said that New Jersey planned to regulate perchlorate by the end of 2008 and emphasized that its standard will be more stringent than the EPA's. New Jersey is considering a standard that would allow no more than 5 parts of perchlorate per billion parts of water.

"I am very disappointed that the state hasn't moved faster on developing a perchlorate standard," said David Pringle of the New Jersey Environmental Federation, who sat on the panel that urged the state to regulate perchlorate. "That being said, I fully lay the blame on the governor's office. DEP was ready to roll two years ago. It was the governor's office that prevented us from moving forward faster."

"If the bureaucracy in New Jersey is stymieing her efforts to do her job, then wait until she gets to Washington," Ruch said. "If she does not have the muscle to push these things through in her own state, then her accomplishments will be few and far between here."

For years Democratic members of Congress, the Government Accountability Office (PDF) and environmental advocates have criticized the Department of Defense and the White House for pressuring the EPA not to regulate perchlorate. In 2002, the EPA suggested limiting the amount of perchlorate in water to 1 part per billion. But in October it released a health advisory suggesting that 15 parts per billion is safe.

An Obama spokesperson declined to comment for this story, and Jackson did not respond to requests for an interview.