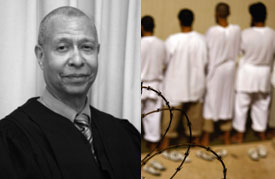 The federal trial judge who last year ordered the executive branch to release 17 Uighurs held at Guantanamo Bay into the United States – setting off a constitutional power struggle currently before the Supreme Court – decided on Wednesday that detainee Saeed Hatim is also being held unlawfully and should be let go.

Judge Ricardo Urbina gave no reasons for his decision, stating that an unclassified version of his written opinion will be available later.

Hatim, a citizen of Yemen who has been held at Guantanamo for more than seven years, filed a habeas petition in July 2005 seeking his freedom. The government alleges that he trained at a suspect camp in Afghanistan and supported the Taliban by helping to feed its fighters.

In the case of the Uighurs, Judge Urbina berated the government for delaying their release for years after they had been “absolved” of enemy status. Even if the president had “inherent authority to ‘wind up’ wartime detentions” for some period of time, he said, the Uighurs’ then seven-year detention had “already crossed the constitutional threshold into infinitum.”

In that earlier case Urbina criticized the government for “subverting” its own professed diplomatic efforts to resettle the Uighurs by publicly calling the detainees enemies, even though they were not. In this “exceptional” circumstance, he said, “the court’s authority to safeguard an individual’s liberty from unbridled executive fiat reaches its zenith.”

Urbina’s order of release for the Uighurs was blocked by a federal appeals court, after the Bush administration insisted the courts had no authority to demand that Guantanamo prisoners be freed in this country. The detainees, arguing that the Constitution’s guarantee against unjust imprisonment is at stake, persuaded the Supreme Court to agree to take another look and are still waiting for action. The Obama administration has managed to find homes abroad for some of the Uighurs, but it has adopted its predecessor’s stance in the pending case.