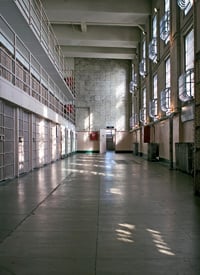 Or, more accurately: DOJ released a 5-year-old study based on data dating back to the 1990s.

The author of the study, which was commissioned by the DOJ's Office of Juvenile Justice and Delinquency Prevention, says federal officials allowed his work to gather dust for approximately a half decade before finally publishing it this month.

"This was the first national study on juvenile suicide in confinement and it was important to get the data out," said the author, Lindsay Hayes, a Massachusetts researcher and consultant who crafted the report as a contractor for DOJ.

Controversy over the report's delay was first reported by Youth Today, a newspaper geared towards social workers and youth advocates.

After scrutinizing 79 suicides that occurred between 1995 and 1999, Hayes came to several fairly startling conclusions, finding that 43 percent of the deaths happened in facilities "that did not provide any type of suicide prevention training" to frontline staffers, and that isolating teens in their rooms dramatically increased the risk of suicide.

Hayes' research also highlighted embarrassing gaps in government regulation. Oversight agencies in several states didn't even know about suicides that had transpired in county detention centers and private facilities and were not tracking deaths in such institutions.

Hayes, who is angry that the study languished, says he delivered his 15-page report in February 2004. While government reports often go through a heavy editing and revising process, Hayes claims the final draft of "Characteristics of Juvenile Suicide in Confinement" is identical to the version he wrote up five years earlier, aside from some minor copyediting.

"It's exactly the same document. None of the data has been changed," Hayes told us.

At Justice, a spokesperson said the department was investigating the delay but stressed that official reports are often years in the making. "We're doing some investigation about why it took so long," the spokesperson said. "That's all I can say right now."

Dan Macallair, executive director of the Center on Juvenile and Criminal Justice, a San Francisco nonprofit, said the report would have made headlines had it been released in a timely fashion.

Over the years, Hayes said, the Justice Department vacillated on the status of the document, saying first that it was fast-tracked for publication and later that it had been rejected and "unapproved." Last fall, Hayes complained about the delay to J. Robert Flores, then-chief of DOJ's juvenile justice office. "I wrote kind of a nasty letter to Mr. Flores saying I was extremely frustrated that this report didn't come out -- that there are youth dying," recalled Hayes.

The Obama administration recently replaced Flores with Jeff Slowikowski, a veteran staffer who is serving as the office's acting administrator.

This isn't the first time controversy has found Flores, who has been the subject of congressional hearings. In June he was questioned by the House Oversight and Government Reform Committee about millions of dollars in grant spending, with then-Chair Henry Waxman (D-CA) describing Flores' grant-making process as "neither fair nor transparent."

That same month, the Washington Postreported that Flores was the subject of a criminal probe into his "alleged use of government funds for personal travel expenses and his hiring of a politically well-connected contractor who allegedly performed little work in a high-paying job."