The Kentucky legislature passed a bill on Thursday that strips Secretary of State Alison Lundergan Grimes of her authority over the State Board of Elections, restructures the SBE and makes misusing the voter registration system a misdemeanor crime.

The bill takes multiple steps to scale back the level of control Grimes has asserted over the SBE in recent years, including removing the secretary of state as the chair of the board. The secretary will become a nonvoting member of the board, and the board will now include two former county clerks — one from each party.

ProPublica and the Lexington Herald-Leader published stories this year detailing the secretary of state’s office’s use of the voter registration system to look up information on political rivals, as well as the range of misconduct allegations against Grimes being explored by state investigators.

Records released last week confirmed that staff in her office had looked up those named in the reports by ProPublica and the Herald-Leader, including members of a state ethics agency currently investigating Grimes’ conduct.

Last October, the attorney general’s office appointed a special counsel to investigate ethics complaints made against Grimes, involving both a no-bid contract given to a campaign donor as well as an allegation she’s intentionally failed to comply with a federal consent decree dealing with the state’s voter rolls. Grimes, a Democrat, is also under investigation by two state agencies: The Executive Branch Ethics Commission is investigating similar claims, and the Personnel Board is investigating allegations that Grimes has created a hostile work environment and that she inappropriately searched the voter registration system to discover the political affiliation of potential and current employees.

There are no specific dates set for investigators to issue their findings, although the special counsel is expected to release his initial report in the coming weeks.

The Republican lawmakers behind the legislation — which passed largely along party lines — said they had grown to fear Grimes was exerting undue influence over state election matters. While the secretary of state is statutorily the “chief elections officer,” the process of helping counties facilitate elections has long been primarily managed by the SBE.

“In her last year in office, we needed to take significant steps to ensure our elections are protected, and to send a message to the next secretary of state — be it a Republican or a Democrat — that these types of shenanigans will not be tolerated,” said Sen. Damon Thayer, a Republican and the author of the bill.

In a statement released after the bill’s passage, Grimes said she was considering taking legal action to prevent the bill from going into effect, claiming it would dangerously centralize authority with the governor’s office. The only expansion of the governor’s authority under the bill is officially appointing two new board members, a role he already fulfills for the six current members who are selected by the parties.

Kentucky’s county clerks, who manage elections at the local level and operate largely independently from the state, widely supported the bill. Clerks from both parties have been critical of Grimes’ alleged interference in election policy. 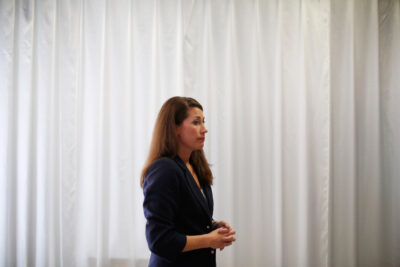 Julie Griggs, a Democrat and the clerk in McCracken County, called the bill a “good start” that will be “helpful” to the clerks. “I’m glad the vote went the way it did,” she said.

The Republican clerk in Kenton County, Gabrielle Summe, who is also the president of the statewide clerks association, said that the bill will help the clerks have more of a voice at the SBE. “We were ignored [by Grimes], and because she could control the State Board of Elections, we couldn’t even have a relationship with them,” she said. “We’ll move forward with better communication and a clearer process.”

Grimes has denied all of the accusations against her. She has said her staff used the voter registration system for legitimate purposes and has “at all times” followed the law. She has called the accusations of inappropriate searches, hostile treatment and abuse of power filed by two SBE employees — one Democrat and one Republican — “political.”

Some number of Democrats have sided with Grimes, and they called the legislation “vengeful,” saying it would “weaken” election systems. Democratic Rep. Angie Hatton called it a “big baby bully bill.”

During her time in office, Grimes has seized more authority over the SBE than any other secretary before her — dictating when board meetings were to be held, shifting the location of meetings from the SBE office to the Capitol, approving all records requests releases by the SBE and asking the board to pass a resolution granting her day-to-day authority over the SBE. Under her guidance, the secretary of state’s office also received access to the voter registration system for the first time. None of these moves violated existing state law but were in stark contrast to her predecessors’ hands-off treatment of the SBE and its employees.

“There was a situation where a politician identified a place in the law where it didn’t say they could do something and it didn’t say she couldn’t, and she drove a truck through that,” said Tres Watson, a Republican strategist in Kentucky and former communications director for the Kentucky GOP. Watson said the bill restores the prior power balance and called Grimes “the first truly partisan secretary of state that anyone can really remember.”

“When someone behaves like that, it opens the door to others,” he said.

Grimes, in her statement and in a tweet, said the bill would create “chaos.” Griggs and Summe took issue with the claim.

“I can’t imagine what that’s supposed to mean,” said Griggs, who said the bill would not change how voters cast their ballot or the way clerks manage elections. “We do our jobs and we do them well, and I don’t see that this is going to cause chaos in the least bit.”