Lockheed Martin has big business in Washington, with Defense Department contracts representing more than half of the company's $46.5 billion in net sales last year. And now, Lockheed has a former top lobbyist in a key position on Capitol Hill overseeing the company.

The revolving door swings regularly in Washington, but the size of the compensation package Sauer received from Lockheed when she left the company is notable. A financial disclosure form shows the defense giant gave Sauer $1.6 million in compensation around the time she took a buyout in January 2011.

At the moment, the stakes for Lockheed in Washington are even higher than usual, with the company leading the military contracting industry's charge to convince Congress to avoid a $492 billion, 9-year cut in military spending set to be triggered in January.

Lockheed CEO Robert Stevens was on the Hill this month warning that the company would have to lay off 10,000 employees if Congress does not make a deal. "Most tragically, we feel we will be unable to provide the equipment and support needed by our military forces," Stevens told the House. 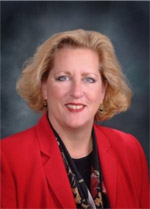 As staff director for the minority on the Senate committee, Sauer has an important role in the battle over the possible military budget cuts. The committee regularly makes decisions that determine the fate of Lockheed's business.

There is no law barring lobbyists from entering public service on Capitol Hill. But Ben Freeman, national security investigator at the Project on Government Oversight who wrote about Sauer Thursday, says that the presence of a former Lockheed executive in a key position overseeing the company is cause for concern.

"Some of the biggest issues in front of the Senate Armed Services Committee right now deal directly with Lockheed Martin programs," Freeman says. "These are big-dollar programs that are going through some troubles and need some oversight."

One example is Lockheed's F-35 Joint Strike Fighter, which has been plagued by cost overruns and other problems.

Brian Rogers, a spokesman for McCain, said in a statement that the senator made an "unsolicited offer of employment" to Sauer and that she accepted the offer "on a stop-gap, temporary one-year basis."

"When Ms. Sauer accepted Senator McCain's offer to lead his Armed Services Committee staff, she did so at her own financial detriment, as she was required to liquidate all remaining Lockheed stock and options in compliance with Senate Ethics Committee guidelines," Rogers said. (See the full statement.)

Sauer, who has spent much of her career on Capitol Hill in various capacities, is a specialist on the federal budget. She spent 23 years as a Senate staffer, including 14 years with the armed services committee, and a stint as McCain's legislative director. She left Capitol Hill to join Lockheed in 2000. (Sauer did not respond to a request for comment.)

Sauer spent a decade at the company, rising to be Lockheed's Washington-based vice president for acquisition policy, logistics, and budget. For most of the time, she was a registered lobbyist who lobbied in the Senate and elsewhere, according to disclosure filings.

"She was the corporation's federal budget expert," according to her bio posted on the site of the group Women in Defense, "responsible for tracking and analyzing the federal budget, both defense and non-defense. At various times, she was responsible for managing the corporation's senior-level interfaces with senior Executive and Legislative Branch officials on a wide array of programs and policy issues."

Rogers, the McCain spokesman, said that Sauer’s compensation was made up of pay from the buyout program, “normal annual incentive compensation” and “significant deferred compensation.”

Sauer's case has a precedent. Last year, the House Armed Services Committee hired Thomas MacKenzie, a Northrop Grumman lobbyist who received a large bonus from the company before starting his job on the Hill.