A House Democrat demanded on Tuesday that a former pesticide lobbyist who was appointed to the Department of Agriculture by the Trump administration release all emails she has exchanged with lobbyists or other representatives from her former industry.

Representative Bonnie Watson Coleman of New Jersey made the demand in a letter to the official, Rebeckah Adcock, after an investigation by The New York Times and ProPublica revealed that Adcock had met with her former industry allies despite a signed ethics agreement that limited such interactions. 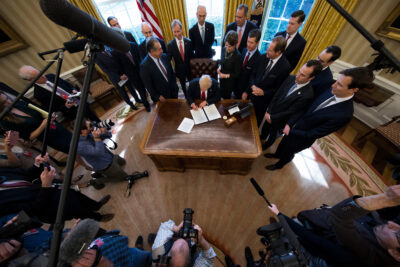 A Wide-Open Door for Pesticide Lobbyists at the Agriculture Department

Adcock took part in a meeting in May that included a lobbyist for her former employer, the industry trade group CropLife America, according to visitor logs at the Department of Agriculture. Participants in the meeting said that Adcock had discussed the effect of pesticides on water, a topic she previously lobbied on and was supposed to refrain from working on inside government.

The Agriculture Department, speaking on Adcock’s behalf, has said her actions did not violate the agreement, citing a 2009 memo by the Office of Government Ethics. Others have disputed that interpretation of the memo. The department also denied that Adcock had discussed issues forbidden by her agreement.

Adcock leads the deregulation team at the Department of Agriculture. In February, President Trump ordered major federal agencies to set up deregulation teams to cut red tape for businesses, but critics have faulted their secrecy and accused them of having deep industry ties.

The Times and ProPublica reported Monday that Adcock had refused in September to release the names of her deregulation teammates to congressional aides. On Tuesday morning, before she testified to two subcommittees of the House Committee on Oversight and Government Reform about deregulation, the Department of Agriculture provided the committee with a full list of names, Watson Coleman’s letter said.

But the letter said that the list was initially shared only with Republicans on the committee. When the Democratic members asked Adcock for the names during the hearing, she said the names had already been sent over, possibly days earlier — a statement that the House Democrat said might be misleading.

“These actions raise serious concerns about the truthfulness of your sworn testimony before the committee,” Watson Coleman, a committee member, wrote in her letter.

Watson Coleman also demanded documents and answers to questions that she said would shed light on whether Adcock had misled the committee.

According to a Democratic aide, Adcock will be compelled to answer because these requests will be included in the committee’s “questions for the record,” which are generally sent after a hearing to gather more information from a witness.

The Agriculture Department did not immediately respond to an email about the letter or Adcock’s testimony.