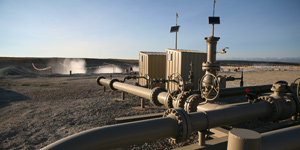 The Ground Water Protection Council report (PDF) that analyzed state oil and gas regulations also raises serious questions about the construction of the pits used to store toxic drilling waste and what happens when dangerous fluids are spilled.

The pits can contain oil-laden waste water mixed with hydraulic fracturing fluids and drilling mud brought up from well bores. Tests show they often contain large amounts of benzene and other carcinogenic compounds.

Of the numerous incidences of water contamination documented in a series of articles by ProPublica over the past year, many could be traced to spills or seepage from waste pits. New Mexico toughened its industry rules for waste pits last year after finding that water had been contaminated in hundreds of cases.

The GWPC report states that "[t]he containment of fluids within a pit is the most critical element in prevention of shallow ground water contamination" and emphasizes that 23 states require pits to be lined with natural or artificial liners to keep fluids from seeping directly into the ground. The report did not mention the correlating figure: that at least four states do not have this precautionary requirement. It also did not name those states, an important detail given that a few states can account for a large proportion of the nation’s drilling activity. (Getting that information requires analyzing all of the state regulations attached in the report's appendices (PDF) and repeating much of the research the GWPC already did.)

The report reveals that 17 states do not require that pits be kept at a distance from streams and rivers, and that 17 states do not explicitly forbid pits from intersecting the underground water table. Furthermore, less than half of the states surveyed have a specific cleanup standard when waste fluids or pits do spill.