The makers of TurboTax have long been luring customers into paying for a service that they promised the government they’d give away for free. Now they’re lying to customers to avoid giving refunds.

We’ve heard from 16 people who say they were denied refunds and told that the truly free version — Free File — is a government product that’s not run by TurboTax. Ten others reported being told that ProPublica’s stories were inaccurate, or that our coverage is “fake news” or “fictitious.”

None of that is true.

TurboTax’s Free File product is created and run by the company. It is offered as part of a deal between the tax software industry and the government. The deal is specifically designed to keep the IRS from creating its own free online filing system.

Several people gave us recordings of their calls.

Here’s audio from one caller, a graduate student in Virginia whose income was around $16,000 — meaning he easily qualified for TurboTax’s Free File. He was charged $105.

The graduate student asked the agent why there were no links to the actual free version — Free File — on the TurboTax website:

TurboTax Agent: “Because it is an IRS product we built for them.”

Caller: “But you guys are the ones managing it right?”

TurboTax Agent: “No, the IRS is the one managing it.”

Other readers also reported being told that TurboTax was not responsible for Free File.

“They said their free service is actually owned by IRS, not them,” said Becky from California.

Anna from Massachusetts said that a supervisor told her that Free File is “a government product that is simply branded as TurboTax.”

Christopher from Virginia said he was told “that the IRS uses the Turbo Tax platform for Free File but that TurboTax is not responsible for it.”

Laurie from Washington said she was told by a TurboTax agent that ProPublica was going to run a retraction. (Our stories are accurate, so there’s nothing to retract.) Laurie was charged $130 by TurboTax. Her adjusted gross income was just $376.

Other callers said that Intuit representatives told them the company has not given anyone a refund. That is also false. 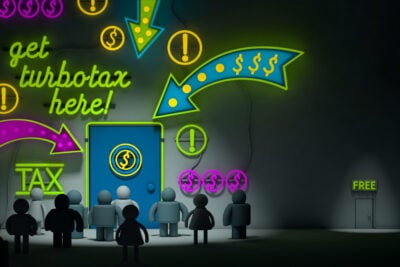 After our recent stories, we heard from dozens of people who reported calling the company and getting their money back.

The two suits, which cite ProPublica’s reporting, demand that the companies pay penalties and restitution for deceiving customers.

“Low-income people without someone to stand up for them have not been able to take advantage of what should be a free service,” City Attorney Mike Feuer said in an interview. “That’s wrong.”

He noted the suit was filed under the same law as his office’s high-profile case against Wells Fargo.

Asked about the lawsuit, an H&R Block spokesperson said the company “is proud to have helped millions of Americans with our four free tax filing options.” An Intuit spokesperson said in a statement: “Any suggestion that Intuit does not support the IRS Free File Program is flat wrong. We stand behind our actions as being both appropriate and consistent with our values.”

Update, May 9, 2019: Following publication of this story, Sen. Ron Wyden, D-Ore., ranking member of the Finance Committee, said in a statement: “ProPublica’s latest reporting provides more evidence of dirty tricks from Intuit. Customers eligible to file for free were allegedly denied refunds and given false information about the Free File program.”

Wyden, co-sponsor of a bill that would make the Free File program permanent — the fate of which is now in doubt — added: “While Chairman [Charles] Grassley and I have requested a review of the Free File program, Congress must move toward providing the IRS resources to create a direct-file system that allows taxpayers to file with the agency.”

In a separate development Thursday, four House sponsors of the same bill, including Ways and Means Chairman Richard Neal, D-Mass., and ranking member Kevin Brady, R-Texas, wrote a letter to the IRS calling on the agency to review the Free File program.

The letter asks that the IRS broaden a previously announced review of the program to “include a review of its own marketing practices for the program, current oversight of the program, and identify additional opportunities to improve taxpayer participation in the program.”

Have You Asked TurboTax for a Refund? Tell Us How It Went.

Fill out our form.

Have you worked for Intuit or another tax preparation company? We want to hear from you. Fill out our questionnaire or contact Justin at [email protected] or via Signal at 774-826-6240.