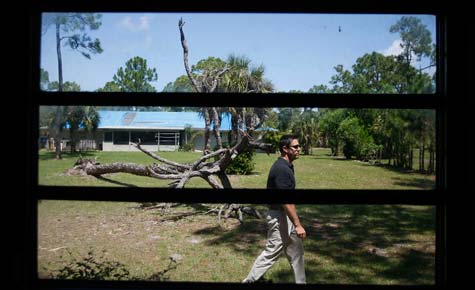 Since last spring, when President Barack Obama announced his administration’s plan to prevent foreclosures, there’s been a crush of homeowners seeking help from mortgage servicers. Confusion and delays have plagued the entire program, but the problems have been particularly acute for homeowners seeking a modification before they begin falling behind on their mortgage payments.

Some homeowners, like Regan Sciesinski of Florida, have been waiting as long as nine months with no relief. The Sciesinskis seem to be a prime candidate for a modification through the program. His wife, Stacy, was found to have breast cancer in late 2007, and in the past year, a combination of medical costs and reduced income have made their mortgage payments unaffordable for the couple, who have three children. Their home, in a suburb of Tampa, has also dropped about 25 percent in value since they bought it in 2006. Like millions of other homeowners, they’re underwater, stuck with mortgages worth more than the property.

Sciesinski says he first submitted his information to his servicer, Chase Home Finance, in March. He’s still waiting. Sciesinski says he and his wife have drained their retirement savings and accepted help from other family members to stay current. "We take our obligation seriously," he says, but now they’re facing default and need the modification "because having to move would completely devastate us."

The program was designed to help such homeowners: Borrowers who because of a hardship (a drop in income or jump in expenses) can no longer pay their mortgages. Homeowners who are still current on their payments are eligible, but the Treasury Department requires that servicers screen such borrowers more thoroughly, to prevent homeowners who don’t really need a modification from receiving one.

But those higher standards have contributed to the problems borrowers frequently experience with the servicers. As a result, many deserving homeowners aren’t getting help. Diane Thompson of the National Consumer Law Center said Treasury could help alleviate the problems by providing clear guidance to servicers on how they should screen out ineligible homeowners.

The overall mortgage mod program involves special incentives to encourage servicers and lenders to modify mortgages before homeowners default. It works by giving incentive payments to both the servicer and the owner of the loan (the lender or investors) to modify the mortgage; they can both receive bonus payments for modifying a loan that is current.

Yet since the beginning of the program, the servicers have been slow to modify on-time loans. In the early months, most of the major servicers, overwhelmed by homeowner requests, gave priority to the modification applications of delinquent borrowers. Not only were those more urgent cases, but they were easier for the servicers to modify: Under Treasury guidelines, servicers can skip verifying income and can instead immediately start trial modifications for borrowers who are more than 60 days behind on their mortgages.

In the past few months, most servicers have been having serious problems converting those trial modifications to permanent ones, primarily because of difficulty obtaining or processing the necessary documents. (As we’ve written, the servicers’ claims that borrowers are largely to blame for the trouble should be viewed skeptically.). But borrowers who are current on their loans but seeking a modification run into that document burden up front, and it has frequently prevented them from getting even to the three-month trial stage.

To screen such homeowners, servicers are required to evaluate the borrower’s total financial condition (income, costs, liquid assets, etc.). As a result, servicers have been requesting documentation from homeowners that can run into the hundreds of pages.

Still, despite the additional hurdles, some borrowers who are not behind on their loans have won modifications. For those and others among the 750,000 borrowers who’ve received trial modifications, the help has been meaningful. Borrowers have been saving an average of $550 per month through the modifications, according to Treasury.

Putting a precise number on how many trial modifications have gone to borrowers who are still current on their loans is impossible, because the Treasury Department has not released statistics showing what sort of borrowers are winning modifications. Tom Kelly, a spokesman for JPMorgan Chase, said the bank could not offer such a breakdown. The Treasury did not respond to our requests for comment.

Getting servicers to help  homeowners who have not fallen behind remains a major problem, housing advocates say, though there have been slight improvements. It was common during the summer for servicers to incorrectly tell homeowners that on-time borrowers weren’t eligible for the program. Thompson of the National Consumer Law Center said she hears fewer such complaints now, but says homeowners are still often told they’d have an easier time winning a modification if they defaulted.

Liz Caton, director of counseling services at Northwest Side Housing Center in Chicago, said she has represented homeowners who have received attention from servicers only after defaulting. "It’s unfortunate for homeowners who are in good faith trying to do the right thing, that servicers cannot act in the same good faith and verify hardship when there’s real hardship going on," she said.

It’s not just struggling homeowners who suffer when they can’t get a mod before falling far behind. The financial institution or investors that own the loan lose out, too. "The evidence is clear that modifications given to on-time borrowers perform much better than those given to delinquent borrowers," said Alan White, a professor at Valparaiso University School of Law.

Regan Sciesinski’s frustrations in trying to obtain a modification are typical. He says Chase has bounced him around from representative to representative, given him contradictory information, and told him his case was being "escalated" three times. He says he has called just about every week, sometimes daily. At the request of Chase, he’s submitted the same set of documents several times — and was asked last week to do so again, then told to ignore that request.

Kelly, the Chase spokesman, said last week the company had not moved "as fast as we wish" in processing Sciesinski’s application. But he also said Chase wasn’t entirely blame, as Sciesinski had changed from being self-employed to working for another company, a change that had required extra documents. Chase didn’t receive the "final documents with the new income" until October, he said, and the company expected to make a final decision "in the next two weeks."

Sciesinski says that’s not the case. He’s had the same job, as an auditor, for a couple of years, he says, and he submitted his complete paperwork back in August and even received a compliment from a Chase employee on the completeness of his submission.

Sciesinski says that if he’d known the process would drag on for so long, "we would have taken our chances and let the house go," salvaging the extra money to help with his wife’s health costs. Now with no financial cushion, he says the stress, and uncertainty of the last nine months "has already permanently damaged our family."

We’ve beenreporting on the Obama administration’s loan modification program, and we want to hear from homeowners who are applying for one.Tell us your story.