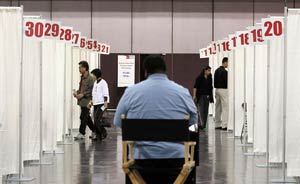 190,000 homeowners remain stuck in trial mods that have lasted over six months, still waiting to hear whether they’ll receive a permanent modification. Most of those homeowners will likely be dropped from the program.

Even homeowners who’ve successfully obtained a permanent modification have done so after months of waiting. The average trial modification at the servicer with the worst delays, JPMorgan Chase (the second largest in the program), has lasted over seven months before becoming permanent. Under the program’s guidelines, the trials are supposed to last only three months. The prolonged trials hurt homeowners by damaging their credit, increasing the balance of their mortgage, and preventing them from saving for the possibility of foreclosure.

Here is our interactive breakdown of the data. It shows which mortgage servicers are primarily responsible for the continued logjam.

The overall numbers for the program remain bleak: 1.24 million homeowners have begun a trial modification since the program launched last year. But so far more homeowners, 436,053, have been dropped from the program than have received a permanent modification, 340,459.

How Long A Permanent Mod Took
The average trial length for those that converted to permanent mods at the four largest servicers.

Since the beginning of the program, we’ve reported on problems homeowners have encountered with their servicer – lost documents, delays, and costly errors. Although Treasury Secretary Tim Geithner sharply criticized servicers for these problems earlier this year, so far it’s been all bark and no bite from the administration. The Treasury has yet to penalize any servicer for breaking the program’s rules.

Last month, administration officials said they’d extracted a promise from servicers that they would clear their backlogs by the end of this month. That seems unlikely, given the current pace.

The Treasury count of about 190,000 homeowners stuck in limbo is only a modest improvement from the 265,000 homeowners the government estimated last month were in limbo. In a conference call with reporters Monday, Herb Allison head of the TARP, which in turn oversees the loan mod program, said that it would "take another month or two" for servicers to work through their backlogs. He added that the level of homeowners being dropped from the program would remain high as those homeowners received their final answer.

Homeowners can be dropped because they fail to keep up the payments or because the servicer deems them ineligible. In the conference call, Allison attributed the high cancellation rates to the fact that some servicers had put homeowners into trials without requiring them to document their income. The Treasury changed the program’s rules earlier this year to require up-front documentation.

Given the high level of homeowners who are being dropped from the program, the Treasury has put new emphasis on what happens to those homeowners. About 49 percent have received modifications completely outside the government’s program, according to the new data. (PDF) Such modifications are not bound by the rules of the program and the terms vary from servicer to servicer. Some modifications don’t even lower payments: a portion even increases them. A report issued earlier this year by regulators (PDF) found that about 82 percent of private modifications decreased monthly payments (only half were substantial cuts, by 20 percent or more).