Judging from the conversation in Washington — “You’re a liar! No, you’re a liar” — it’s reasonable to conclude that many there no longer listen to the facts and it’s rare for journalists’ stories to make a difference.

That may be true in our nation’s capital, but our experience with our Local Reporting Network and with ProPublica Illinois shows that state leaders across the country are still listening and things can change.

Consider Connecticut. Jacqueline Rabe Thomas, a reporter for the Connecticut Mirror and a member of the Local Reporting Network last year, scrupulously documented how state and local officials have used political power and exclusionary zoning to block affordable housing in affluent towns, deepening a racial and economic divide in a state with some of the most segregated neighborhoods in America.

During her reporting, Gov. Ned Lamont, a Democrat, had said that he preferred to leave decisions about what affordable housing gets developed — or not — to local officials.

In a stunning reversal, the governor last week said he plans to tie state spending on transportation upgrades in affluent communities — such as new or renovated train stops — to local approval of more affordable housing projects.

“If you want some funding for that transportation hub, I want affordable housing to be a big part of that,” the governor told the Mirror’s “Steady Habits” podcast.

Also in January, California Gov. Gavin Newsom demanded tighter oversight and stricter standards for how sheriffs run local jails, after a yearlong investigation by Jason Pohl of The Sacramento Bee and Ryan Gabrielson of ProPublica showed that violence goes unchecked in some lockups and that state inspectors are powerless to enforce their own standards.

The 2020 budget proposal by Newsom, another Democrat, called for the Board of State and Community Corrections, which oversees jails, to take more aggressive and transparent steps when its inspectors find conditions that violate state standards.

These weren’t the only governors who took action after our reporting last year.

South Carolina Gov. Henry McMaster, a Republican, began requiring magistrates to disclose their disciplinary histories when applying for new terms on the bench. Joey Cranney of The Post and Courier had identified a loophole in state law that had allowed candidates to hide that information.

Rhode Island Gov. Gina Raimondo, a Democrat, signed a state budget that includes money to train 911 call takers on how to provide CPR instructions by phone after Lynn Arditi of The Public’s Radio identified mistakes some operators had made on calls. 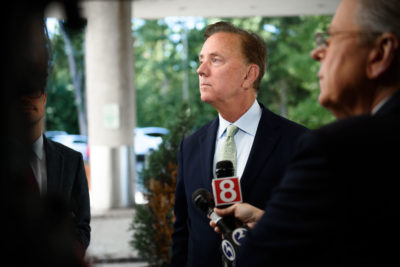 In one of the most segregated states in the nation, the governor and legislators are calling for new measures to entice towns to build more affordable housing.

Alaska Gov. Mike Dunleavy, a Republican, proposed changes to state law that would improve police hiring standards and oversight following an investigation by the Anchorage Daily News’ Kyle Hopkins that found some village police officers were sex offenders or had been convicted of domestic violence.

And New Jersey Gov. Phil Murphy, a Democrat, vetoed an extension of a corporate tax incentive program after WNYC’s Nancy Solomon and Jeff Pillets, working with Alex Mierjeski of our staff, documented how political boss George Norcross, his family and his associates had benefited from the program.

I don’t mean to suggest that governors are delighted every time we announce a new round of Local Reporting Network partners. In fact, in late 2018, when we announced that we’d be working with the Courier-Journal in Louisville, then-Kentucky Gov. Matt Bevin released a Facebook video criticizing us and the newspaper.

We told Bevin to hold his fire until we published our stories.

Turns out our investigation showed major problems with a program hatched by his predecessor to bring broadband internet to rural Kentucky. That program is now being reviewed again by the legislature, and Bevin’s successor (his predecessor’s son) may have an opportunity to act.

Amid the noise in Washington, D.C., our experience across the country shows that it’s still possible to publish stories that spur change as well as demonstrate the importance of preserving local journalism.